Junior Yoshi Andersen leads the Crimson with 49 goals this season.

Although the season is not yet over, the Radcliffe lightweight team has already made history. The team’s victory at the Head of the Charles was the squad’s first ever win in the event.

Two for the Price of One

Senior Aisha Price started in 14 women’s soccer games, tallying seven points, last fall before co-captaining the women’s water polo team in the winter and spring. She credits her coaches and Harvard’s Ivy League affiliation for allowing her to compete in two sports.

Freshman attacker Charlotte Hendrix, shown here in previous action, scored six goals at the CWPA Eastern Championships in Ann Arbor, Mich., over the weekend. The rookie finishes the season third on the team with 65 goals, behind sisters captain Aisha and junior Shayna Price.

On Wednesday, Richard Blanco, the inauguaral poet for President Barack Obama’s second term, spoke to an audience at the Winthrop House Junior Common Room about his writing and his evolving cultural identity as a member of the Cuban-American community.

In losses to top-ten powers California and Princeton, sophomore goalie Ariel Dukes only tallied five and seven saves, respectively. A day later, Dukes was sharper, making eight stops as her women’s water polo team topped the New York Athletic Club, and then accruing 10 saves in a victory over Villanova.

In the Harvard women's water polo team's matchup against the New York Athletic Club, freshman Yoshi Andersen tallied three goals in a 20-9 win. On the weekend, the team went 2-2, with its two losses coming to top-ten teams.

Duchess Of The Net

Sophomore goalkeeper Ariel Dukes rises up for one of her nine saves against Villanova in this weekend’s Harvard Home Kickoff. Dukes recorded 26 saves over the weekend in three Harvard victories. The Crimson takes to the road for the remainder of the season before Senior Day on April 3. 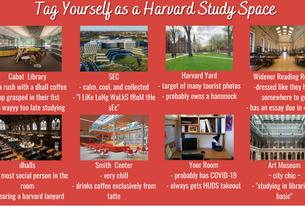 Tag Yourself as a Harvard Study Space