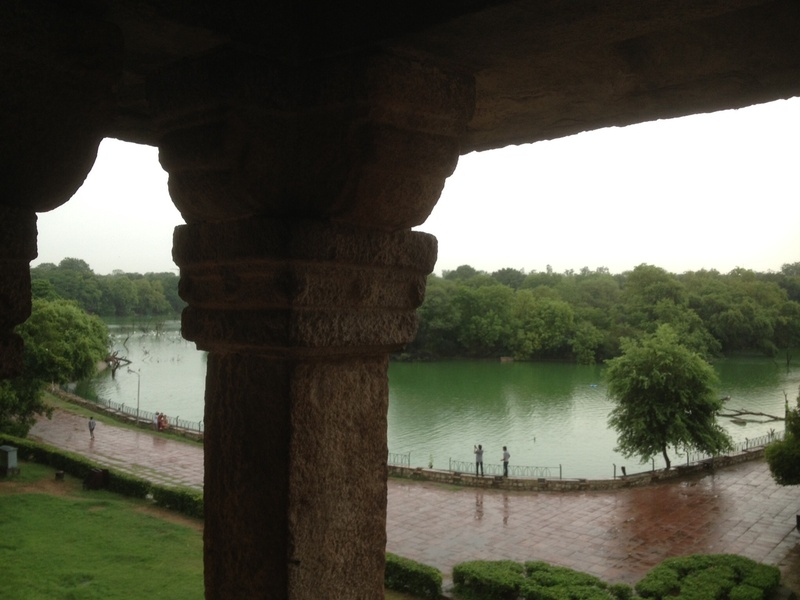 And the auto guy is singing a film song. It is almost raining. Singing, he drives slowly. In Khan Market women huddle under the archway between Fab India and a bookstore; the leaves flicker along Aurangzab Road. The air has the same pre-rain scent, iron and expectation, as the wet-root, weepy climate at home. And when the sky breaks it does so like a strip of fabric tearing, leaving humidity in long, loose fibers dragging against the ground. Don’t bother putting the curtain down, the driver says. It’ll stop soon. The water picks up, starts, slows.

There is the harsh pleasure of rain, and that of almost raining. One night it hardly comes, flagrantly, heat cut through by lightening and the wind’s sharp tongue. The small tipsy party leaving my fan-dizzy room finds the light has faded already; we’ve been in there for hours, ice melting on the tray, singing soul versions of old film songs, smoky Nina Simone. On the balcony the wind is just starting and the lightening cracks, singeing and stingy, chipping the clouds like shells off eggs. The rain stays circumspect; a few chubby drops roll down our eyelashes and elbows, buck dust from the ground. The clothes phantom from the line off the balcony, whipping fast across my arms as I unclip them to bring them inside. A slash of lightning, the line shaking like the halting metro. The ghost of a t-shirt, its flickering shadow, flies into the gali below.

Reina A.E. Gattuso ’15 is a joint literature and studies of women, gender, and sexuality concentrator in Adams House.