Sex and Power Blend in ‘Balcony’

Taking risks with a complex script, this HRDC production succeeds with a strong cast and accomplished technical elements 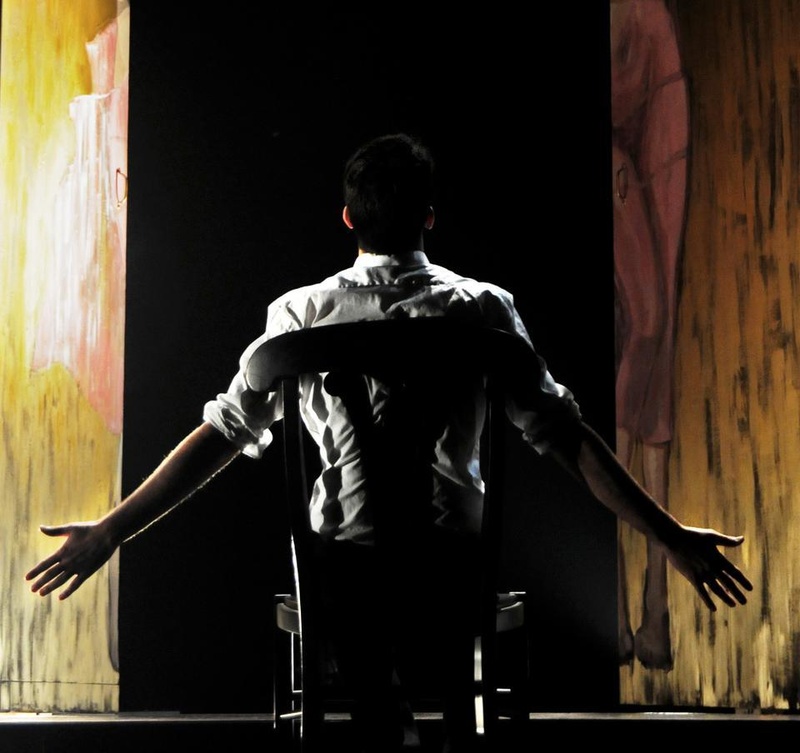 Dan J. Giles ’13, as Chief of Police, locks himself in a mausoleum in the final scene of the Mainstage’s “The Balcony.”

The Harvard-Radcliffe Dramatic Club’s (HRDC) presentation of “The Balcony” by Jean Genet, which runs through November 20 on the Loeb Mainstage, is a thoughtful production of a rarely staged play.

Most of “The Balcony” takes place in a brothel where male clients play out their fantasies of holding powerful positions: a bishop forces a sinner to confess; a general rides his mare. In the brothel, scenes like these are thoroughly decorated and scripted, so that in acting the part, a client can make believe that he inhabits it. Take the Bishop, played by a confident Nasir W. Husain ’12. Left alone in the room after a session, he stares at the mirror. “The majesty, the dignity that light me up come from a more mysterious brilliance... I wish to be a bishop in solitude,” he says, still wearing his ornate garb. This desire for status lies at the play’s core. The clients in the brothel’s “studios” nominally come for the sex, but what they really fetishize is the chance to see someone else’s reflection.

A second type of power struggle rumbles outside the brothel’s walls: a dangerous rebellion is fermenting as the customers play inside, and it risks overwhelming the entire state unless the Chief of Police (Daniel J. Giles ’13) intervenes.

This rebellion intrudes on the brothel and gradually subsumes its clients. Its slow invasion of the guarded space is one of the production’s triumphs. Moments of sexual play-acting often intentionally pause abruptly as loud cries from outside penetrate the brittle walls of the set, designed by Elizabeth Y.Y. Mak ’12 and Snoweria Zhang ’12. When the “judge” (Anthony J. Sterle ’11) tries to orchestrate a scene with his “thief” (Vanessa B. Koo ’12) and the “executioner” (Ilker Oztop, a Harvard Medical School student) in one of the brothel’s rooms, he is continually interrupted by news of the infringing forces and the sounds of other clients. It’s a tribute to the trio’s strong acting that the atmosphere of the scene shifts from sexual tension to fear so fluidly.

Such ease remains constant throughout most of the play. Director Matthew C. Stone ’11—a Crimson arts writer—has a terrific sense of space, and his production uses the Mainstage to full effect. As the role of the rebellion grows, the set begins to fall apart. Lighting and occasional smoke enliven some of the longer scenes; these touches also help fill out the large stage. Timing and sound, frequent problems for student shows, were perfect—Stone’s “The Balcony” is an unusually polished production.

His only disappointing decision was to remove much of the original play’s text. In his director’s notes, Stone explains that he cut about a third of the original script in order to “ground” the show. In terms of the production’s difficulty, the choice makes sense. Genet’s writing is layered with poetic turns and philosophical flourish, and it is nice to have a chance to savor the luxury of these lines without being rushed. The more realistic production also does away with some of the more garish elements of the play—characters on risers and heavy make-up, for instance—that might have been unachievable in a college setting.

The pared-down script, though, creates its own confusion. The last 20 minutes of the performance felt frazzled compared to the leisurely pace of what preceded them. At times it’s unclear whether obscure references are the intention of the production or the fault of the viewer.

This was especially true with the relationship between the brothel’s owner, Irma (Maria-Ilinca Radulian ’11) and the Chief of Police. Radulian is a strong actress, and her low voice and poised self-assurance make her a good fit for the iron-willed matron. The relationship, though, never fully takes off. Hastily explained, it is usually relegated to a side role in the scenes featuring the pair. Both Irma and the Chief have their own wills to power, so it’s not hard to imagine that their relationship is just an accessory to their other aspirations. But when Radulian yells, “But I still love you!” to the withdrawn Chief, these strong feelings seem incongruous.

Stone’s desire to make “The Balcony” more accessible by removing some of its more fanciful elements is admirable, especially when he and the cast do a thorough job of realizing that vision. But the production may have benefited from more engagement with the text. Stone is such an able director, and his cast so invested in the play, that the reductionist move comes across a little self-deprecating. What’s the point of using such a rich play if you’re not going to sink your teeth into it?