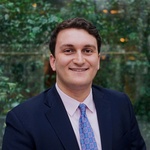 Spencer was a member of the 146th guard. He gratefully covered the men's hockey team for four seasons, from January 2017 to May 2020.

The Crimson impressed with its skilled, young core but at times struggled with inconsistency. An abrupt end to the season due to COVID-19 leaves many questions unanswered.

Being a Part of Something: Parting Shot

Whether The Crimson is part of your Harvard experience or not, I urge you to be part of something. It’ll give you so much to be thankful for.

The Crimson will host the Saints in a best-of-three series as part of the first round of the yearly conference tournament.

The Crimson nabbed a key emotional win for its seniors, but it failed to clinch a top-four seed in the ECAC and thus will not have a bye next weekend.

The Crimson hosts Rensselaer on Friday in a battle for a first-round bye in the ECAC playoffs. On Saturday, the team will entertain Union for senior night.

Harvard’s loss soils the emotional high of Friday’s statement win over the Golden Knights. The program, still with its eyes on a top-four finish in the ECAC, will close out its regular-season slate at home next weekend

The Golden Knights represent the highest-caliber opponent Harvard has defeated in 2019-2020 and the program’s first takedown of a top-five team since its Beanpot crown on Feb. 13, 2017.

The Crimson mustered just two points in a crucial weekend for ECAC standings as the conference tournament approaches.

No. 18 Men's Hockey Drops Beanpot Consolation to No. 7/6 Boston College

After a fourth-place finish in this year's Boston hockey classic, the Crimson will close out its conference slate hoping to keep its NCAA Tournament hopes alive.

Jack Drury and Nick Abruzzese continued their torrid streaks, and the second powerplay unit cashed in en route to a 6-2 victory.

No. 16 Men's Hockey Scores Eight in Win over Union

The Crimson earned its first win in the Frank L. Messa Rink since Jan. 2010.

PREVIEW: No. 16 Men's Hockey Duels No. 13 Northeastern in Beanpot Semifinal

In Monday's 5:00 p.m. game, the Crimson and the Huskies kick off the 68th Beanpot tournament, which promises to showcase high-end skill and competitive parity among Boston's hockey elite.

An eventful last five minutes, in which each team notched its only goal of the night, brought the game to overtime. But extra hockey could not provide a more conclusive result.

The Crimson came away with a decisive victory on a grand stage — one which it hopes will revitalize its season as the second half of the campaign begins.

The Crimson clashes with a storied rival on Saturday at the world's most famous arena.

How To: Survive Spring Semester