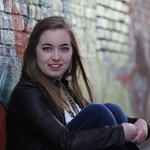 Tony-award winning actress Idina Menzel performs at TD Garden Friday night. Menzel, who is known for her roles in "Wicked" and "Rent," recently won an American Music Award for her performance in the soundtrack of "Frozen."

Mark E. Zuckerberg speaks at the 366th commencement ceremony Thursday afternoon. "Let me tell you a secret," he said, speaking about his experience at Harvard and founding Facebook. "Ideas don't come out fully formed. They only become clear as you work on them."

"You all accomplished something I didn't," remarks Mark E. Zuckerberg, Harvard dropout and founder of Facebook. Zuckerberg spoke at Commencement Thursday about idea development and purpose.

The Bee is Born

A cartoon about the then recently-frmed Bee Club, which appeared in The Crimson during the 1991-92 school year.

Flyby Appreciates: Small Things That Made Us Happy This Semester