In Photos: Elizabeth Banks, Hasty Pudding's Woman of the Year 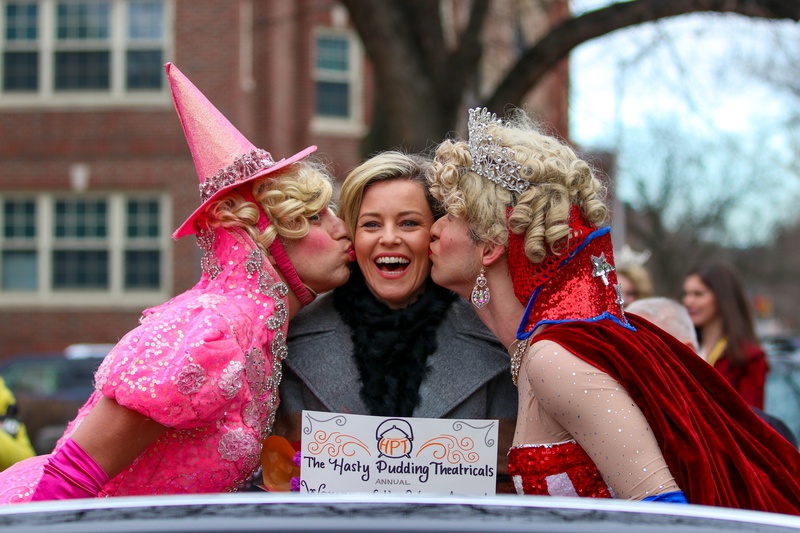 Elizabeth Banks rolled down Massachusetts Ave. on Friday afternoon in a Rolls Royce during the Hasty Pudding’s Woman of the Year parade, which was followed by a roast and press conference inside Farkas Hall. The actress, director, and producer was recognized with the Hasty Pudding’s annual honor, celebrated with a parade from Bow Street to Farkas Hall. With the acceptance of this honor, Elizabeth Banks joins the likes of Meryl Streep, Anne Hathaway, and Sandra Bullock.

Elizabeth Banks arrived Friday afternoon, stepping out of a black tinted car at the beginning of the parade route near the Inn at Harvard, and stepped into her car along with members of the Hasty Pudding Theatricals.

After kissing her on the cheek, Scott Kall '20, Cast Vice President of the Hasty Pudding Theatricals, wiped lipstick off Elizabeth Banks’ face.

As members of Hasty Pudding Theatricals walked and danced alongside the Woman of the Year, they posed for an iPhone photo with spectators of the parade. Many people in the crowd were taking photos of Elizabeth Banks and posing with members of the Theatricals.

Elizabeth Banks, who directed, produced, and starred in the 2019 edition of "Charlie’s Angels," posed with Elias W. Russell '20 and Scott Kall '20 during the parade.

After Elizabeth Banks exits the Rolls Royce upon reaching Farkas Hall, she joins members of the Hasty Pudding Theatricals in a short but fun dance on the steps of Farkas Hall. The parade ended at Farkas Hall where Banks was ushered inside for a roast, press conference, and preview of the Pudding's 172nd production.

In the quest to obtain her Pudding Pot, the Theatricals provide joke-filled challenges relevant to Banks's career. With reference to the 2001 film "Wet Hot American Summer," where Paul Rudd tells Banks she tastes like a burger mid-makeout, Banks proceeds to eat a bite of a burger and kiss a cutout of Rudd’s face.

After a roast, Elizabeth Banks receives an engraved Pudding Pot on the stage of Farkas Hall. After receiving her Pudding Pot, she headed upstairs to a press conference where she answered questions ranging from Oscars predictions to her thoughts about the preceding events of the day.

The Photos That Captured the 2010s