When Cassandra E. Euphrat Weston attended her first poetry slam in ninth grade, she loved it—but believed she’d never perform herself. “I thought, ‘This is something I cannot do,’” Cassandra says over coffee at Simon’s, near Porter Square. “It involves performing your own words, and that is inherently terrifying.”

Today, Euphrat Weston’s clear-eyed confidence belies her former timidity. Arriving at our interview in a head-to-toe dragon costume (a woman stops by the table to gush, “That fabric is beautiful!”), she speaks in measured tones, her head cocked slightly to the right while she discusses the nuances of performance poetry. “It’s terrifying,” she repeats, about performing her words on stage. “It’s also very powerful.” After getting involved with Youth Speaks, a spoken word nonprofit in San Francisco’s Bay Area, she began to participate herself.

During her freshman year at Harvard, Euphrat Weston, along with her friend Kyra A. Atekwana ’14, was disappointed by the lack of spoken word groups on campus. The two applied for funding to run a program over Harvard’s first Optional Winter Activities Week. That spring, they founded Harvard’s first spoken word organization, Speak Out Loud. To date, the organization has collaborated with a number of other clubs on campus. Euphrat Weston says she enjoys broadening Speak Out Loud’s reach and audience, because, as she puts it, “If our words are beautiful and well-crafted, but in an echo chamber—that’s not helpful.”

Indeed, for Euphrat Weston, spoken word is intimately tied to activism and social change, particularly regarding issues of identity. “One of the first, powerful things that spoken word can do is give people a tool to understand and claim their own identities—including the ways identity can shift,” she says. “And that’s fundamentally important to making other kinds of change happen.” A Youtube video from April 26 shows Euphrat Weston dressed in gray jeans and a vest, seated in front of a blackboard, performing “Letter to my Next Door Neighbor.”

“Did you read the news?” she says, her hands clasped together. “A teenager was set on fire for being gay. Which at least is proof to rally around, right? See, that’s what words like dyke can do—right, Patricia?”

Euphrat Weston admits that there are limitations to this kind of activism. And she’s acutely conscious of her own relationship to spoken word—“I grew up with a lot of privilege,” she says, and since part of spoken word, to her, is about giving voice to those without one, she’s struggled to figure out where her own voice can be useful. Spoken word is only one part, she says, of understanding and then addressing structural issues of inequality. But she’s convinced that spoken word can play an integral role in articulating what needs to change.

As a member of the Dudley Co-op, Euphrat Weston spends much of her time “eating other people’s delicious food,” she says. She’s also been a staff writer for Manifesta Magazine and volunteers with PBHA’s Athena program.

But she made the “conscious choice,” she says, to avoid the resume-stacking that she sees as part of Harvard’s culture, and to concentrate on a few chosen activities instead. Elected to Phi Beta Kappa as one of this year’s Senior 48, Euphrat Weston is also deeply committed to her studies in literature. Her thesis focuses on the intersection of spoken word and gender. “To no one’s surprise whatsoever,” she says, with a shrug and a laugh. 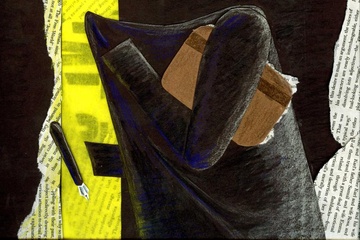 By Alexander J.B. Wells
On Campus

Portrait of An Artist: Teake '12

By Henry A. Shull 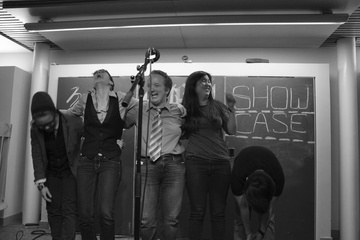 By Emilie G.C. Thompson
On Campus

The Mic is Yours