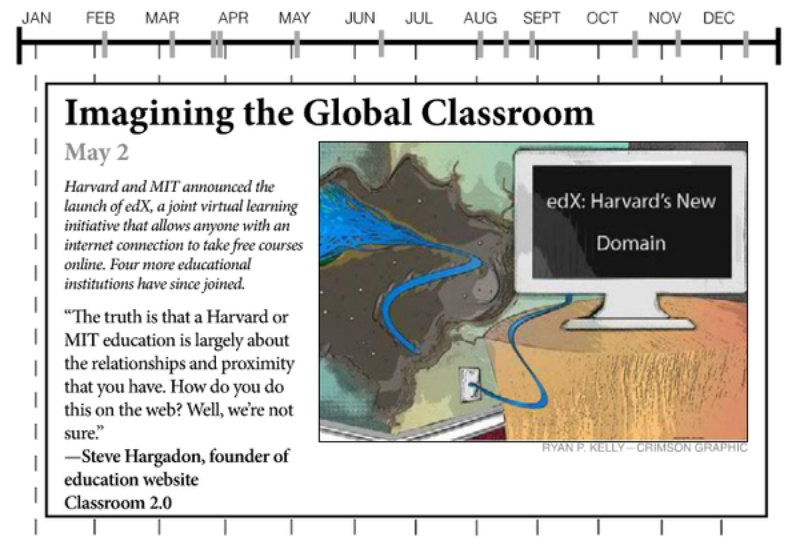 While some of those stories captivated the attention of people outside of Cambridge for a moment, others had a sustained and meaningful impact throughout the year on Harvard’s campus. On the last day of the year, The Crimson looks back at the 12 stories from 2012 that mattered the most at Harvard.

Capping off months of efforts to tighten its grip on student alcohol consumption, the College released a new set of guidelines in March regulating drinking on campus. The new rules loosened restrictions on hard liquor at formals, while simultaneously seeking to curb dangerous drinking games. Though the new policy was intended to standardize regulation of alcohol across Harvard’s 12 Houses, it drew criticism from the start for vague language that some said left enforcement up to the discretion of individual tutors and gave no clear indication about whether students were permitted to play beer pong. The new policy was approved by the faculty in the fall, but not before professors voiced reservations about whether it could actually be enforced.

Administrators sought to involve students as they drafted and finalized the policy—but undergraduates showed little interest in participating. Following a series of sparsely attended meetings last fall while the policy was being crafted, administrators held three more meetings in April to solicit feedback on the new regulations that drew a total of only five students.

Students started paying closer attention to the new policy when the perceived crackdown spread to the streets. When students returned to campus in the fall, rumors of a police crackdown on partying temporarily dampened the late-night weekend scene. Spokespeople for the Harvard University Police Department and the Cambridge Police Department later confirmed the increased weekend police presence, saying it was intended in part to keep students safe by keeping closer tabs on their alcohol consumption. But in a panel discussion several weeks later, HUPD Chief Francis “Bud” Riley told students that police had not arrested any students that year for alcohol violations and did not plan to start enforcing underage drinking laws any differently.

11. The Rise of a Harvard Basketball Standout Sparks Linsanity

A little over a year ago, professional basketball prospects for Jeremy Lin ’10 looked pretty bleak. After the Golden State Warriors waived him last December, he was signed by the Houston Rockets days later only to be released on Christmas Eve. After agreeing to a contract with the New York Knicks shortly thereafter, Lin received minimal playing time in his first few months and even spent time in the D-League.

But that all changed on Feb. 4. With the Knicks struggling, having lost 11 of their last 13 games, coach Mike D’Antoni turned to Lin, who was in jeopardy of being cut again. And the former Harvard standout delivered, earning 25 points and seven assists to give the Knicks a much-needed victory.

His success hardly stopped there. Behind Lin, the Knicks won nine of their next 12 games, highlighted by Lin's 38-point outburst in a 92-85 victory over the Los Angeles Lakers, and ultimately earned a playoff berth. In the process, Lin sparked a phenomenon later to be known as “Linsanity” that took Harvard by storm, surprising and exciting both students and former teammates and, according to long-time Knicks fan Spike Lee, “elevating the [Harvard] brand.”

A knee injury at the end of March sidelined Lin for the rest of the year, but by then he had already left a lasting mark. And despite the meteoric rise of Lin, named in Time Magazine's annual list of the 100 most influential people in the world, he nevertheless maintained his characteristic humility, according to close Harvard friends.

In July, Lin left the Knicks and moved back to the Rockets—the team that had released him just months before—after signing a three-year, $25.1 million dollar contract.

A year after an anonymous essay published in The Crimson entitled “I Am Fine” sparked a campus-wide discussion about mental health, the sensitive topic of suicide played into the continuing conversation about students' psychological and emotional well-being.

This year, the student body received three emails from Dean of the College Evelynn M. Hammonds with the subject line “Sad News,” each announcing the death of an undergraduate, including one that said that the student had taken his own life. Days after one of the other emails was sent, several media outlets reported that that student had also died by suicide. As the campus community coped with the painful news, student groups continued to expand on previous efforts to address the sensitive topic, while administrators affirmed their commitment to supporting mental health on campus. Working towards a solution, Hammonds created a committee to examine sources of and solutions to student stress. For many, The Crimson served as an outlet to express opinions and share experiences in the response to tragedy.