Warren in Lead Before Election 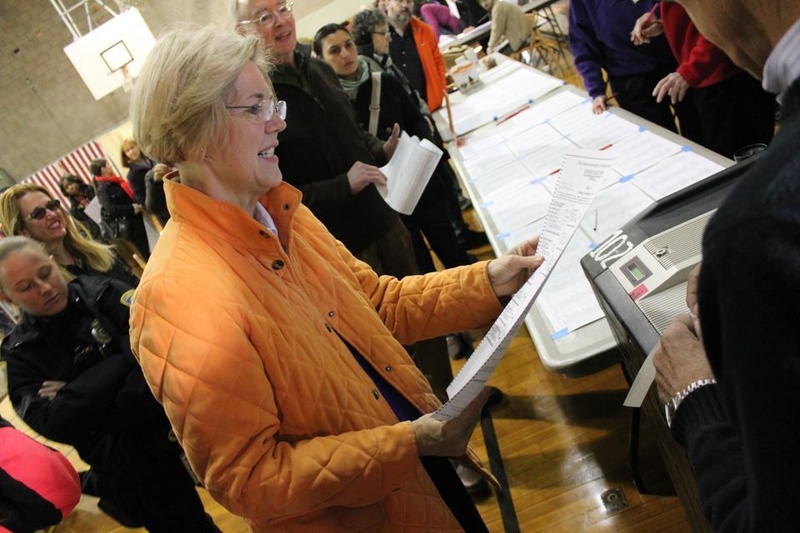 With more than a year of campaigning behind her and millions of dollars raised and spent, Harvard Law School professor Elizabeth Warren arrives at Election Day the cautious front-runner in Massachusetts’ hotly contested U.S. Senate race.

“Elizabeth Warren goes into Tuesday having been in the lead or tied in virtually every public poll with the exception of one or two [in recent weeks],” Democratic strategist Mary Anne Marsh said, calling Warren the “prohibitive favorite.”

“I think Brown supporters are just as enthusiastic as Warren supporters, but she has the advantage of the party and union machinery, giving her an organizational edge,” said Republican strategist Todd Domke of Brown’s chances.

Warren has built on that advantage with an impressive grassroots organization of her own. Warren’s press secretary Alethea Harney said campaign volunteers knocked on over 200,000 doors last weekend and made 600,000 phone calls. Harney said she expects 20,000 Warren volunteers will be deployed Tuesday to get voters to the polls.

Massachusetts Secretary of State William F. Galvin predicted that between 3.1 and 3.2 million voters will go to the polls statewide. If achieved, that total would be the highest in state history, and likely give Warren enough of an advantage to secure victory in a state where registered Democrats outnumber Republicans three-to-one, Marsh said.

Brown, who was swept into office on a wave of Tea Party energy two years ago, has not been able to replicate the excitement and support his candidacy generated in the 2010 special election, Domke said. In a state as blue as Massachusetts, Republicans are rarely re-elected to statewide office.

Brown’s vote tallies will also likely be hurt by Democratic President Barack Obama’s popularity. Assuming Obama wins Massachusetts by 20 points or more, Brown will have to win over a significant number of those Obama supporters, Republican strategist Rob Gray said.

“Most Democrats would be walking away with this, but the fact is...Massachusetts simply does not elect women to higher office,” Marsh said. If elected, Warren would become the first female U.S. Senator from Massachusetts.

Regardless of who comes out ahead, Marsh and others said they expect the margin to be close.

Early on in the race, polls indicated that Warren and Brown were neck-and-neck. Warren’s candidacy appeared to be floundering in early September, but analysts said Warren’s strong debate performances in September and October, coupled with key endorsements and improved advertising, pushed Warren into the lead.

—Staff writer Nicholas P. Fandos can be reached at nicholasfandos@college.harvard.edu.

In Cambridge, No Contest