Signed “Class of 2015” pledges to be hung in freshman entryways 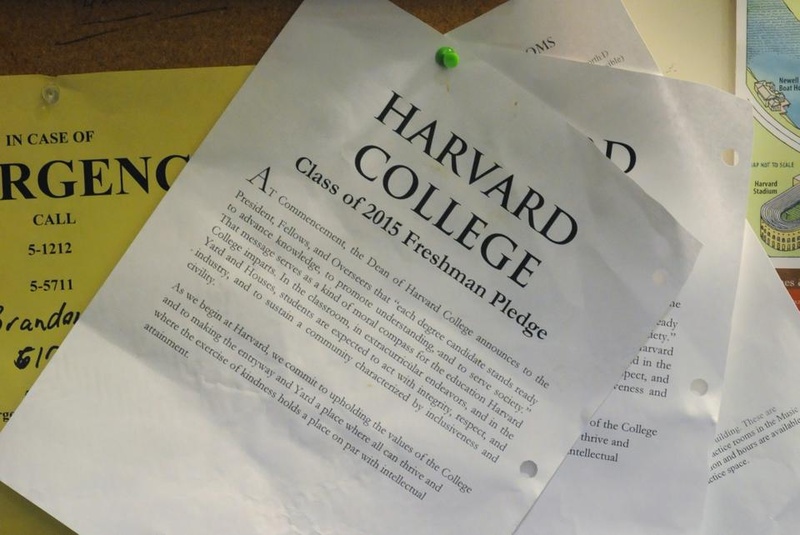 Members of the Class of 2015 were required to sign a pledge expressing their dedication to education and commitment to community.

This year Harvard freshmen started what administrators hope will be a new tradition: they signed a pledge promising to uphold values tied to the College’s mission.

The “Class of 2015 Pledge” committed students to transforming Harvard into a “place where all can thrive and where the exercise of kindness holds a place on par with intellectual attainment.”

That decision drew fire from former Dean of the College Harry R. Lewis.

Though students were told that signing the pledge was voluntary, most proctors are displaying a signed copy of the pledge somewhere in their entryway. Critics say, if a person opts out of the pledge, their decision to do so would be broadcast for all to see in the form of a blank, unsigned line amidst a sea of signatures.

“The most important thing was to get our values out. Things like respect, integrity, kindness,” Dean of Freshmen Thomas A. Dingman ’67 said. “We want to have an environment in which people can flourish academically.”

Dingman said that the introduction of the pledge was motivated not by a specific incident, but by growing concerns that some Harvard students are not “thoughtful or considerate in their actions with their peers.”

Administrators also said that this effort is not connected to discussions of academic integrity, and that the 2015 pledge is not an early attempt at an informal honor code.

Many freshmen said that although the content of the pledge may have seemed intuitive, they appreciated the attempt to vocalize the College’s values.

“I think it was great that they actually put it in writing,” Pennypacker resident Denise I. Acosta ’15 said. “It kind of made everyone more comfortable.”

Students signed the pledge before the third annual convocation ceremony in Tercentenary Theatre.

Lewis first articulated his criticism of the pledge in a blog post that attracted the attention of The American Council of Trustees and Alumni—a national non-profit.

Linking this most recent development to controversial freshmen orientation programs at the University of Delaware and Hamilton College, ACTA program associate Max Brindle said that “pledges like these harm intellectual communities more than they benefit them.”

Despite Lewis’s concerns, many freshmen said that they had not heard of any of their classmates declining to sign the pledge.

“There might have been a little bit of pressure because most people were signing it and it’s going to be in public view,” said Ari Albanese ’15. “But I don’t think anyone was really against it.”

The pledge came out of a committee of students and administrators, including Dingman, Freshman Yard deans Jonas V. Clark and Catherine R. Shapiro, and Secretary of the Administrative Board John “Jay” L. Ellison.