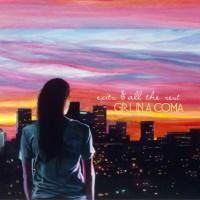 Girl in a Coma writes songs like dreams. In the moment, they are gripping, tense, and wild. They engulf you into their drama whether you like it or not. Yet after they’ve ended, there comes that eerily empty feeling that nothing really happened in the first place. There were thoughts and feelings and ideas and events that seemed at the time of dire personal importance—but all of a sudden it seems unclear what it was all about, what it meant, and what it was trying to say. The more you try to grasp onto something solid and sensical in the whole flurry, the less there seems to be.

This is not to say that their latest album is a nightmare—far from it. “Exits & All The Rest,” the Texan rock trio’s fourth release, features some powerful anthems and a couple of moving melodies. But the entire album comes off as an exercise in musical suspense and suggestion, a rock ramble that manages to evoke everything from coy sensuality to dramatic defiance without investing any of that with the least speck of importance.

The few victories of the album are due in large part to the vocal stylings of lead singer Nina Diaz, who has been singing with the group since being recruited by elder sister and drummer Phanie at thirteen. Nina’s skillful versatility lets her move seamlessly between the silken sultriness of Norah Jones and the husky violence of Joan Jett, also the group’s producer. Her softer side comes through best on mournful ballad “So,” which opens with a drunkenly swaying beat, lilting and confused. When Diaz slips into her first lyric—a thought about chasing rabbits that immediately recalls Jefferson Airplane’s “White Rabbit”—it’s almost as though she’s slipping into something a little more comfortable, as they say. You can almost see her lips caressing each word as it escapes her.

Her violent side, on the other hand, doesn’t fully bare its teeth until the anthemic album closer, “Mother’s Lullaby.” If Girl in a Coma does anything well, it’s suspense, and they put out all the stops for this breakup ballad. The song, which begins with slightly melancholy memories, slowly and tantalizingly builds tension into a defiant and embittered refrain. “You took from me all you had to take / Now you’re looking for the great escape,” Diaz wails at the climax.

Yet if Diaz the younger can take credit for much of the album’s appeal, she is also to blame for their eminently forgettable quality. It seems impossible for her to refrain from playing with all sorts of distorting and distracting vocal ornamentation. In an annoying sort of affected nonchalance, she twists her vowels out of shape and rarely bothers to touch her consonants, to the extent that her lyrics become absolutely incomprehensible. In her more impassioned forte moments, there is just no hope of understanding what she might mean.

The ostensible vocal indifference is by now a convention in rock, and it’s entirely forgivable on music with independent merit. But Girl in a Coma’s memorability problem is only compounded by their oddly inconsistent songwriting. They have a knack for beginnings—as evidenced, for instance, by the cleverly constructed counterpoint that opens “She Had A Plan”—but the real meat of each piece on “Exits” is essentially a repetitive series of standard rock refrains. Opener “Adjust” is, perhaps ironically, one of the worst culprits here. Then again, the jarring and thoughtless “Hope” gives it a run for its money, especially considering its incessant background cymbals.

Yet, as on all the other tracks, the final strains of “Sly” and the last of the blares on “She Had A Plan” fail to linger after they’re over. These songs may offer catharsis, maybe even intrigue, but they still lack melodic hooks, catchy beats, and insightful lyrics. They fade away into oneiric oblivion as soon as the music ends.