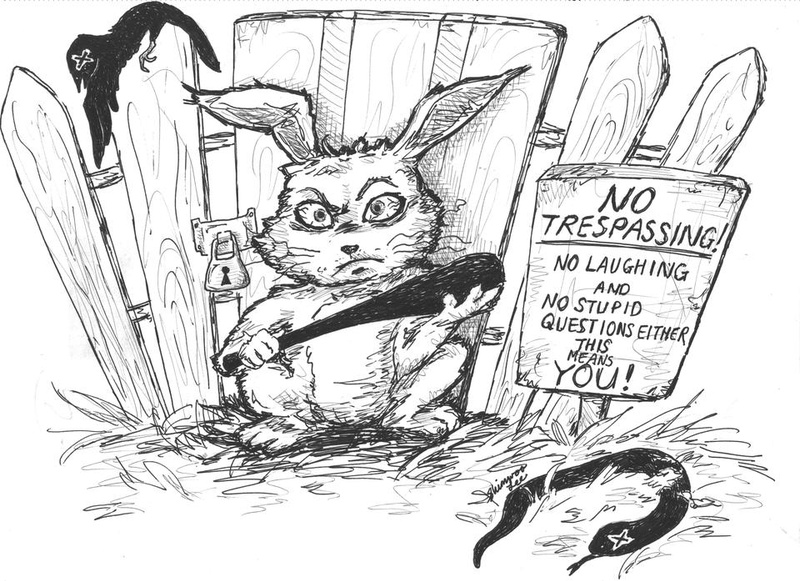 For David Sedaris, a world in which animals can speak and laugh is no fairyland of saccharine woodland friends. Instead of playing mildly about a brook, a well-meaning squirrel loses his romance to common prejudice, a mouse lures a brood of young toads away from their mother to feed her pet snake, and an overzealous guard-rabbit disfigures a benevolent unicorn to make a point against trespassing. Bambi and Thumper are nowhere to be found; in their place are self-serving brutes prone to flattery, deceit, and rampant hypocrisy.

In the self-proclaimed bestiary entitled “Squirrel Seeks Chipmunk”—something of a departure from his comfort zone in discursive autobiographical humor—Sedaris does away with the stock characters found in just-so stories and cautionary tales. Instead, he builds on our basic animal associations to craft psychologically complex personages who attempt to make sense of the unsympathetic world of feral beasts. Their stories constitute a darkly sophisticated collection of witty satirical fables, dramatized with gruesome scarlet and grey illustrations by Ian Falconer.

Each of these mock-fables, which bear distinctly Aesopian titles like “The Motherless Bear” and “The Migrating Warblers,” features a protagonist blinded by narrow-mindedness or—at the very least—burdened with an annoying quirk. Sedaris often exploits our natural tendency to project personality types on other species in deciding which weakness to ascribe to each animal. Thus, the toad uses aggressively revolting language; the faithful setter finds himself cuckolded by his wife; and the naïve young chipmunk finds herself wondering what “jazz” could possibly be—“What if jazz was squirrel slang for something terrible, like anal intercourse?” she wonders. Conversely, the author also flips our most obvious associations inside-out for an element of surprise, as when a parenting stork explains sex rather bluntly to her own offspring: “I said that you were not conceived of mutual orgasm and that it probably affected your ability to empathize, remember?”

The real humor behind these characters, however, derives less from our familiarity with animal stereotypes than it does from a kind of self-recognition. These feral protagonists are prey to uniquely human hypocrisies in distinctly human scenarios. In the same breath as he dreams up violent revenge against a demanding black snake bouncer—“I should have smeared an apple with shit, opened up her big fat mouth, and forced it down her throat”—the toad denounces a duck for his “racist” suggestion of a watermelon instead. Even while the betrayed setter nurses his pride after his wife bears the puppies of a bull terrier across the street, he relishes his commission to mate for his master’s purposes: “Some might define this as cheating,” he says of his four consecutive rounds with one setter, “but I just call it being thorough.”

Even as he condemns such hypocrisy, though, Sedaris rarely moralizes about it. On the contrary, he targets moralization itself as an object of mockery. One of his most repulsive protagonists is a narrow-minded brown hen who ascribes her sister’s untimely slaughter to her homosexual thoughts, and her friend’s death by predator to her vegetarianism. Similarly, in another fable a healthy lab rat blames her ailing companion’s artificially-injected diseases on his own negative outlook: “Some interpret it as overexuberance, but to me it’s a kind of vaccine—as long as I’m happy and I love everybody, I can’t get sick,” she babbles. Ironically enough, and perhaps not too appropriately, “The Judicious Brown Chicken” and “The Sick Rat and the Healthy Rat” are two of the few stories among the collection in which the hubristic protagonists meet an unambiguously deserved fate; here, the author is almost moralizing against moralization. Nonetheless, his point about patronizing ethical lessons is lucid enough: in these and in other stories, he expounds upon a vision of an unjust and unfeeling world that does not admit of arbitrary ethical structure. He describes the world of wildlife, and by implication our own, as one that does not deliver comeuppance to those who live in their own narrow-minded shells.

By framing such satirical condemnations as a bestiary, Sedaris also makes room for all the exaggerated drama of competition and death naturally occurring in animal life. In one parable, he mocks a miserly cow who chooses a turkey for a secret Santa simply because she knows he will be slaughtered before receiving her gift. In another, a willfully ignorant rabbit murders all those animals who dare question his defense of a useless gate attached to no wall; the fresh corpses of these creatures then attract further incredulous visitors to annoy the pedantic guard.

The gruesome facts of life in the wild quickly propel the plots of his short fables into comically ridiculous dramatic circumstances. To the author’s merit, though, this layered absurdity does not devolve into outlandish melodrama. Throughout his stories—whether narrated in the first- or third-person—Sedaris maintains the deadpan tone of a fairytale narrator who puts forth his fables as gospel. This straightforward style lets the characters’ illogical quirks speak for themselves, as Sedaris himself takes on the role of an objective observer.

Framed as they are by such direct language, his few forays into floral rhetoric become more powerful in their rarity. In dealing with such dark humor, Sedaris cannot escape a few moments of unadulterated hopelessness. In one such case, an ambitious owl threatens the life of a captured rat unless he provides his captor with some interesting fact. As he fails to think of something, the owl narrates, “his body relaxed beneath my talons, and I felt his hope leak onto the asphalt, as surely as if it were blood or urine.” Likewise, as the innocent chipmunk reflects back on her failed interspecies romance with a squirrel who liked jazz, she falls into a kind of wondering regret. “She forgot the definition of ‘jazz’...and came to think of it as every beautiful thing she had ever failed to appreciate: the taste of warm rain; the smell of a baby; the din of a swollen river, rushing past her tree and onward to infinity.”

Even once the exhilarating sting of Sedaris’ sharp humor wears off, these few bleak moments linger on as an aftertaste. The laughter he inspires turns out to be nothing but a spoonful of sugar, a quick pleasure to sweeten his dose of healthy chastisement.