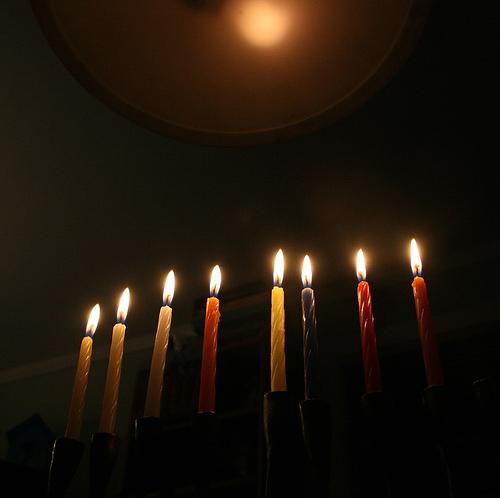 Adam Sandler explained it best: "Hanukkah is the festival of lights. Instead of one day of presents, we get eight crazy nights."

That about sums up the holiday. But thankfully, there's more music than just Sandler's humorous song to keep you humming as you spin dreidels and eat latkes (or, more likely given the timing of the holiday this year, as you pray for the miracle that one can of Red Bull lasts for all eight nights of finals period).

Here are Hanukkah songs for every candle:

1. "Light One Candle" by Peter, Paul and Mary

This beautiful song poses big questions like "What is the memory that's valued so highly that we keep it alive in that flame? What's the commitment to those who have died when we cry out they've not died in vain?"

These Hebrew classics retelling the glories of the Hanukkah story have been around for ages. Now they're on YouTube.

Renowned Jewish songwriter Debbie Friedman sings here not just about the uncomfortable physical experience of being a latke in a blender but also of Jews' obligation to help the homeless and hungry.

No list of Hanukkah songs is complete without the one you probably had to learn in elementary school on the same day that you put up a Christmas tree and colored pictures of Kwanzaa candles. Bonus: Watch Jeremy Lin try singing it.

P.S. If you want to expand your repertoire of music about spinning tops, try "S'vivon." But really, there's not much to say about a top. The lyrics of that one, in Hebrew, essentially say, "Little dreidel, spin, spin, spin. Hanukkah, what a good holiday."

5. "Can I Interest You in Hanukkah?" by Jon Stewart

The incomparable Jon Stewart tries to convince Steven Colbert to try a holiday that he sells as "not my least unfavorite time of year."

'Next to Normal' a Resounding Success