Women's Basketball: Around The Ivies 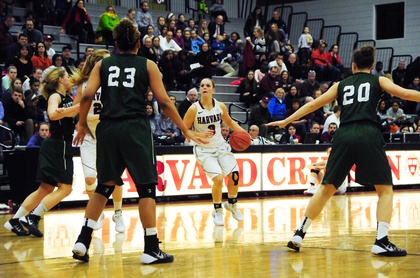 The women's basketball team looks to break its string of second-place finishes in the Ivy League when it begins its season Saturday.

Having come in second in the league for the past six years, this Crimson squad is itching to return to the top. Though Harvard graduated its top scorer in guard Christine Clark ’14, the team welcomes four talented rookies and returns senior forward Temi Fagbenle, who averaged 13 points per game last season.

Fagbenle will be one of three 6’4” women on the Crimson’s squad, but the most experienced of the bunch.

After finishing last season 4-10 in the Ivy League and 10-18 overall during longtime coach Jean Burr’s last season at the helm, the Bears will turn to first-year coach Sarah Behn. Behn has big shoes to fill, as Burr retired as the winningest coach in Brown women’s basketball history after 26 years. Senior guard Sophie Bikofsky should lead the Bears’ offense again this year.

Bikofsky led the nation in shooting from deep last season and will be crucial to Brown’s offense again.

Columbia hasn’t had a winning record since the 2009-2010 season when the Lions went 18-10 overall. Last year was no different, as first-year coach Stephanie Glance led Columbia to a 6-22 record that saw the team go 3-11 in conference play. Columbia finished tied for sixth in the conference preseason poll with Dartmouth, despite returning many of its top players from a season ago.

Oliver should be featured heavily alongside senior guard Miwa Tachibana on this veteran squad.

The Big Red, which finished fifth in the conference last season, looks destined to remain in the middle of the pack again, as it was picked to return to that fifth-place spot in the preseason poll. Cornell lost its leading scorer and rebounder from last season to graduation in Allyson DiMagno, who led the team in scoring last season and was the first Big Red player to score over 1300 points and grab 900 rebounds for the program.

The Big Red will likely rely on Marshall, who was named Ivy Rookie of the Week five times last season.

The Big Green look to improve upon last season’s finish at the bottom of the Ivy League and last season’s offense, which had the lowest scoring output conference wide. To do so, Dartmouth’s second-year coach Belle Koclanes will lean heavily on sophomore Fanni Szabo on the offensive side of the ball.

Szabo put up 13.2 points per game last year as a rookie, good enough for eighth overall in the Ivy League.

The reigning Ancient Eight champion returns this season without guard Alyssa Baron, who averaged 14.9 points per game last year. But don’t count the Quakers out—they’ll be more than equipped to defend their title with center Sydney Stipanovich, the reigning Defensive Player of the Year and Rookie of the Year. Penn will have a chance to show off its talent early on with its season opener against No. 4 Tennessee.

The sophomore, who recorded 99 blocks last season, will be huge on both sides of the ball for Penn.

After winning the Ivy League title every year since 2009, the Tigers conceded their crown to Penn last year. With four of five starters returning, Princeton should be in a good position to reclaim its familiar position atop the conference. The team tied with Penn for first in the media preseason poll and will likely rely on the play of top-scoring guards Blake Dietrick and Michelle Miller.

If Yale, picked fourth in the preseason poll—where the team finished last year—wants to crack into the top three, it’ll have to fare better in two three-game stretches that feature Harvard, Penn, and Princeton in consecutive games. The Bulldogs went 0-6 against the big three last year. This young Yale team will look to senior guard Sarah Halejian to make plays down the stretch.

Last year’s Ivy leader in assists, Halejian will be Yale’s only senior on the team this season.

TAGGED: Women's Basketball, Sports Blog, Around the Ivies Plus