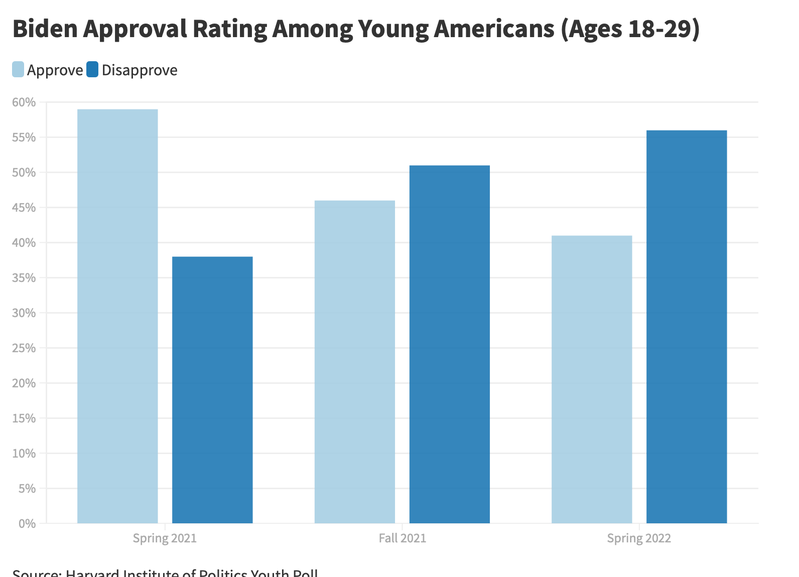 The findings from the IOP’s biannual youth poll of Americans between 18 to 29 years old show Biden’s approval rating is down five percentage points from the fall 2021 edition of the poll and 18 points down from spring 2021.

Della Volpe noted, however, that Biden has lost more of his own voters compared to his predecessors Donald Trump and Barack Obama. Of Trump’s 2016 voters, 82 percent approved of his performance during the 2018 midterms. Meanwhile, 88 percent of Obama voters in 2008 and 80 percent of Obama voters in 2012 approved of him in 2010 and 2014, respectively.

“Only 69 percent of young Americans who voted for President Biden in 2020 approve of his job performance today,” said Della Volpe, who served as an advisor to Biden during the 2020 presidential campaign. “Those people who disapprove today, but who voted for him just a year and a half ago — they rate him much more harshly on the economy.”

Harvard Public Opinion Project Chair Alan F. Zhang ’24 said in an interview that Biden’s lower approval ratings within his own base were “concerning,” but added that the drop in approval comes from “voters that he can win back.”

“These are people who voted for him once already,” Zhang said. “It wouldn’t be too much of a stretch to get them to vote for him again.”

Significant portions of marginalized groups reported feeling “under attack a lot,” according to the poll’s findings. Nearly three-fifths of young Black Americans said they feel “under attack a lot” in the United States as did 45 percent of BGLTQ youth.

The mental health of young Americans has not improved despite the easing of Covid-19 safety regulations, according to the poll. A majority of respondents described having feelings of depression, and over two-thirds said there is a mental health crisis in the U.S.

Zhang said the poll’s findings are evidence of the mental health crisis, explaining that the findings show “tens of millions of young Americans” are suffering from mental health issues.

“We probed some potential contributing factors to mental health this semester,” he said. “And we found that politics and news media were by far the most destructive to mental health for this generation.”

“Mental health should absolutely be a priority — it is perhaps the crisis of our generation,” Zhang added.