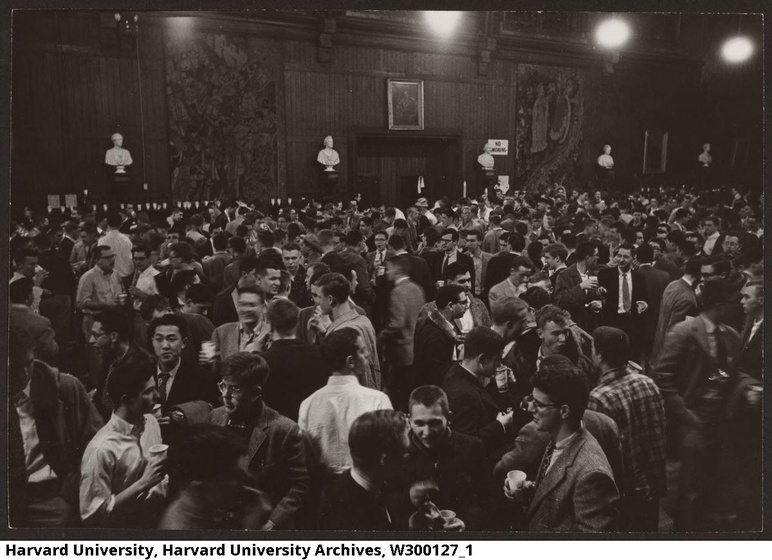 The Rise and Fall of the Freshman Smoker

Freshmen fill Sanders Theatre from wall to wall. The biting scent of cigarette smoke climbs high into the rafters, accompanied by cheer and chatter, and mixes with the musk of hundreds of drunk men. “Her Sexcellency,” Sally Rand — a famous ostrich feather burlesque dancer — performs for the crowd while a beer-drinking competition ensues in Memorial Hall. The annual Freshman Smoker is well underway.

The term “smoker” holds a few modern definitions: a person who habitually smokes tobacco; a device that smokes fish and meat; a handheld instrument used to calm beehives. But in the early 20th century, it also referred to a social gathering of men where smoking tobacco was not only permitted but encouraged. Beginning with the class of 1907, Harvard had its own: the Freshman Smoker, held late in the Spring semester. Organized by the Freshman Smoker Committee and originally held in the Harvard Union building, the Freshman Smoker originated as an event for freshmen to socialize and, of course, smoke.

With only a piano to facilitate group sing-alongs and some light refreshments for its first rendition, its origins were humble. For the next decade, the Freshman Smoker remained small-scale, supplemented by many smaller, more intimate smokers held by various dorms. As one advertisement for the Freshman Smoker for the class of 1918 claims, “These smokers are not held primarily to promote the consumption of tobacco and pretzels. The real reason they are held is to give the men of the class an opportunity to meet each other informally and to get acquainted on common ground.”

By the 1920s and ’30s, the Smoker began to grow into its own. With proper funding from the class president and treasurer, the Freshman Smoker for the class of 1921 featured silent films and music from the Smiths Hall Orchestra. Soon enough, people from every corner of Harvard were giving speeches at the annual event, from deans to football team captains, from the president of the college to sports writers. In 1937, future U.S. president John F. Kennedy ’40 was head of the Freshman Smoker Committee and master of ceremonies for the event. That year, over 1,000 freshmen arrived to watch “elaborate entertainment, which included in its cast outstanding personalities of the radio, screen and sports world,” a Crimson article reported at the time.

With the growing popularity, criticisms of the Smoker’s purpose soon emerged. The Freshman Smoker Committee had grown into the custom of outsourcing its entertainment — ad-lib comedians, dancers, and bands became a staple of the tradition. This entertainment was not cheap, and some criticized the sizable budget allocated for the single evening, arguing funds could be better spent on causes like scholarship aid.

With its expensive festivities and the advent of dozens of kegs of beer for each rendition, the Freshman Smoker had drifted from its origins as a casual get-together to promote class unity into a far more chaotic revelry. Through the ’40s and into the ’50s, the Freshman Smoker was continually marred by rowdiness and injuries.

In a particularly severe year, two freshmen in the class of 1957 were hospitalized for days following the event. One freshman living in Wigglesworth failed to get far enough away from a firecracker he made with his friends, and the home-made explosive blew up in his face. The other freshman, a Holworthy resident, engaged in a post-Smoker fight and was sent to the hospital with a head injury.

But despite these accidents, many faculty and students defended the Smoker. As John Vernon Patrick, Jr. ’52, proctor in the Yard and advisor to the committee, described, “It was too bad that the two events had to mar an otherwise perfect evening.” Despite Dean Von Stade, Jr. ’37 defending the smoker as “a healthy and happy outlet” for freshmen and subsequent attempts by the Committee to tone down its chaos, the violence spelled doom for the decades-old tradition.

In 1959, the Smoker Investigation Committee, created specifically to look into the dangers of events such as the Freshman Smoker and advise the Freshman Union Committee on how to act, recommended the immediate and complete abolition of the event. “We have the chance of a lifetime, a chance to remove the stench of the Smoker from coming classes,” Fred Sander ’59 told the Crimson at the time.

The Freshman Union Committee was unable to garner a two-thirds majority vote to abolish the tradition, so the University took over, and the class of ‘59 became the last to hold a Smoker. As Dean Von Stade described in a 1959 report: “Attempts were made, over the past few years, to initiate various measures to make the Smoker a pleasant outlet for mid-winter tensions without running the risk of loss of control of the situation. These attempts failed, and the Smoker has been abolished.”

— Magazine writer William S. Hahn can be reached at william.hahn@thecrimson.com.