Holding 2014 Close: A Message from the Senior Class Marshals 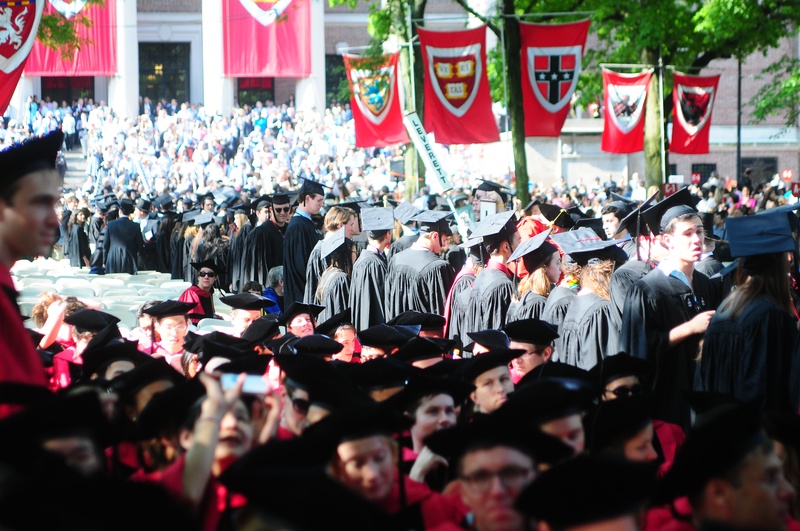 Crammed together on a boat for the Moonlight Cruise, our Class of 2014 was inescapably close to each other. With Senior Week revelries over and graduation looming near, we feel both pulled together and drawn apart—drawn closer by our last days together, yet feeling the pull of the different paths we’ll take as we scatter across the world.

When our class arrived at Harvard, we hailed from 78 countries and 49 states; we were from everywhere, it seemed, except Wyoming. We spent the first 18 years of our lives living in different states and countries, growing up apart from each other. But we were admitted to complement each other, to contradict each other, to learn from each other’s differences. When we chose to attend Harvard, we made a choice to become close. We committed to each other as much as we did to this institution, and we have grown together as the years passed. Interweaving patterns of apartness and closeness have united our class and solidified our understanding of each other and ourselves.

Though we came to Harvard from the most apart of worlds, within our first week here we learned how much closeness we would encounter. Freshman Week brought us close—in a very physical sense at times. On one of the first weekend nights of college, we wandered into the big Rush Hour 2 dance party in the SOCH to witness countless Harvard students bumping and bobbing—and then were evacuated when our closeness became too much for the glass wall. Later freshman year, as we prepared to enter Harvard’s unique House system, we divided into close blocking groups and dared to partake in an illicit River Run together. Sophomore year, we crowded the dignified Tercentenary Theatre and transformed the lawn into a giant mud pit by dancing in the rain at Harvard’s 375th Anniversary. Junior year, we huddled close in dorm rooms with our friends during Hurricane Sandy as Harvard cancelled classes for the first time in 34 years—and then cancelled classes a few more times for another act of Mother Nature and the Boston Marathon tragedy. Proudly, each year we’ve stormed the field, hopping barriers with our close friends at Harvard-Yale after each of our four consecutive victories at The Game.

Even as Harvard brought us close as a class, it brought out the best and most wonderful differences among us and showed us that apartness should be celebrated, too. Just as Dean Pfister taught us to look at the Yard and its flora with new eyes, we learned to see each other through new and different lenses. Whether shopping for new courses or presenting senior theses, we took pride in our disciplines and concentrations and our different methodologies of thought. We celebrated our heritages, cultural traditions, and backgrounds in spaces both old and new, from Annenberg to Quincy’s Stone Hall and the new Office of BGLTQ Student Life. Our summers and winters saw us crisscross both our campus and the world on exciting projects, jobs, and internships, bringing back ideas and experiences to share with our peers. For four years we have forged separate and diverse paths, even as we have coexisted in the same place.

As a class of builders, thinkers, and challengers, we constantly strove to see apart from the status quo and improve the lives and the communities around us. Against the backdrop of the Arab Spring, Ukraine conflict, and other revolutions, we called for changes closer to home. We were our own sharpest critics, turning a critical eye to issues of fair labor, responsible investment, sexual harassment, and mental health in our community, seeing members of our class rise to action as leaders. We imagined a world apart from what existed, and fought to make this vision come to fruition.

Thank you for giving us the opportunity to serve you, 2014. It has been an honor and a joy for us to facilitate moments of closeness and foster old and new friendships from the many remarkable corners of our class. We could not be prouder to represent such an outstanding, inspiring group, and we know this pride will swell as we take on the world.

As we transition into a phase of prolonged physical apartness, the closeness that we created and reveled in here need not fade. Harvard has proved that being apart—in distance and difference—can draw us close. Congratulations, 2014.

Commencement 2014 Senior Section 2014
Want to keep up with breaking news? Get the latest, straight to your inbox.

5 Favorite Peet’s Drinks & What They Say About You