Once somebody sent me a chain email that talked about the differences between football season in the North and in the South. It said that in the North women pack for a game by slipping a chapstick in their back pocket and a $20 bill in their front pocket. Down South, women attending the game need to sport a Louis Vuitton duffle with two lipsticks, powder, mascara (waterproof), concealer, and a fifth of bourbon. Wallet not necessary in the South, the article said—that’s what dates are for.

There is no reason why I should like football. It is against everything I stand for.

Once somebody sent me a chain email that talked about the differences between football season in the North and in the South. It said that in the North women pack for a game by slipping a Chapstick in their back pocket and a $20 bill in their front pocket. Down South, women attending the game need to sport a Louis Vuitton duffle with two lipsticks, powder, mascara (waterproof), concealer, and a fifth of bourbon. Wallet not necessary in the South, the article said—that’s what dates are for.

When we moved to Atlanta and businessmen made small talk by gossiping about the SEC, my dad wondered why his new peers had so much to say about the Securities and Exchange Commission. Originally from Manhattan and the Midwest, my parents claim that our family is still living out our “expat assignment in our home country,” even though we’ve been living in Georgia for more than ten years.

I guess the move to Georgia when I was 11 was when my mom decided to teach me Football 101. On some Saturdays she would grab a beer out of the fridge (I have still never seen her drink a beer on a non-game day), sizzle burger patties on the stove, and explain the rules of the game as we watched together. I learned about downs and blitzes and safeties and, yes, even pass interference. Together we developed some favorite players, and during the week we’d ping sports articles to each other through our AOL accounts (mine still under parental controls) to prepare for the next weekend’s matchups.

Even so, I should not like watching football. Women can’t participate at all professionally, or even in little leagues or high schools. For the guys who get to play it’s frequently as much about aggression as it is about strategy. It is the most concussion-inducing sport. The games are long with every timeout stuffed full of commercials about all of the beers and cars that football-loving manly men should buy to raise their machismo to the next level. College football programs require huge budgets that could be put towards classes or the university’s academic mission. Most of the professionals are ridiculously overpaid. Oh, and did I mention that the only way for women to be involved is through sexy dancing on the sidelines? That makes me fume. Yet somehow, I can’t watch enough.

This January I curled up on the couch with my mom to watch Auburn and Florida State play for the national championship. I was vaguely rooting for Auburn (because if you watch the SEC, you have to root for the SEC) but I also didn’t really care who won and I was just content to be watching, and a bit sad to be experiencing the last ever game of the Bowl Championship Series before the NCAA transitions to a new College Football Playoff system next season. Florida State scored a touchdown with only about 13 seconds left on the clock to win the game. Jameis Winston, FSU’s quarterback, threw the ball to his sprinting teammate Kelvin Benjamin who jumped high into the air to catch it in the end-zone. When Benjamin caught the ball, his entire body was head and shoulders above the Auburn defenders guarding him. It was a great play.

Back when I was in elementary school and summers were for spending every day swimming at the community pool (and eating Airheads candy), my siblings and I would occasionally go to “the deep end” and play a game on the diving boards. It was a two-person catching game: one person jumps off of the diving board and the other stands on the side of the pool and throws a Splash Bomb pool toy towards the jumper. The game is trickier than it sounds—frequently the pool toy and the jumper never connect: The splash bomb whizzes by before the jumper has left the diving board, or the jumper is underwater and the ball is still in the thrower’s hand, or somewhere in between such that the jumper and the ball just plain miss each other instead of meeting perfectly in the middle for an epic catch. We would play for hours, but only once in every dozen or so tries was the jumper able to grab the suspended Splash Bomb out of the air before going under.

Now imagine that same throwing game at the diving boards. Except you are on a football field and throwing the ball to one of 10 other people, and there are 11 people trying their absolute hardest to prevent you from throwing the ball at all. And each of the 11 defenders weighs between 200 and 400 pounds and they are tall and angry. They want to knock you over; their goal is to smush you, or pummel you into the ground, or at the very least knock that ball out of your hand and take it for themselves. And this is not a clear blue pool—you’re instead on a field that is dirty and muddy and has a little dip every now and then, and maybe it’s snowing or hailing. And your hand is sweating and the ball is a spheroid that could oh-so-easily slip right out of your grasp. And you have to locate your teammate a few yards downfield and throw the ball perfectly so that he can jump and catch it perfectly with nobody getting hurt. It seems like a nearly impossible task.

Professional players will complete that throw; they’ll catch that pass. Maybe I just like football because the fact that the whole sport can exist at all, that a play ever happens, is a bloody freaking miracle. 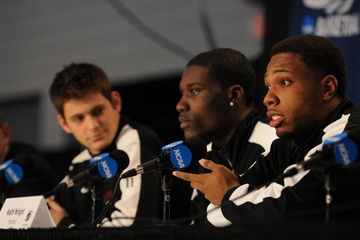 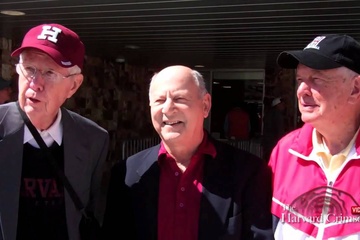 By Scott A. Sherman
Men's Basketball

The Odds Are Against Harvard Men's Basketball

By Daniel A. Grafstein 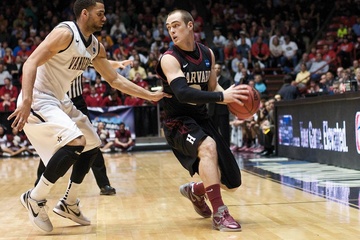 By Catherine E. Coppinger
On Campus 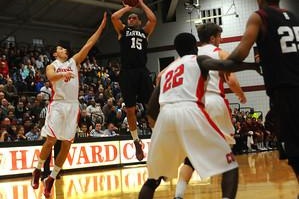 Does Harvard have a shot? Florida