In the wake of a generally unsupported Occupy Harvard campaign, a new style of student activism has emerged that looks to work within the existing system 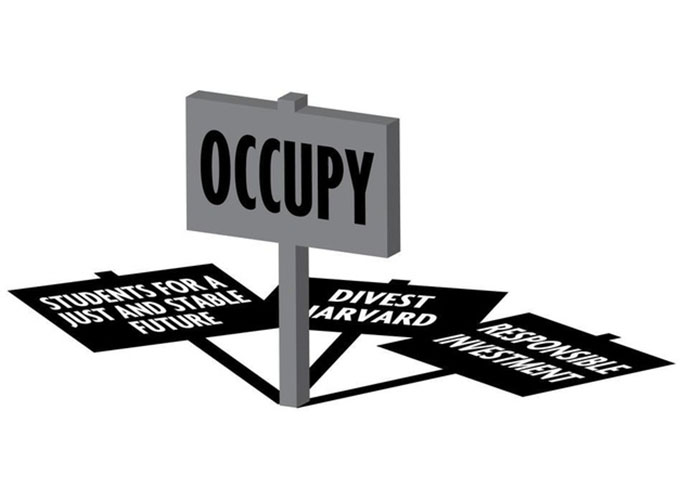 In the shadow of Occupy Harvard, new strategies of student activism have emerged that are at once informed by Occupy and reactions to the past movement's shortcomings.

When asked to rate their support for Occupy Harvard on a scale from 0 to 10, Harvard undergraduates, on average, gave the movement a rating of 2.84. The survey, conducted by students as part of a final project for Statistics 104 in December 2011, was telling—Occupy Harvard did not have the support of the community it claimed to represent.

By the time Occupy Harvard fizzled out in spring 2012, many students and administrators—tired of locked gates, nebulous objectives, and tents in Harvard Yard—were relieved.

But from the ashes of Occupy Harvard arose a new kind of activism. This academic year, conversations in tents have been moved to administrators’ offices, occupying has morphed into voting, and community frustration has evolved into support.

Using these new methods, undergraduate activists have primarily rallied around three issues pertaining to University policy. The Harvard chapter of Students for a Just and Stable Future has worked to convince Harvard to divest its endowment from fossil fuel companies through its Divest Harvard campaign, the Radcliffe Union of Students partnered with the International Women’s Rights Collective to launch the Our Harvard Can Do Better campaign to reform the University’s sexual assault policy, and the Responsible Investment at Harvard Coalition emerged to champion a social choice fund to support socially conscious University investments.

These new activists, many of whom participated in Occupy Harvard in fall 2011, say they have a complicated relationship with the old movement. They have simultaneously exploited the consciousness and connections that emerged on campus as a result of Occupy Harvard while trying to improve on the shortcomings of last year’s activism. In doing so, they have gained what Occupy Harvard never could—the support of students and administrators.

Many activists say that Occupy Harvard laid a foundation for new campus movements by raising the profile of social and environmental justice issues and bringing activists into proximity so that they could work together.

Jennifer A. Sheehy-Skeffington, a graduate student in psychology who participated in Occupy Harvard, said she believes the movement helped raise awareness regarding social and economic inequality on campus.

“Occupy played a really big role in terms of changing people’s consciousness, both at the national level and at the Harvard level,” Sheehy-Skeffington said.

In fall 2011, Occupy Harvard participant Samuel F. Wohns ’14 and many fellow activists he met through Occupy Harvard co-founded the Responsible Investment at Harvard Coalition, a group that he said sprung out of the activist climate.

“As Occupy Harvard was winding down or losing momentum, it seemed like an opportune time to bring together these actors,” said Wohns, adding that many Occupy activists shared aspirations of pushing for change in the way Harvard invests its endowment.

“There was some consciousness on campus, largely thanks to Occupy Harvard,” Wohns, an inactive Crimson magazine editor, continued. “But there wasn’t yet a strategic plan, and we thought maybe we could fill that gap and be an organization that could develop its strategy to take advantage of this consciousness.”

Alli J. Welton ’15, a board member for the Harvard chapter of Students for a Just and Stable Future, helped found SJSF’s Divest Harvard campaign in September 2012. As with Responsible Investment, many of the members of SJSF were once involved in Occupy Harvard.

Welton said that movements like Divest Harvard and the social choice fund were able to form because of the face-to-face connections facilitated by Occupy Harvard.

“It was a really great space in terms of people coming together to meet people and grow the movement,” Welton said of the Occupy Harvard encampment.