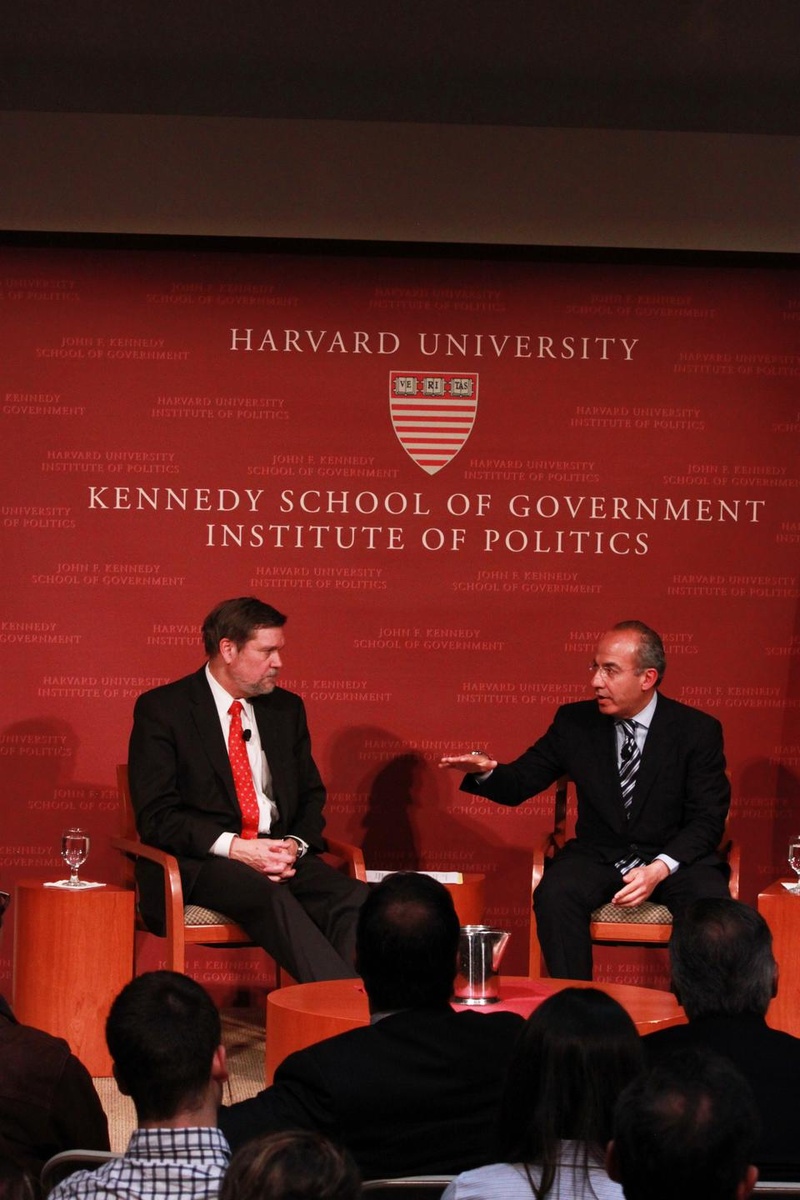 Felipe Calderon (right), the 56th President of Mexico (2006-2012) and the Inaugural Angelopoulos Global Public Leaders Fellow at the Harvard Kennedy School, speaks at the JFK Forum with David T. Ellwood (left), the Dean of Harvard Kennedy School. Calderon discussed a variety of issues, including Mexican economic interests, the level of violence in Mexico, and Mexico's role in Latin America.

In a conversation that steered clear of much of the controversy surrounding his arrival at the Harvard Kennedy School, former President of Mexico Felipe Calderon reflected on his term in office.

Calderón, who after leaving office in December began his year-long tenure as a fellow at the John F. Kennedy School of Government, came to Cambridge amid fierce criticism of his efforts to combat drug cartels in Mexico.

Thursday’s discussion at the JFK Jr. Forum, however, shied away from much of the contention and instead focused on Calderón’s successes in reacting to both the 2008 financial crisis and the 2009 swine flu pandemic.

Ellwood began the Forum by asking attendees to refrain from disrupting the proceeding of the conversation. Prior to the event, increased security surrounded the Kennedy School, and guests were not permitted to enter with water bottles or backpacks.

“The level of security provided for tonight’s event is consistent with that provided for Forum events featuring a head of state,” wrote Esten Perez, the Institute of Politics’ director of communications, in an email.

The event passed without interruption, and when the floor was opened for audience questions, no speaker inquired about the so-called “war on drugs” that Calderón launched during his presidency.

The only mention of this term was in a question Ellwood asked Calderón. Although Calderón did send troops to fight drug violence in Mexico, he criticized the terminology others have applied to his efforts.

“‘War on Drugs’ is an expression coined by President Nixon in the ’70s here in the States. And I didn’t declare a war on drugs,” Calderón said.

Throughout his term, Calderón took a variety of other measures to quell drug crime, including decriminalizing personal possession of drugs.

His administration also adopted a three-pronged anti-drug strategy, he said.

The first tactic was to “[face] criminals with the full force of the state,” Calderón said. Then, the administration utilized the Mexican Armed Forces to combat drug-related crime, alongside the federal police force. Last, Calderón said that he sought to revitalize Mexico’s “social fabric” by providing new opportunities for the Mexican youth, including the elimination of tuition at some public universities and high schools.

These reforms were combined with steps toward universal health care and a demonstrated commitment to reducing Mexico’s budget deficit.