“Will I be safer?” Birtukan Midekssa echoes. She lets out a laugh, pauses, then shakes her head, but her wide smile doesn’t flicker. “I don’t know,” she says. “Honestly.”

“Will I be safer?” Birtukan Midekssa echoes. She lets out a laugh, pauses, then shakes her head, but her wide smile doesn’t flicker. “I don’t know,” she says. “Honestly.”

Midekssa, nearing 40, comfortably recalls her experience as a fellow in Harvard’s Scholars at Risk program from the courtyard of Harvard Kennedy School, where she is now a student in the Mason Mid-Career Program for leaders from developing countries. Midekssa is one of many scholars who have sought protection through Harvard’s branch of the SAR network, an international community of academic institutions defending academic freedom and human rights worldwide.

Midekssa, who worked as a federal judge for the criminal court and then as a politician in Ethiopia, arrived in the U.S. after finding a shrinking space for political involvement in her home country. She had been imprisoned twice after she and other leaders of her party, Unity for Democracy and Justice, were accused of treason, among other charges. Both accusations sentenced her to life in jail; she was released after 21 months during the first sentence due to international pressure; during her second, she was held in solitary confinement for 18 months.

I ask her if she would be safer the next time she returned to Ethiopia after participating in Harvard’s Scholars at Risk program.

“[The program] is really helpful in terms of personality development and enriching my understanding and knowledge,” Midekssa answers, then stops. “But in terms of security, I’m not sure.”

The Scholars at Risk Network, a program that was started in the Human Rights Center at University of Chicago in 1999 and relocated to New York University in 2003, markets its mission as an extension of the international support offered to European scholars facing persecution in the ’30s and ’40s. Harvard opened its own chapter in 2002, under the initiative of Jacqueline Bhabha, Professor of the Practice of Health and Human Rights at the Harvard School of Public Health and a past chair of the program while she was working at the University of Chicago, and Stephen J. Greenblatt, John Cogan University Professor of the Humanities. Bhabha believes that the network’s mission of protecting scholars and artists still resonates even 80 years later: “Today in our period scholars face risks that are no less grave,” she explains.

Harvard sponsors three to four scholars every year; they are selected based on nominations and the level of personal risk faced in the home country. Past scholars have included Iranian novelist Shahriar Mandanipour and Cambodian poet Tararith Kho, as well as filmmakers, historians, activists, and artists from across the globe.

Those involved say that Harvard’s Scholars at Risk program is among the biggest and best in the country; Bhabha points to its network of affiliates from different corners of the university as the primary factor. The program, however, still suffers from limited funds: It is supported in small portions by the University, grants from different departments, scholarships, and individual sponsors.

“It will always require a tremendous amount of volunteer work,” Greenblatt says, noting the difficulty the Committee faces while deciding who they can support. “We could always go further than we do.”

Once on campus, scholars can interact with the Harvard community as they wish. Some, like Midekssa, choose to speak up about their presence on campus as Scholars at Risk and participate in public events, even inviting students over for dinner; others keep mum for their safety. The scholars are supported by all of Harvard’s resources and the immediate Scholars at Risk community, providing more than academic assistance.

“It’s not only about saving someone’s life, but someone’s spirit,” Greenblatt says. “That means integrating someone as best as you can into the community,” providing medical, legal, and familial assistance.

While Midekssa and others involved in the program at Harvard stress the unparalleled academic resources offered on campus, all speak more emphatically about the strong Scholars at Risk community that continues to grow and expand every year. Scholars abroad, especially those in exile, often feel detached from the community, Midekssa says: “The academic pursuit has a lot of meaning—it’s a very valuable goal—but if it were not glossed with that type of family networking [that SAR provides], it could have been incomplete: that spirit, the commitment, and the solidarity.”

One source of this community’s vitality and growth are the contributions of students from across the University who have become involved in growing numbers. Student interest in Scholars at Risk is often sparked in Jane Unrue’s “The Voice of Authority,” a freshman Expository Writing class. Unrue, a dedicated member of the Scholars at Risk committee, facilitates discussions in class about human rights and organizes interaction with some of the scholars.

After taking the class as freshmen, two students, Nadia L. Farjood ’13 and Nicholas E. Jofre ’13, joined the SAR Faculty Committee as undergarduate co-chairs. With Ivet A. Bell ’13, another classmate, they then formed a student group called Harvard College Students for Scholars at Risk, aiming to increase undergraduate interest in the program and other human rights initiatives across campus. They and other students in the class helped organize the first “Living Magazine,” a performance and reading event in which the scholars, aided by students who also read and translated their work, shared their ordinarily censored work with the Harvard community.

Edwin L. Whitman ’15 is a current member of HCSSAR who also took Unrue’s class his freshman year. “The hardest challenge for [HCSSAR] is to create a genuine understanding of what risk means for scholars, and what risk means for scholarship,” he says, speaking of the group’s future direction. “In our day-to-day lives on campus, we’re not really presented with… understanding what it means to have a protected voice, or the safety that comes with crafting our voice.”

HCSSAR is currently working on an online publication similar to “The Living Magazine.” Members of the student group hope they will serve as tangible testament to the importance of academic freedom worldwide, inspiring students to join the conversation about free press and human rights as Unrue’s class has.

Now graduated, Farjood speaks of one of her most memorable experiences during her involvement, a holiday party: There were scholars from Albania, Cambodia, Iran, Eritrea, she remembers—“even some people who couldn’t understand each other” at the home of a physics professor in Cambridge. “It looked like a UN assembly meeting, and it just felt like a family.”

As highly praised as Harvard’s SAR chapter is, Midekssa’s response to the original question—Will you feel safer when you return to Ethiopia, after having participated in SAR?—is indicative of its limits. SAR grapples with how to show public support for the scholars’ work while maintaining their privacy, and how to maintain its successes despite an ever-tight budget.

And although allies in the Harvard community do their best to find future opportunities for scholars approaching the end of their year in the program, positions within the University are not guaranteed.

“When we began, I naively thought that the presence of Harvard would make it safer for that person to return to the country,” Greenblatt says, “that even a persecuting regime doesn’t want to look that bad.” For Midekssa, as for others, this is not always the case. The Scholars at Risk program establishes many supportive relationships, she says, “but at the same time that makes you a target.“

So the future for Midekssa and scholars like her remains unclear.

“I will be staying here a bit, spending some time here,” she trails off, staring at some point just past eye contact. One day, she knows, she’ll return to Ethiopia with the SAR network still in reach. 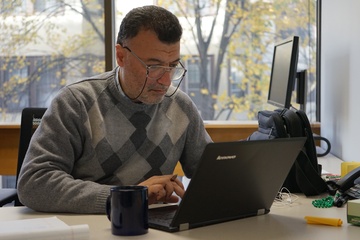 A Safe Haven for Scholars at Risk