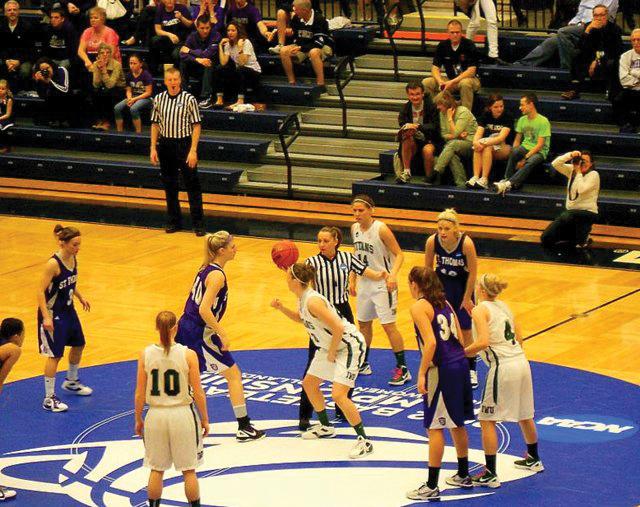 When people ask Edward C. Meier what it takes to be a referee in his conference, he gives them a parable. Meier is the Ivy League’s coordinator of women’s basketball officials, and it is his judgement that will make or break an official’s career.

“Imagine you’re in a crowded gym,” he said. “It’s so raucous, so loud, that when you blow your whistle you can barely hear it. You’re in that game and there’s three seconds left in the game, and a foul is called. The crowd roars. To your left is a coach who is irate and gesturing. To your right is a coach who is irate and gesturing. Well, one of the officials, seeing this immediately bends down and ties their shoes. Another official says, ‘let me go dry off the basketball.’ The person who goes over to the coaches, with their chin up, shoulders back, is the Ivy League official.”

These officials are an invisible part of the game—seeing plays but not disrupting them, anticipating and defusing conflicts between players and coaches.

For female officials in the Ivy League, the context of their job is even more complicated, as many juggle multiple roles. During the game they are the black-and-white shirt who made a controversial call late in the fourth quarter, but afterward they are mothers who rush home to tuck their kids in at night and are office employees who arrive at work at 9 a.m. after a night of exhilarating play.

Also, since there are no female officials in men’s Ivy League basketball, female referees bring a gender aspect to the women’s game. In this sense, officiating is a way to strengthen the lineage of the comparatively young sport of women’s basketball—the full-court game was not adopted until 1971, and the first woman was inducted into the Naismith Memorial Basketball Hall of Fame in 1985.

While officiating has a lot of positive attributes, few people spend their childhood dreaming of being a referee.

In the case of Geraldine Smith, who referees in the Ivy League, several other Division I conferences, and the NBA Development League, she fell into it upon the suggestion of a veteran official.

“I was playing golf one day, and somebody I was playing with was an official,” Smith said. “He said I looked like I used to play basketball and asked me if I had ever thought about refereeing. I then got hooked.”

The roots of this devotion are deep in student athletics. Smith, for example, averaged 18 points a game at Seton Hall and is a member of the University’s Hall of Fame. Maggie Tieman, another female official, was recruited to the University of Vermont for basketball, ended up playing softball, and now works as a health and wellness teacher and coach at Lewis Mills High School.

Yet, in order to go from player to becoming an official, and not to being a coach or merely a basketball parent, one has to have something extra, a certain love for exacting certitude and order from difficult situations.

“I’m a really black-and-white person to begin with, no pun intended,” Tieman said. “Officiating really gels with that. Either a foul or it’s not. Either it’s out of bounds or in bounds.”

Meanwhile, developing the skill and endurance of a top official requires an extraordinary amount of behind-the-scenes effort. All referees in college basketball have one-year contracts, and they work under constant awareness of the annual review.

The NCAA pushes this feedback loop even harder. After each game, the league sends referees a DVD of their performance. They are expected to watch it and break down their calls and positions. Why was a wrong call made? How could a situation have been defused more quickly? Additionally, officials must attend an annual rules clinic where they must pass a test on their knowledge of standard basketball guidelines. Throughout the year they also take quizzes based on plays that happened that season.

Most importantly, they attend summer camps where they are watched and evaluated by veteran officials from different Division I conferences. Just as an invitation to a major camp is a way for promising basketball players to be seen by influential coaches and scouts, these summer camps are also strategic opportunities for promising referees.