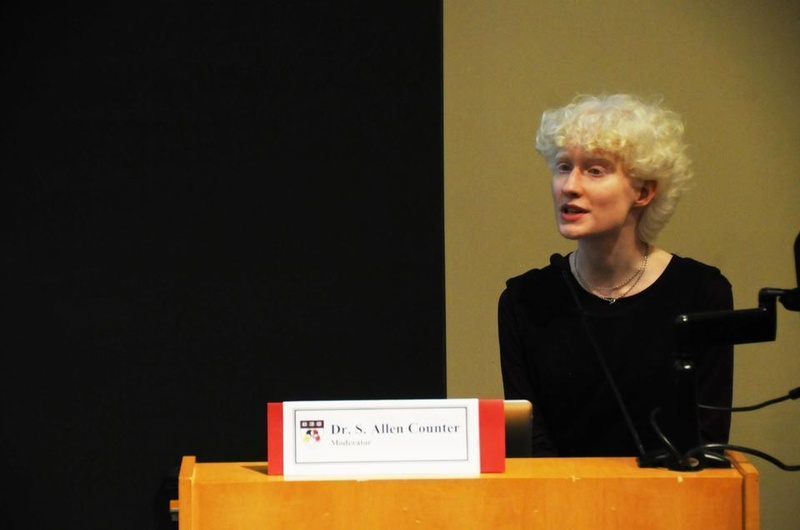 Marina M.A. Connelly '12 shares her experiences living with albinism in Australia and in the United States during a panel discussion sponsored by the Harvard Foundation that focused on the violence against people with albinism worldwide.

Individuals with albinism in the United States may face discrimination and marginalization. But that experience hardly compares with the position of albinos in Tanzania, where individuals with the condition are routinely murdered for their bones, which are used in potions, according to accounts presented at a panel discussion last night.

Sponsored by the Harvard Foundation, the panel, titled “Prejudice and Violence Against People with Albinism,” included several individuals working to advance the cause of individuals with albinism.

“For witch doctors, people with albinism are commodities, things they can trade—not human beings” said Vicky Ntetema, a Tanzanian by birth and former BBC reporter.

After they are killed, albinos’ bones are often used for potions that witchdoctors say can make Tanzanians rich and successful.

At a conference for people with albinism in Tanzania, Ntetema said that an individual with albinism told the audience that, “We want scientists that can confirm these findings of witch doctors that albino body parts can make you rich”.

“That day I said to myself that I don’t know my country,” Ntetema said, adding that albinism has become so stigmatized that albinos would be willing to sacrifice themselves if sufficient scientific evidence justified their deaths.

This experience, she said, led her to become an undercover reporter to expose the practices of witch doctors in Tanzania.

Albino children in Tanzania have not been immune to the violence directed against their kin and many of them have taken shelter in a governmental school.

“The children would not laugh. They would not smile,” said Peter Ash, the founder of Under the Same Sun, which works to advance albino rights. “They were all living in a state of trauma.”

“Differences are something that we can choose to deny or choose to honor,” she said. Educating individuals about these conditions such as albinism, she added, is a “community effort.”

The panel also included Rick Guidotti, a documentarian, photographer, and co-founder of “Positive Exposure,” an organization that uses visual arts to embrace people with genetic differences.

Formerly a fashion photographer in New York City, Guidotti explained that he was “always forced to work within the beauty standard” but has recently worked with albino men, women, and children.

He has also traveled with organizations such as “Under the Same Sun” to hear the stories of Africans with albinism and to change perceptions of albinism through photography. Guidotti’s exhibit of people with albinism is on display in the lobby of the Science Center today.

—Staff writer Julia R. Jeffries can be reached at juliajeffries@college.harvard.edu.