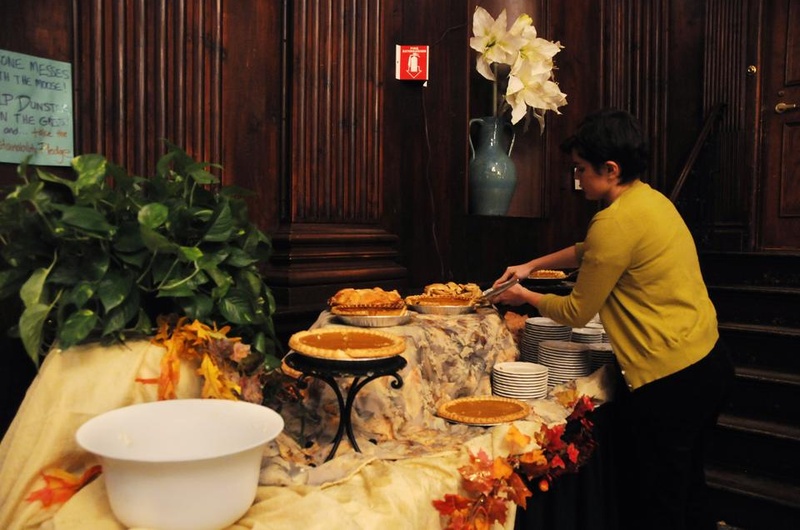 Students enjoy the pumpkin and apple pies at the Thanksgiving dinner in Dunster House.

Smiling faces, a steaming meal, and containers of Play-Doh greeted students who remained on campus over the Thanksgiving holiday at a celebration of the season in Eliot Dining Hall last Thursday evening.

Eliot House Resident Tutor Carl L. Miller said he had initially planned to welcome his parents and relatives to Harvard with a home-cooked meal, but then decided to open the event to any and all comers after he and his wife, fellow Eliot tutor Valencia Miller, “thought back to [their] undergraduate experiences and the times [they] could not go home.”

During those on-campus holidays, Miller said, it “felt good...to be with a quasi-family.”

After eating a delicious meal of turkey, stuffing, and macaroni and cheese, each person in attendance shared a Play-Doh creation—a model of the thing for which they were most thankful—in a large-scale rendition of a Miller family tradition.

A miniature blue elephant with well-defined tusks—sculpted to look like the Eliot House mascot—and a harlequin spider with a yellow body and red legs that terminated in blue shoes were among the favorites.

Students in attendance attested that the Eliot House event—aided by Grandma Miller’s secret recipe for sweet potato pie—provided a satisfactory alternative to celebrating the holiday at home.

“We had a great time,” Miller said after the festivities ended. “I’m just glad that the students enjoyed it.”

In another corner of the campus, Arturo Cuevas ’12 of Leverett House observed Thanksgiving in a different way.

“Thanksgiving Day, I cleaned my room which I haven’t done in a long time,” Cuevas reluctantly admitted.

Aside from isolating himself in his dorm to clean, Cuevas was also able to find a locale where he could partake of some Thanksgiving victuals. For members of RAZA—Harvard’s Mexican-American student organization—a local Harvard and RAZA alum provided a veritable cornucopia of foods at his apartment.

“He invited a lot of us to cook with him,” Cuevas explained. “The dinner we had was pretty good actually.”

Cuevas summed up his opinion of the Thanksgiving experience at Harvard by saying that it was “a good way for people to relax.”

For students who were not affiliated with any organized functions or clubs that met during the recess, a Thanksgiving meal was offered for six straight hours at Dunster House, beginning at noon. Centerpieces included cider-glazed ham, roast turkey breast, and after-dinner mints.

“If you’re staying here,” Cuevas said, “you might want to try to make the most of it.”