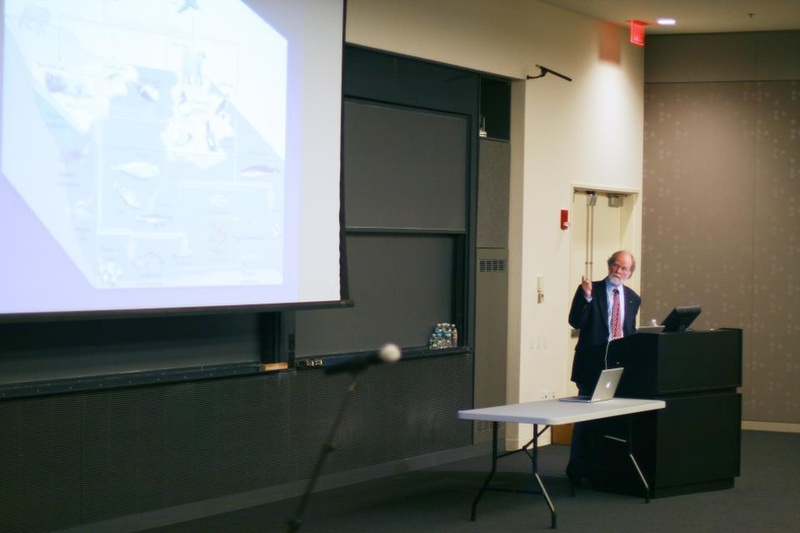 James J. McCarthy, Ph.D., the Alexander Agassiz Professor of Biological Oceanography, discusses the thinning of arctic ice and its potential consequences on the arctic ecosystem.

Though he cracked jokes and pointed enthusiastically at vibrant red, spiking temperature graphs, Richard B. Alley, a professor of geosciences at Pennsylvania State University, ended his presentation at yesterday’s Harvard climate change symposium with a grave warning.

“If you care about people,” he said, then you should be concerned about climate change.

In coordination with a meeting of the U.S. Arctic Research Commission, the Harvard University Center for the Environment held a symposium called “Climate Change: A Perspective from the Arctic” at the Northwest Science Building yesterday.

So many students and professors packed the lecture hall that some were forced to stand in the back.

McCarthy began with an overview of the current climatic changes occurring in the Arctic, Huybers followed with a summary of Arctic climate variations during the past three decades, and Anderson closed the symposium with an exploration of Greenland’s future role in climate change.

These professors from the Department of Earth and Planetary Sciences are “rockstars,” according to Environmental Action Committee Events Chair Tim L.H. Treuer ’10.

“The effects of climate change in the Arctic may be a key part of understanding the puzzle of how climate change will affect the planet as a whole in the future,” she said, echoing many of the speakers.

Schrag said that he thought that the event was a huge success. He said the symposium is “one of the great things Harvard does” to promote interest in environmental issues.

According to Schrag, the Center for the Environment encourages the study of climatology with multiple programs throughout the year.

It “catalyzes and encourages [professors’] research” through fellowships and grants, he said, while simultaneously stimulating public interest through events such as the symposium.