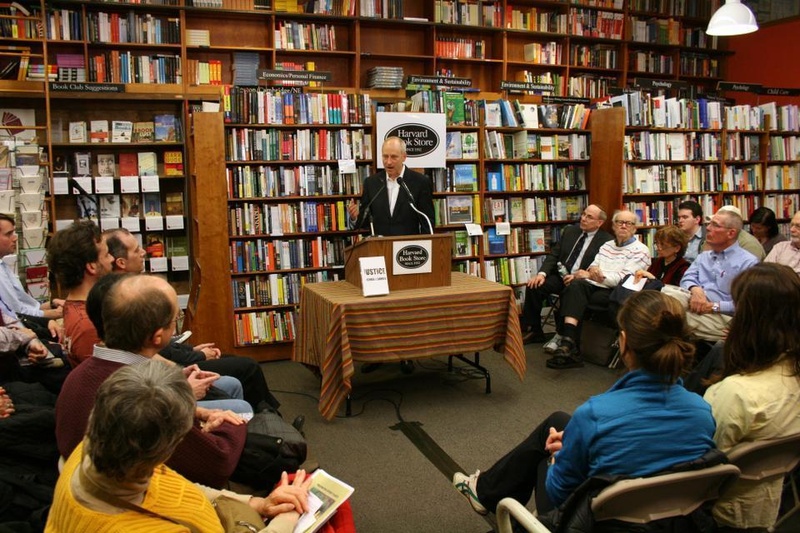 Professor Michael J. Sandel speaks about his new book, “Justice: What Is the Right Thing To Do?” at the Harvard Bookstore yesterday.

Sandel, whose new book is titled

“Justice: What’s the Right Thing to Do?,” argued that ancient philosophers are still participants in the arguments that preoccupy contemporary society.

“The idea of the book is to persuade readers, participants, and students that the convictions and opinions that we have, that we care about, rest on some of the big ideas about justice and the common good that philosophers have explored,” Sandel said.

“It’s an invitation to moral and political philosophy, and a richer public discourse to one we’ve been accustomed,” he added.

Sandel said that the tenets of many philosophers are rumbling underneath contemporary issues. He told the audience that although Aristotle’s ideas of justice seem unfamiliar because they require an assessment of what is just, their applications are recognizable in the questions that society struggles with.

“What was this discussion really about? It seemed to be a dispute about fairness,” said Sandel. “But if fairness was the only thing at stake, why were the easy solutions so objectionable? Could it be that, really, what was at stake was whether or not the institutions are worthy of recognition and honor?”

Sandel continued his discussion within a contemporary framework by prescribing certain conditions for improving the execution of justice and ethical action.

“I think one of the reasons that our discourse is so impoverished is that we rarely articulate the moral principles and the moral ideals underlying our positions,” he said.

“Even more rarely do we listen attentively and engage with the moral convictions of those with whom we disagree,” Sandel added.

Many audience members, including Bernie Steinberg, the president and director of Harvard Hillel, acknowledged the wide implications that Sandel’s book will have.

“This addresses a whole range of issues that are pressing, and Michael entices us to look into ourselves and to look into who we are by understanding the foundations of our thinking,” Steinberg said.

MIT May Add 300 To Undergrad Class