A Flash Dance in the Yard

Last Thursday, at approximately 12:58 P.M., students could be seen casually kicking back in the citrus-colored common spaces chairs on ...

Last Thursday, at approximately 12:58 P.M., students could be seen casually kicking back in the citrus-colored common spaces chairs on the green in front of the John Harvard statue. At 1:03, to the shock of the tourists amongst them and unsuspecting students rushing to class, the sound of dance music shook the yard. For the next 15 minutes, the yard was awhirl with color and flailing limbs as students broke it down and then walked away like nothing had happened.

Bystander Linda H. Chao ’10 could only call it a “hilarious dance fest,” but even many of the participants were unaware that the A.R.T. organized the “flash mob” as part of a new theatrical initiative. A.R.T. Artistic Fellow Allegra E. Libonati describes the event as “community outreach based on spontaneous moments of theatrical joy. It’s bending the definition of theater.”

The A.R.T. rallied participants through vague instructions in an email circulated around campus. According to student facilitator Ilan J. Caplan ’09, “People can create these spontaneous joyful moments just about anywhere.”

The event was joyful but also fiercely competitive. When the music stopped, students piled onto chairs in a struggle of survival of the fittest.

Elizabeth B. Graber ’11, an enthusiastic dancer who made it to the later rounds of play, had a clear strategy for success. “When in doubt, swing dance. If that doesn’t work, shimmy, shimmy, shimmy.”

According to Webster, members of a flash mob “assemble in a public place, do something bizarre, and disperse.” Harvard is now part of a vibrant flash mob tradition, which includes the 4,000-person Silent Disco on the London underground in 2006, and the 5,000-person pillow fight in New York City in 2008.

Missed out on musical chairs? Student instigator Eve H. Bryggman ’10 hints that there may be more spontaneous theatrical joy to come. “If you didn’t make it, don’t worry. All I can say is: don’t get your hopes…down.” 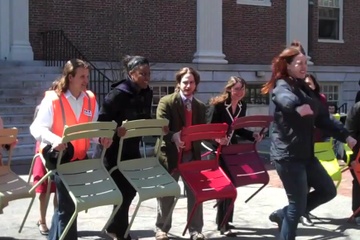 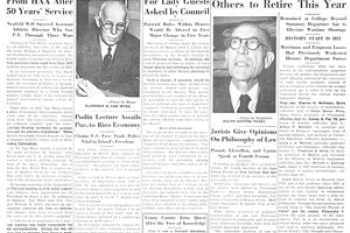 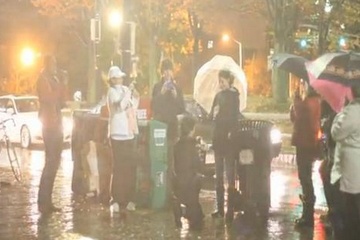 By Aria N. Bendix
For The Moment

You'll Always Have a Story