Faculty Hiring Stable Across Most Schools 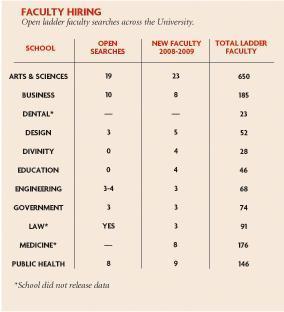 After a period of strategic growth, two of Harvard’s smallest graduate schools are not planning to conduct faculty searches this academic year.

The Harvard Graduate School of Education and Harvard Divinity School—both of which undertook ambitious efforts to strengthen their faculties over the last four and seven years respectively—are not looking for new hires this year, school officials said.

While Harvard’s financial situation has constrained hiring, Senior Vice Provost for Faculty Development and Diversity Judith D. Singer emphasized that the process of bringing in new scholars or promoting junior faculty across the University will continue—just at a slower pace than in years past.

“The outside media would lead you to think that we are not hiring,” Singer said. “That’s not the case. We’re dong fewer searches this year, but we are doing searches.”

Just last month in her welcoming remarks, University President Drew G. Faust reaffirmed the University’s commitment to research and teaching but cautioned that Harvard will need to “look hard” at hiring practices and reevaluate the importance of filling each vacancy.

“The deans are going to say, ‘When someone leaves, is this a role and field that we want to cover? Is our department the right size? Is this an appointment that should be replaced right now, relative to other near term investments we might make?’” Faust said in a September interview.

But in the last three years, Harvard has seen a marked decline in the rate of faculty appointments.

The University has filled roughly 90 ladder faculty positions annually and an average of 75 faculty members have left the University each year for the last five years.

But this year, only 70 new professors will be joining the University.

Of Harvard’s nine other graduate schools, seven reported to The Crimson that they will conduct roughly the same number of open searches as last year—”business as usual,” a spokesperson said.

The Law School and the Medical School were unable to provide information on the number of open searches planned for this academic year.

The School of Engineering and Applied Sciences, on the other hand, laid out specific plans last year to bolster its faculty—an initiative that will be implemented under the newly appointed dean Cherry A. Murray.

Murray estimates that the school will need to hire at least 50 additional faculty members over the next decade in order to meet its academic and research goals.

Though the numbers show relatively unchanged hiring patterns, Singer acknowledged that the data may not fully reflect the impact of the $11 billion drop in Harvard’s endowment for the fiscal year ending on June 30, 2009.

Searches for senior faculty appointments often take several years to complete, Singer explained, and some appointments do not arrive on campus immediately after accepting Harvard’s offer.

—Staff writer Athena Y. Jiang can be reached at ajiang@fas.harvard.edu.

—Staff writer June Q. Wu can be reached at junewu@fas.harvard.edu.