At Harvard IOP Forum, Gov. Larry Hogan Lays Out a Moderate’s Path to the Presidency

Mike on a Bike: Dunster Resident Dean Michael Uy Bikes from California to Harvard in 42 Days 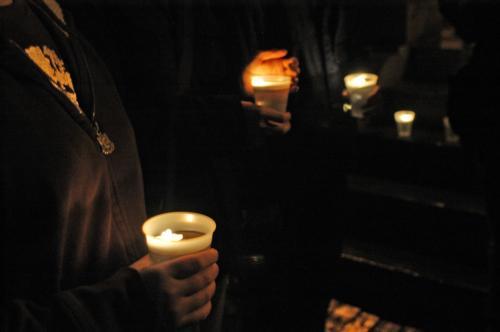 The Harvard BGLTSA held a candlelight vigil to observe their annual Transgender Day of Rememberance outside Matthews Hall yesterday evening. Those in attendance shared their thoughts and stories on the issue.

Harvard Yard was quiet last night, but a tight circle of people outside Matthews Hall observed a moment of more profound silence.

Five students and one University employee gathered to commemorate the ninth annual Transgender Day of Remembrance, which memorializes people who have died from anti-transgender violence in the past year. The event was hosted by Harvard’s Bisexual, Gay, Lesbian, Transgender, and Supporters Alliance.

According to Michelle C. Kellaway ’10, community co-chair of BGLTSA, the term “transgender” refers to transsexuals, cross-dressers, and anyone who is gender-variant or perceived to be gender-variant.

“To put it succinctly, when someone’s biological gender is not concurrent with their gender expression,” Kellaway said.

Fellow Community Co-Chair Gilda D. Medina ’09 said she could not provide an estimate of how many Harvard students identify as transgender. She noted that the term encompasses many different identities and is by its nature very personal.

“It tends to be older students that either make that leap to identify or figure out their identity,” Medina said.

But there was nothing ambiguous about the deaths of people who were remembered last night. The assembly, their breath rising into the cold night as clouds of steam, read aloud the names of 11 people who have died since January, some of whom had been shot, stabbed, strangled, or struck repeatedly by a car. Two died after they were denied medication for AIDS.

The deaths occurred in places as diverse as Thailand, Chile, and Philadelphia.

Vigil participants warmed their hands by holding plastic cups of water containing vanilla-scented candles, one for each victim.

Medina emphasized that the Day of Remembrance only mentions deaths that have been reported and only those victims who were killed. She said that many others had suffered emotionally and physically because of their transgender identity.

The Transgender Day of Remembrance was first held in San Francisco in 1999. The event was organized in reaction to the death of Rita Hester, a transgender woman from Boston who was killed in 1998.

The Boston observance of Transgender Day of Remembrance was held on Sunday night.

“I feel like this is not a widely broadcast issue,” said Marco Chan ’11, BGLTSA’s social chair.

Although there is little awareness at Harvard of transgender issues, students are generally receptive once they are informed, Medina said. “The point is to bring the personal to the public,” she said.

On Campus Gender and Sexuality