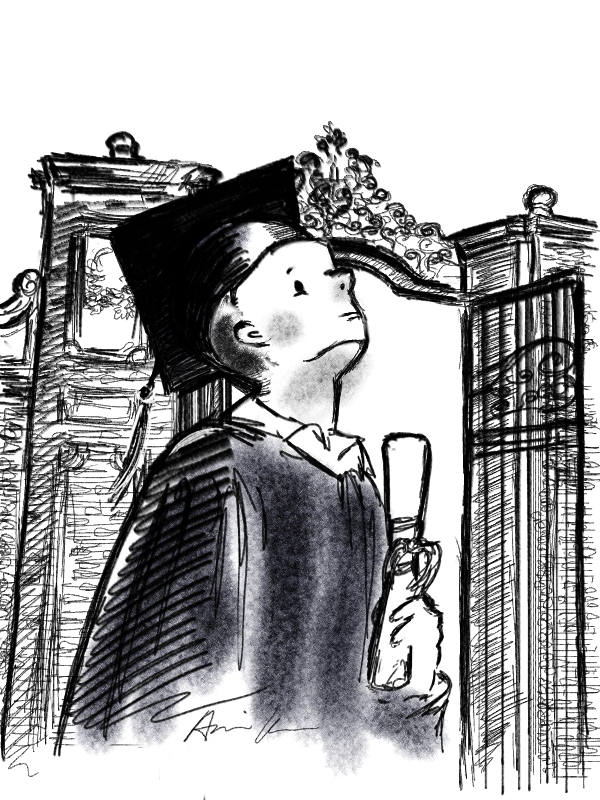 Wearing a warm periwinkle sweater, Meg Brooks Swift ’93 discusses the many responsibilities of her job. She manages Harvard’s federal work-study funding and the Student Employment Office, oversees Harvard College Research Program grants, and reads applications for the Admissions Office. The job is intense but flexible—she can leave in the middle of the day to catch a school assembly or PTA meeting if she wants .Her office walls pop with paper plates caked in crayon and lop-sided construction paper masks made by her kids.

Swift wasn’t thinking about job flexibility when, as a senior in college, she sat in OCS listening to a Teach for America presentation (when the organization was small and unheard of, Swift insists). After graduation, Swift moved to New Jersey as a TFA corps member, arriving just weeks before two cities had to cut their TFA programs. Already trained for the classroom, Swift worked as a substitute teacher for a bit but dropped out before Thanksgiving. She didn’t know what she was expecting of her first work experience, but it had been a failure.

Soon afterwards, Swift found herself at the Harvard-Yale game reconnecting with classmates. It was hard not to compare herself to peers raving about the impressive projects they were tackling at work.

Swift worked as a secretary while she looked for jobs that seemed right. One day she got a call from her friend about a position at PricewaterhouseCoopers that involved researching issues of homelessness. The role sounded like a good match for Swift, who had worked at the Homeless Shelter and had written her thesis about homeless families.

Just a few weeks later Swift had the job, which involved doing site visits at organizations that served homeless and low-income populations nationwide. Swift loved the work, and afterwards obtained a position at the Better Homes Fund in Newton, MA, a group that researched and acted on issues impacting homeless families.

“I was being thrown into an experience so different from what my classmates were doing,” Swift remembers. “People were going to work with people from a zillion other Ivy League schools and I was driving off to this office park in Newton, Mass. with people who were talking about their families and juggling kids.”

But the work was stimulating, and Swift says that some of the academic articles she helped author are among her most meaningful professional achievements. “For me doing work I believe in is so important,” says Swift. “There are certainly people who have been incredibly successful who don’t struggle with that and are able to just go and have an amazing experience and have great credentials even when they aren’t as committed to the mission.” Swift realized she was not this way. The impact of her work mattered.

Every Monday night, Swift visited the Bow and Arrow Pub where the Mass. Ave. Dunkin Donuts is now. Her friend from college bartended evenings there after his day at Children’s Hospital, so Swift and her classmates would gather in the dank light of the mostly-empty bar, sharing stories from their jobs.

“That group that I saw regularly throughout the week was a huge support system for me,” Swift remembers. “I realized that having a job and being able to close the door at the end of the day and enjoy your friends was really important.”

Now she had two job criteria: valuing the mission of the work she was doing, and having space for life outside of work. Swift applied to a joint MBA/MPP program at University of Texas in Austin. “Part of grad school for me was not only the education and the additional degree I would get but also the chance to get a different experience,” remembers Swift. Moving away from New England helped her achieve this, and she knew the management training she was getting would be crucial for her future work, whether in public or private sectors.

After graduating Swift joined IBM doing government sector consulting. The position provided geographic flexibility—a must since her fiancé was applying to business schools—and it combined the public and private sectors like her graduate studies had.But Swift soon realized that the work didn’t strike her fancy. She didn’t feel invested. Before long she was surfing job-search websites again.

Harvard was hiring. Swift found a position at Phillips Brooks House and joined to help found the Center for Public Interest Careers under the visionary leader Judith Kidd. “That was the first time when I really appreciated working with people you respect and with whom you share the same values and commitment to what they’re doing,” she says, identifying a new job criterion.

Next, Swift left Harvard to work at a small family foundation. She had always imagined that giving away money to promising organizations would be exciting, but it was not nearly as invigorating as she had hoped. “The bad jobs you have always help remind you of what is important to you,” she says.

Now Swift is back at Harvard, wearing many hats. Sometimes she reads files from home, other days she comes into the office and works amidst her children’s artwork, juggling students, administrators, and staff from across the University in her multi-faceted role. The job is right for now.

Discovering a fulfilling work-lifestyle combination takes time; the criteria for balance unravel and transform as careers develop and priorities shift. But the sooner people can start to articulate an understanding of what professional and personal fulfillment means to them, the quicker they can identify opportunities that embody their values.

Ginny C. Fahs ’14 is a history and literature concentrator in Quincy House. Her column looks at Harvard alums who pursued unconventional career paths and appears on alternate Fridays.