Biking for the Better 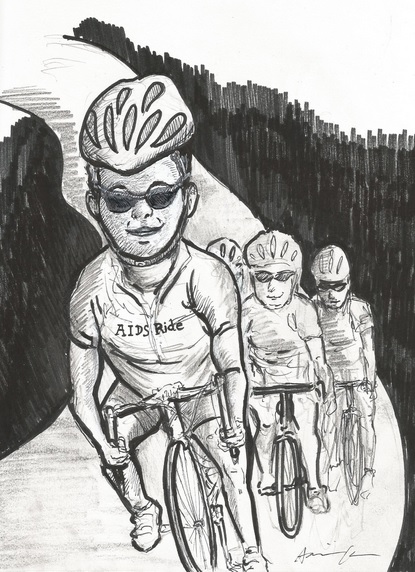 “You can't connect the dots looking forward; you can only connect them looking backwards. So you have to trust that the dots will somehow connect in your future.” –Steve Jobs, Stanford Commencement Address, 2005

Three days after graduation, Daniel M. Pallotta ’83 flew to Seattle with 38 of his Harvard classmates. He spent the next nine-and-a-half weeks returning to where he started, guiding his classmates on a bike ride across America.

His post-grad plans were months in the organizing. While some seniors dressed in suits and rushed to recruiting interviews, Pallotta and his friend Mark A. Takano ’83 spent their senior fall bumbling around House dining halls, asking every senior they encountered to join them on a cross-country bike ride after graduation. Pallotta and Takano contacted churches, synagogues, and rotary clubs across the country requesting hospitality during their journey, and it worked. The result: a crazy cross-country route peppered with free accommodations and meals, and $80,000 raised for Oxfam-America over the course of the trip.

The summer was inspiring and energizing, but Pallotta returned feeling like he needed to get a real job. “Now you need to go into the real world and suffer just like everyone else,” he remembers telling himself, the voice of convention bubbling through his thoughts. Pallotta took a job in the Massachusetts State House, where he sat around “pretending [he] was working” for seven months, until he couldn’t take it anymore and left. He moved to Los Angeles to become a singer-songwriter.

A few things happened in LA: Pallotta attempted to channel his political views into song but realized he was no Bob Dylan, the AIDS epidemic broke out, and he enrolled in business school at UCLA on his father’s request, only to realize that it wasn’t for him. He withdrew before classes even started.

“I think being gay has influenced my career choices a lot,” Pallotta says, reflecting on his risky move to pursue music in LA. “[Being gay], you learn not to be dishonest with yourself. Then you start to say, ‘Why would I be dishonest with myself in any of the other areas of my life?’”

Yet still, after seven years of writing songs and performing in coffeehouses, Pallotta felt that the music he loved was not his calling.  “The universe [was] inviting me to do something other than what I stubbornly wanted to do,” he recalls.

Pallotta had been daydreaming of another bike ride, this one a 600-mile route down the California coast from San Francisco to Los Angeles.  He brought this idea to the Los Angeles Gay & Lesbian Community Services Center, which was looking for a new signature event, and the center agreed to give Pallotta’s idea a try.  The first AIDSRide happened that year in 1994 and its 487 participants netted $1,013,000 for AIDS—far more than expected.

Before the first AIDSRide, Pallotta had believed that there was “nothing big” the average person could do for AIDS. But now he saw things differently: His passion of planning long bike trips had amounted to a new kind of fundraising, one that was lucrative, and that he was uniquely qualified to orchestrate.

Pallotta saw that the fundraising method he devised for the first AIDSRide could be replicated, and he started applying his planning talents to other events. He first expanded the AIDSRides to Boston, New York, Chicago, Washington D.C., and other major cities. Then he expanded his scope, spearheading the Breast Cancer 3-Day walks, the Out of Darkness Suicide Prevention walks, and the largest ever cross-country bike trip in which 730 people biked from Seattle to Washington D.C. to benefit the American Lung Association.

Whereas “thon” fundraising events existed before he started working on them, Pallotta was the first person to require a four-figure mandatory fundraising minimum for participation and to market the events widely using major media.  Doing so made his initiatives wildly successful; the model raised over $582 million for various causes over the course of his career.

It wasn’t all smooth sailing along the way.  Pallotta’s fund-raising company Pallotta TeamWorks failed very suddenly in 2002, leaving his finances precarious.  Even before he had his own company, his income had been unsteady. “It’s a frightening way to live and still is for me,” Pallotta confesses. “I have three kids. I have to support them, and my economic life has always been very entrepreneurial.” “

“You don’t always know where money will come from,” he pauses. “It’s not for the faint of heart, but it’s a wonderful journey.”

Flinging out his fingertips to trace the holes on the surface of the picnic table, Pallotta chuckles at the irony: the table top is composed of disconnected dots.  He mentions his friend Herb who always told him that the trouble of life is that it can only be understood backwards but has to be lived forwards. He references Steve Jobs’s famous quote from Stanford commencement—the one about the dots.

“You meet your times and the circumstances and it all comes together,” says Pallotta. “You just have to be open to it being that kind of journey.”

A Job Well Done, More To Do