In 2020, Major League Baseball shortened the amateur draft to only five rounds rather than its usual 40, due to the Covid-19 pandemic. In the two seasons since, they’ve expanded it to 20 (not including compensation rounds), The 20 is still a stark contrast to the previous 40 and cuts the number of prospects drafted nearly in half. Therefore, the undrafted free agent pool included many talented collegiate and high school players, including Zinn and Stone. 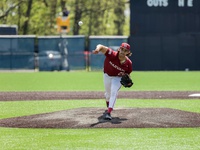 A dual outfielder and pitcher in his high school and prior baseball career, Zinn was a raw prospect with a strong arm when he arrived at Harvard for his freshman year in the fall of 2018. Working with the coaching staff, the Chevy Chase, Md. native refocused his priorities to a full-time pitching role.

His freshman year was riddled with injuries, as he arrived on campus with a stress fracture of the navicular bone in his right foot. Ultimately, his season was cut short on March 15th after the second of his two pitching appearances, a loss to Furman in which he allowed a run and two walks while recording one strikeout in an inning of work.

“I felt like I could never stay fully healthy,” he said.

Sophomore year proved to be another challenge, a dual battle with pitch control and repeated minor injuries of his back and shoulder. Although Zinn continued to develop both accuracy and velocity, he did not see the field. Instead, he established himself as an imperative team personality that helped the Crimson clinch the Ivy League title and reach the NCAA tournament.

When Zinn reached junior year, it all started to click.

“Junior fall in our inner squads and practices is when guys on the team and our coaching staff kind of started to see like, ‘Okay, we might have something here – there's some potential,’” Zinn said. “For the first time [I knew] I was gonna pitch.”

He was a strong reliever out of the bullpen, and in his second appearance, against Fairfield on March 6th, had a 1-2-3 inning that served as a point of confidence.

“It was so exciting,” he said. “Now I can kinda really start playing–It was like I got my feet in and I'm ready to roll.”

However, just four days later, the Harvard administration notified students that they had to evacuate campus due to Covid-19.

Frustrated at losing his 2020 season, Zinn consequently took an academic gap year in order to prevent the loss of his senior season in 2021. During the beginning of the pandemic, Zinn converted his basement into a full gym, borrowing pieces of equipment from his high school trainer, and pitched every day in his backyard.

“I think it was a huge benefit in terms of sort of keeping me sane because we didn't know when this [Covid-19] was gonna end,” he said. “I mean, obviously everyone who went through Covid knows it was like a time of uncertainty and anxiety.”

He spent the fall semester just off campus in Allston with teammates Jack Mahala ’22, Buddy Mwroka ’21, and Tommy Seidl ’21; having temporarily shed the time commitments that come with being enrolled in classes, Zinn was able to make baseball his full-time job. He commuted to Cressey Sports Performance in Hudson, Ma, a facility owned and run by New York Yankees Director of Player Health and Performance Eric Cressey and frequented by Major League players such as Corey Kluber and Aaron Civale.

The year off allowed Zinn to continue to develop and strive to his pitching goals. When he left campus, Zinn was barely touching 90s; his gap year allowed him to make the jump to comfortably sit at mid to low 90s, touching 95-96 mph per pitch. During his gap year, he also scrimmaged with other collegiate players that were also taking time off, and Major League scouts would come to watch their self-produced scrimmages. Between the former and his participation in the New England Collegiate Baseball League for the Bristol (Conn.) Blues, Zinn started to catch attention.

When he returned to campus, rather than return to his typical role in the bullpen, Zinn was told he would be the third member of the Crimson’s rotation: the Sunday starter. He took his promotion in stride- claiming, “It was pretty good except for two nightmarish outings.”

In 11 games, he posted a 7.50 ERA, 3-3 record and was named Ivy League Pitcher of the Week on March 14th, after a six-inning, one run, 11 strikeout outing against Cal Poly two days prior. Zinn’s season’s best performance came against Harvard’s Ivy League archrival Yale on May 15th, pitching a full six innings and striking out eight in the last game of his collegiate career.

“I gave up a couple of runs early and then just stayed out there – I basically lobbied with our coaches to let me stay there until I was at 120 pitches and then got the win,” Zinn said. “It was a great way to go out. Cool way to ride into the sunset.”

In the time between the end of the season and that fateful phone call from Washington, Zinn kept training.

“I've worked so hard for this and the worst possible scenario would be to get a chance when I've just been like messing around for two months,” he said. “[I decided] I'm gonna keep throwing bullpens once, twice a week [and] basic hitters lifting every day. Now, I'm so glad I did that. If not, I would just be kind of in a panic mode, if I didn't feel prepared, but I feel so great.”

He flew down to the Nationals’ development facilities in West Palm Beach, Fl over last weekend. After officially signing on Tuesday, Zinn will participate in mini-camp with the Nats’ other new prospects, taking on the mindset he did during his gap year,treating baseball as if it were his full-time job –except this time, it actually is.

As soon as it became apparent that Stone was talented enough to play Division I baseball, he focused on committing to one school and one school only. He wanted to follow his two older brothers, Kevin ’20 and Grant ’19, in playing at Harvard for head coach Bill Decker.

Like Zinn, the 6’6” righty also entered collegiate baseball injured, yet he was in the final stages of recovery. About a year prior to enrolling in college, Stone received Tommy John surgery, repairing his torn ulnar collateral ligament in his right arm, injured from overuse. Expected recovery from Tommy John ranges from one to two full years and typically marks the end of baseball careers for young pitchers and professional players alike.

Stone intentionally had his surgery prior to his senior year of high school, as it was his goal to return in time for his first collegiate season to share the field with his brother Kevin during his senior season. In doing so, Adam sacrificed his own high school senior season at Fairfield Prep.

“My freshman year consisted of a bunch of time in the training room and trying to get my elbow right,” Stone said. “Then we got sent home [due to Covid-19] right before I was gonna get back on the mound.” He was slated to pitch the weekend of March 15th before the Ivy League canceled the remainder of the season.

Like Zinn, baseball became a safe space for Stone during the pandemic – something he knew and trusted, his peace in a time of chaos. He spent the first spring and summer of quarantine at home training, having the benefit and experience of training with his brothers.

Unlike Zinn, however, Stone decided to enroll for the 2020 fall semester. He had the option to be on campus, which he gladly took.

“I went to campus with 12 other guys because I thought it was important to work with the coaches a little more and make sure that I was a familiar face and they knew my background and how I pitched,” Stone said. Working with Harvard’s staff helped him adjust to working with his new arm and further make up ground he lost due to Tommy John. “I thought honestly, that was a good time for me to develop and have some more one-on-one time with the coaches.”

He continued the momentum into his junior year, and his performance during fall ball and preseason made Stone the Crimson’s no doubt Saturday starter. He posted a 5.34 ERA with a 2-3 record, one save and 33 strikeouts over 10 games and 32 innings. His strongest performance was at Rice on March 3rd, where he went five innings, striking out eight and recording no earned runs.

Going into the MLB draft, Stone didn’t know what to expect; knowing it was a possibility of getting drafted, he was nervous, but was also calmed by the increased potential of signing post-draft, knowing that clubs would still be looking for new prospects due to the limited number of drafts.

The New York Yankees gave Stone a call late in the third day of the draft, offering him a post-draft free-agent contract. He took a day to contemplate, having the additional consideration that he has one more academic year before completing his degree. When it came down to it, he decided to follow his dream.

“[It] was just an opportunity that I couldn't pass up,” Stone said. “Professional baseball has been something that I've always wanted to do.”

The Stamford, Ct. native confidently inked his contract and headed down to Tampa, Fl where he will also participate in a mini-camp with fellow Yankee prospects.

Although he grew up a fan of the Yankees’ famed rival, the Boston Red Sox, Stone could not be more ecstatic to have the opportunity to join such a distinguished organization.

“I'm super excited to be around a bunch of great baseball minds that have been in professional baseball for so long and I'm just looking forward to them helping me tap into all this potential that I know I've had for so long,” Stone said.

Both Zinn and Stone will surely leave lasting marks on Harvard baseball and serve as encouragement and inspiration to their previous teammates that also have Major League ambitions.

“Coach Decker was great and still believed in me the whole way,” Zinn reflected. “And our team has a really unbelievable culture, which I think improved pretty much every year the time I was there…It's a pretty special group.”

“I'm super thankful for the coaches and the program and my experience was awesome,” Stone concurred. “I wouldn't change it.”

––Staff writer Bridget T. Sands can be reached at bridget.sands@thecrimson.com.