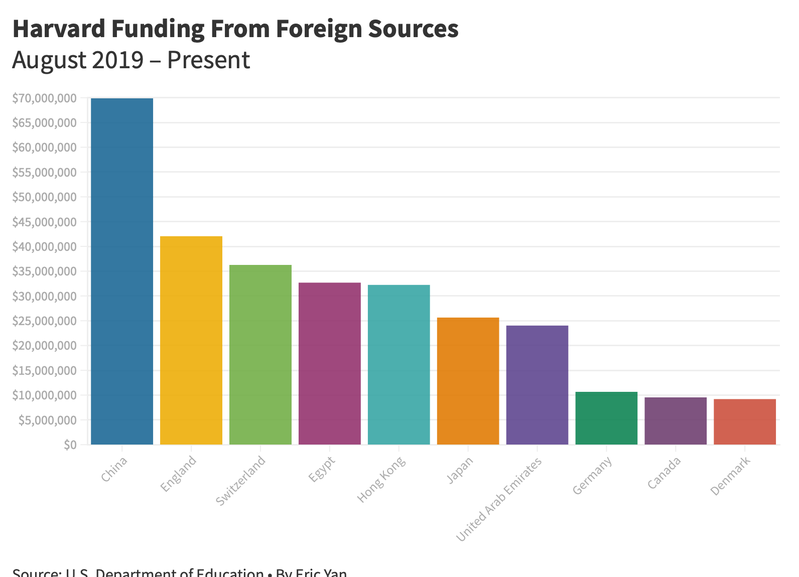 Harvard has received almost $385 million from sources in 46 countries since August 2019, according to United States Department of Education data.

Previously, a Crimson analysis of Department of Education data found that the University had received over $1.1 billion in foreign funding between Jan. 1, 2013 and July 31, 2019 — a figure later mirrored by an Education Department report in October 2020. Federal officials had been investigating whether Harvard and other universities complied with federal requirements for reporting foreign funding.

Following the investigation, Harvard updated its foreign funding reporting to include a “wider range” of contracts such as “the sale and licensing of academic publications” and “executive education programs.”

Section 117 of the Higher Education Act of 1965 requires American universities to disclose contracts and gifts from foreign sources totaling more than $250,000 in a year to the Department of Education, per the department’s website.

The Education Department publishes the data in a regularly-updated online portal. The latest update to the portal revealed an additional $10.9 million in foreign funding received by Harvard prior to Aug. 1, 2019. The University reported these funds in 2020 and 2021 following the expansion of its reporting procedures.

Sources from China contributed $69.9 million to Harvard over the same time period, outpacing all other countries. Harvard received 12.9 percent of the total funding given to American universities by Chinese sources — the most of any school.

Additionally, 15.2 percent of overall contributions from Hong Kong to American universities since August 2019 went to Harvard, along with 6.8 percent of the total from England.

Harvard also received 66 percent, or $32.7 million, of total funding from Egyptian sources since August 2019. Of that sum, $31.8 million came from a single contract.

The University did not disclose any funding from Russia during the reporting window.

University spokesperson Christopher M. Hennessey wrote that alumni and donor giving has “remained strong” following the conclusion of the University’s record-breaking capital campaign that raised $9.6 billion between July 2011 and June 2018.

“Throughout Harvard’s history, support from alumni and donors at all levels has been essential to our continued excellence in our research and teaching mission, which in turn enables Harvard’s critical impact in the world by helping to address society’s most pressing issues,” he wrote.

Hennessey attributed a portion of foreign donations to the 69,000 Harvard alumni who live in over 200 different countries.

These donations, he wrote, support financial aid, as well as “research in many critically important areas, student and faculty engagement and more.”

—Staff writer Dekyi T. Tsotsong can be reached at dekyi.tsotsong@thecrimson.com.

—Staff writer Eric Yan can be reached at eric.yan@thecrimson.com.