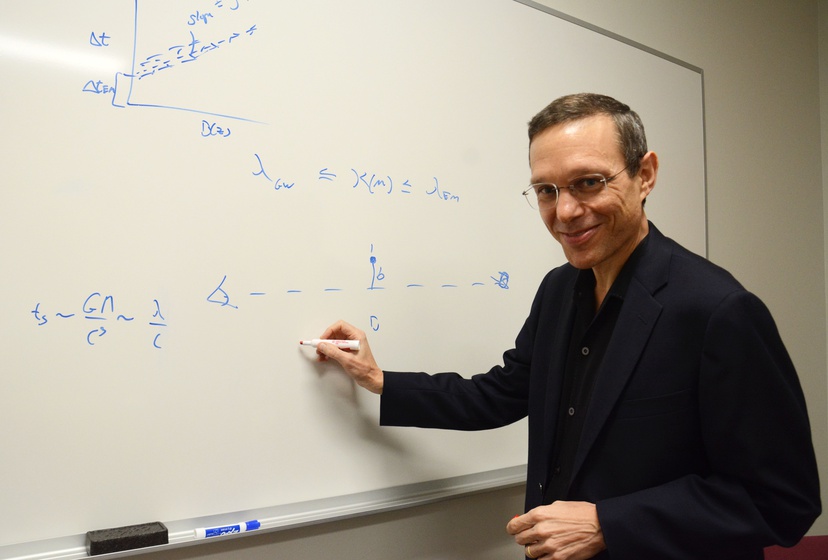 Ruiyi Li Avi Loeb, pictured here in 2017, is a Harvard professor an astrophysicist who founded the Galileo Project, a controversial center dedicated to unearthing evidence that objects made by extraterrestrial life are in our solar system.

There may be more Earth-like planets in the universe than grains of sand on all of Earth’s beaches combined, researchers predict. “The extraordinary claim is to say that we are special and unique,” Loeb says.

It’s hard to imagine a more eventful year for Harvard professor and astrophysicist Abraham “Avi” Loeb. He’s published a new book: “Extraterrestrial: The First Sign of Intelligent Life Beyond Earth.” He’s done over 2,000 interviews about it and related topics for publications around the world. And he’s hopped on private jets and schmoozed with billionaires to get funding for his newest venture, the Galileo Project, which opened in July 2021: a center dedicated to unearthing evidence that objects made by extraterrestrial life are in our solar system.

Loeb has attracted attention and widespread criticism for his unwavering commitment to unconventional beliefs. Now, through the Galileo Project, Loeb hopes to provide more concrete evidence for his claims.

Loeb gained public notoriety for his statements about extraterrestrial life in 2017, when a strange object came through the solar system. The object, named ‘Oumuamua’ after the Hawaiian word for messenger, had properties that astronomers had never seen before – it was long and thin and moved strangely.

Thesepeculiarities led Loeb to suspect that the object was made by extraterrestrial life. “Nature doesn’t make very thin objects,” Loeb says. Additionally, he says, all the other “natural” explanations that scientists have posited also involve a phenomenon astronomers have never seen before, so Loeb believes the artificial explanation is just as plausible, if not more so.

For Loeb, the explanation that Oumuamua originated from extraterrestrial life also makes sense because the sheer number of habitable planets suggests there is almost certainly other intelligent life out there. There may be more Earth-like planets in the universe than grains of sand on all of Earth’s beaches combined, researchers predict. “The extraordinary claim is to say that we are special and unique,” Loeb says.

Loeb’s ideas have appealed to several wealthy funders, including Frank H. Laukien, a visiting scholar within Harvard’s chemistry department who made his fortune manufacturing scientific instruments. Loeb has used this money from donors to start the privately-funded Galileo Project. His team is setting up a telescope system on the roof of the Harvard College Observatory that will look for these strange objects, record data about them, and try to photograph them.

For Loeb, looking for extraterrestrial life is part of his effort to “maintain my childhood curiosity.” He says that as a child he always enjoyed asking questions and was frustrated when adults would dismiss them. Now, he wants to know if “there might be smarter kids on our cosmic block,” a question he thinks the Galileo Project may answer. Loeb emphasizes that it’s worth looking for evidence of extraterrestrial life, even if just for curiosity’s sake.

Kaylie S. Hausknecht ’24, who is studying physics and astrophysics, has been helping Loeb with the project by writing code to “predict the properties” of the objects observed. Hausknecht first became interested in working with Loeb after reading his book and admiring how he seemed to care about data above all else.

“He really does follow the scientific method, but he maintains this kind of unbridled curiosity when it comes to what’s out there,” she says. Hausknecht is excited for the Center to open. “As much as people can talk about what the Galileo Project might and might not do, once we have data, that’s where a lot of fun and the science begins,” she says.

Hausknecht is also interested in the project because she thinks that searching for extraterrestrial life is “the biggest question that humanity can ask.”

“We’ve all kind of been thinking about how fragile life is here on Earth,” she says, mentioning the effects of climate change and the pandemic. “So it’s kind of a beautiful and interesting question to look up in the sky, even here on Earth, as some of the parts of the Galileo Project are doing, and think about the possibility of life elsewhere.”

However, many people, from other astronomers to the general public, have criticized the Galileo Project for lacking scientific support.

Loeb says people often criticize his ideas by saying that “extraordinary claims require extraordinary evidence.” Loeb hopes that the Galileo Project will meet their demands. He, in turn, criticizes scientists who “shy away” from studying extraterrestrial life because of public beliefs about aliens and science fiction. “There is this idea that in academia, you are supposed to work on matters that are intellectually removed from the day to day activities, interests, which I think is wrong,” Loeb says.

Loeb thinks that this aloof attitude comes from academics’ desires to prove themselves. “A lot of the work in academia is demonstrating that you’re smart and improving your image such that you will get awards, honors, appointments, and so forth — rather than try to understand reality, which is really my childhood curiosity,” he says.

But Harvard astrophysicist Jonathan C. McDowell, who has critiqued Loeb in the past, feels that the issue with the Galileo Project is not necessarily that it is researching the existence of extraterrestrial life, but rather its research methods. McDowell points to the acceptance of Search for Extraterrestrial Intelligence, a well-known research organization dedicated to understanding life and intelligence across the universe.

“The SETI enterprise has become rigorous enough that it’s accepted as a valid area of scientific inquiry even if a lot of people feel like it’s a bit of a long shot,” he says. McDowell believes that Loeb’s Galileo Project has yet to gain the kind of acceptance within the astronomy community that SETI has. “He’s kind of seen as diving into this solar system stuff, where he’s not an expert, and kind of ignoring what the people who are experts in that field have been saying,” McDowell says.

McDowell is skeptical of some of the methodologies Loeb hopes will drive the Galileo Project. McDowell calls it a “classic fishing expedition,” where a scientist casts out their net to see what they find without putting enough thought into the implications of different results.

“It’s one thing not to see anything,” he says. “It’s another thing to be able to say, ‘Because I didn’t see anything, that means that they aren’t there.’”

McDowell feels that the project as it is right now is not “rigorous” enough to still be useful even if no unidentifiable objects are found.

“I’m just not optimistic that, as currently formulated, it’s going to be terribly scientifically productive,” he says. “That’s my take, but, you know, I’d love to be wrong.” Despite his misgivings, McDowell grants that Loeb has a “right to do this research.”

Loeb acknowledges the possibility of not finding anything. However, he thinks the “fishing expedition” aspect of the project is acceptable because of the significance of potential discoveries. “If we find a rare fish, just one, that is of an extraterrestrial, technological origin, that would have dramatic implications for the future of humanity,” he says.

Nevertheless, the criticism persists — and even influenced the naming of the Galileo project. Galileo, the 16th-century Italian astronomer, theorized that the Earth revolves around the Sun, rather than the other way around — an idea that wasn’t accepted in his time, but turned out to be right in the end. Loeb says he is seeking to emulate Galileo’s pursuit of the truth even if he is also questioned. Only time will tell if the analogy holds up.

Loeb has been criticized in the form of “personal attacks on social media,” and says that “people are jealous of the attention that this project gets.” However, he says that the comments don’t bother him. If anything, he thinks enduring the criticism will help make studying extraterrestrial life a more viable path for younger generations.

McDowell agrees that there is some jealousy surrounding Loeb and the Galileo Project. He also believes that “there is a level at which the journalistic community should be a little more judicious and not just go for the clickbait of ‘Harvard professor says,’” but look into the kinds of research that garner less public attention.

Still, Loeb’s ideas continue to attract significant positive attention, including from the Galileo Project’s uber-wealthy funders. “One of the billionaires that visited the porch of my home said, ‘You're a rock star,’” Loeb says, laughing. “[This] is not something I’m used to because in academia, you’re sort of in the shadows most of the time.”

Loeb ultimately hopes that through his efforts, studying unidentified objects will become mainstream. “Sometimes the soldier needs to put his body on the barbed wire so that others would pass through,” he says.

— Magazine writer Io Y. Gilman can be reached at io.gilman@thecrimson.com.