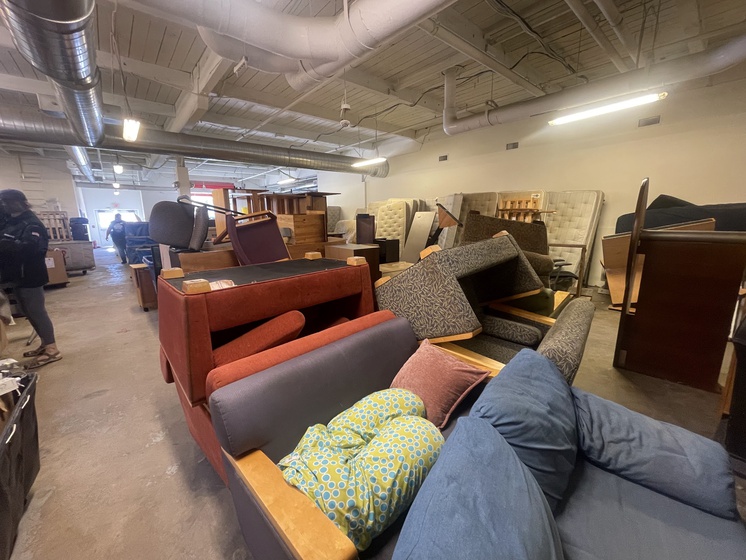 Harvard's Recycling and Surplus Center diverts waste from landfills while supplying an eclectic array of goods to university affiliates and local community members.

For Marisol A. Evans-Garcia, it all began with “two functional mini fridges.” This was the bargain that brought her to Harvard University’s Recycling and Surplus Center for the first time. The Center offers used items that the University would otherwise throw away to the public for free. Its busyness ebbs and flows with the season and time of day, often peaking around move-out.

Now a regular customer, Evans-Garcia is back at the Center, a small warehouse across the road from the Science and Engineering Complex in Allston. Standing in the shadow of a gargantuan mountain of dorm desk chairs, she admits that she is uncertain what her next great find will be but excited by the possibility that she could find “anything you can imagine.” On this Thursday morning, for instance, though there is not a mini fridge in sight, shoppers can hardly miss the monstrous scientific fridge from the Northwest Labs.

Kieran Clyne, the University’s Associate Manager of Recycling Services says that the Center is very casual. “Whatever people want, they can take,” he says. Founded approximately 15 years ago, the Center entered the fray as part of the University’s vast array of programs to reinvent its approach to waste management.

The Center accepts any item that can be reused or repurposed from any Harvard affiliate, with many of the items being left behind from move-out day or from the University’s renovation projects. The Center is open to Harvard affiliates and non-profits on Mondays from 10 a.m. to 1 p.m. and open to the general public on Thursdays at the same time.

The Center is as varied as the University itself, with each section telling its own story. In each corner of the facility lie dozens of former Crimson Print printers. In another section, the Center’s staff has piled thousands of plastic hangers. Elsewhere a complex topography has formed out of rolling hills of forgotten shoes. These dejected shoes each serve as an artifact to a bygone college experience : goth boots, professional dress flats, seemingly unused soccer cleats, and stiletto heels. While some items are recognizable tenets of campus life, other oddities are harder to understand, like a pallet of nearly a thousand cans of expired Campbell’s tomato soup.

For some shoppers, like Evans-Garcia, the Center’s eclectic selection is part of the appeal: she savors the feeling of “finding something like a diamond in the rough.”

Yet for others, shopping at the Center is a pragmatic choice. The Center serves many under-privileged individuals and communities throughout the area. In particular, there are many “Haitian immigrants who are sending stuff back to Haiti,” Clyne says.

The Center contributes to multiple sustainability goals that the University set in 2015, including reducing on-campus waste by 50 percent from a 2006 baseline and safely disposing of electronic waste. From 2006 to 2020, recycling rates on campus increased from 44 percent to a record-high 90 percent, while the number of items in trash streams decreased.

In recent years, the Center has been perpetually full, so space constraints remain a constant challenge “You can always use more space,” Clyne says. Nevertheless, the Center continues to pick up items regularly.

Clyne emphasizes that the University remains committed to making the “extra effort,” and the staff regularly send teams of movers and trucks to recover unwanted items from around the campus, even if a pickup might yield only one or two items.

For Clyne, whose office sits at the edge of the Center, the recycled items are “all pretty similar” and forgettable to him after years of working in the waste management industry. The people who come to claim these items, though, are not. Clyne, who leaves his door ajar for curious shoppers, regularly gets to see familiar faces.

Whether an item goes to furnish an Allston apartment or finds a home in Haiti, Harvard’s Recycling and Surplus Center gives each one a chance at rebirth.