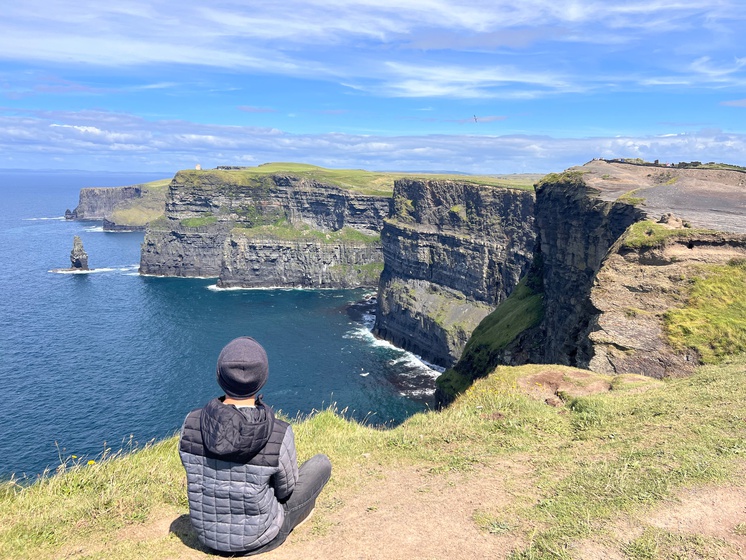 You can only circle an area so many times before the joy dulls into monotony.

In elementary school, I found pure joy in roller skating. Nowhere else was bliss and dreaming greater than on rented wheels at the Tyngsboro Roller Kingdom a few Massachusetts towns over. Skating was my ultimate solace, poetry in motion — that is, until it started to feel like a prison.

I approached skating the way a child at the playground barrels fearlessly down the slide — with complete faith, wholly committed from head to toe. Whether it was a friend’s birthday or family outing that brought me to the rink, I’d push off and push off with all my might until I was gliding so fast the world around me blurred. I loved the thrill that consumed me with each stride — the feeling of treading the earth so effortlessly and unencumbered.

But what kept me returning was the mental clarity that came with being suspended in speed, drawing my own line on a beige floor already marked by the imprints and stories of thousands. No outside worry could break my concentration: it was just me, my skates, and the path I wanted to take on that endless swatch of hardwood. Within that oval rink, against the backdrop of some disco song, freedom seemed to glow as bright as the neon lights and arcade games that filled the venue.

I don’t remember when the magic faded: it just did. And I don’t know why exactly, but I figure it had something to do with the repetition. You can only circle an area so many times before the joy dulls into monotony. Before the color washes away and the songs, played for the hundredth time, suffocate you. Before the skates become shackles.

I wouldn’t touch another pair for over a decade.

Growing up, only my fascination with family history could rival my love of skating. I was the little boy tugging on Grandma's dress when everyone was fast asleep: "Bà Ngoai, please tell me one more." I found myself sitting among my family's mothers and wives, absorbing their strength as they spun tales, laughed, and gossiped over games of backgammon and Vietnamese lô tô.

In my family, there are twenty-one South-Vietnamese war refugees — boat people from the Exodus of 1978. They all conquered violence, persecution, and the worst fear imaginable — yet not a single one escaped the ten-year-old wielding a banana microphone and fumbling with his Questions notebook. Like skating, though, that legacy started to bound me.

War survived in my father’s sporadic outbursts and my mother’s periodic breakdowns. When I announced my sophomore year of high school that I’d won a full scholarship to study abroad, I wasn’t met with acclaim but alarm. Relatives told me I’d be killed by the country’s government or taken prisoner by extremists. Suddenly, being the son of refugees meant being forever tied to an exact moment in time. It meant fear of almost everything and everyone spreading through family branches like a wildfire fueled by racing winds. I was back in the rink.

This past summer, I studied peace and comparative conflict resolution in Ireland and Northern Ireland on a fellowship aimed at tracing the travels of the American abolitionist Frederick Douglass. Between visiting the peace walls that divided Protestants and Catholics in Belfast and navigating the Luas en route to Riverdance at Dublin’s Gaiety Theatre, I had the opportunity to meet Kenneth B. Morris Jr., a direct descendent of both Frederick Douglass and Booker T. Washington. In hours-long conversations, he’d share with me the joys and burdens of carrying such a powerful name — a pressure so great that his grandfather, Frederick Douglass III, took his own life. When my peers invited me to skate with them one Friday afternoon, I sat at the edge of the rink, reflecting on what Ken told me about grappling with his history.

“The future depends on how we carry it forth, Ryan. I never tried on his shoes because they’ll always be too big,” he said, his eyes glinting with a generations-old wisdom. “Don’t ignore the voices of your ancestors calling on you, but walk in your own shoes to a greater tomorrow.”

Something within me stirred, and instead of entering the rink, I carried my skates outside. After thirty minutes of practice in the rink’s parking lot — compensation for my ten-year hiatus — I flew down the cobbled streets of Dublin, weaving between cars and pedestrians. Wind blasting past my face, I felt like I did ten years ago — boundless. It was so familiar yet completely new. So simple, yet revelatory. Never before had I skated in the sunshine.

For the longest time, the figure of the refugee was static to me — like the subject of a vintage photograph, gaping from the confines of a black-and-white plane. And I thought that doomed me to skating over and over in an endless circle, my future enclosed within a rink. But I’ve come to understand that I can navigate my legacy within my own terrain. I don’t have to choose between living life entirely adjacent to my family or divorcing it completely. Like the refugee who transcends boundaries — who makes anywhere his home — I can live within the gaps between places. I can skate outside.

And just like that, my family’s stories once again became wells of inspiration and courage. Every time I’d study an extra hour or sacrifice going out with friends, I summoned the tenacity of Ba, Dad, who swam literal rivers to get to school, one hand battling the current and the other holding his books high. I beat the anxiety of leading projects by unleashing the fearlessness of my grandmother, who organized an uprising of village women when their children were imprisoned for playing near a protest site. When peers complained about boredom, my mind soared to the ingenuity of my uncles who braved monotonous months in refugee camps with makeshift box-and-plywood ping-pong tables, and I encouraged everyone to invent our own game to pass the time. This past empowers me today in pursuing journalism; my stories aren’t just about war, but about everything from disabilities to fatherhood, feminism to exam stress, incarceration camps to growing up gay in Moroccan society. My stories have become — unequivocally — my own.

On the first day of sophomore move-in, I strapped on a comically large pair of inlines that I bought upon my return from Ireland: the Powerslide One Zoom 100 Freeskates. Descending in the elevator, I balanced my weight on the giant wheels. And as the blue light beeped from six to five to four, I envisioned the path that lay before me — some winding line through the hordes of tourists in the Old Yard, along the length of the tree-lined Charles River, and into the storied neighborhoods of Cambridge. Exiting the building, I took a deep breath and passed by a friend asking where I was headed.

“I’ll figure it out,” I yelled as I pushed off onto the pavement, into the blurs beyond.
—News staff writer Ryan H. Doan-Nguyen can be reached at ryan.doannguyen@thecrimson.com. Follow him on Twitter @ryandoannguyen.