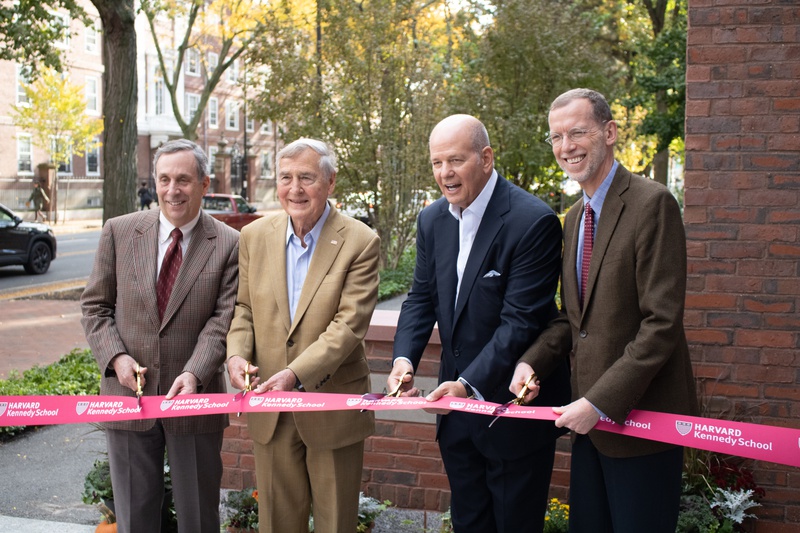 Elmendorf, who confessed he grew up a fan of the New York Yankees, compared Allison’s legacy at the Kennedy School to that of baseball slugger Babe Ruth at the old Yankee Stadium.

“The Yankee Stadium of that day was sometimes described as the ‘House that Babe Ruth Built’ because it was Babe Ruth’s incomparable talent that was the foundation on which the Yankees of the 1920s and 30s and subsequent decades was built,” Elmendorf said. “Similarly, I always think of the Kennedy School as the ‘House that Graham Built.’”

When Allison began his tenure as founding dean of the modern Kennedy School in 1977, he did not have the easiest task ahead of him, according to Elmendorf.

“The hard work of turning ideas into reality did not get done by itself,” he said. “All this depended on Graham’s vision and energy, his ability to draw together people — including some who are here with us today — to build this school and to push its mission forward.”

“We are, around the country and around the world, making a profoundly positive difference in many people’s lives — and that would not be the case without you,” Elmendorf said to Allison.

Bacow, who graduated from the Kennedy School with a master’s in public policy in 1976, said that one of the required courses he took as a graduate student at Harvard was taught by two faculty members: “one of whom was a legend, Dick Neustadt, and then there was this other young faculty member — who I think was still a junior faculty member at the time — and that, of course, was Graham, a legend in the making.”

Bacow reflected on advice he gives to students, saying he tells both undergraduate and graduate students that they will have a great experience at school if they can build a lifelong relationship with at least one faculty member.

“I consider myself exceptionally fortunate that Graham falls into that group of faculty members who I’ve been blessed to stay in touch with now — hard to believe, Graham — for a half a century,” Bacow said.

Before concluding his remarks, Bacow said he owed Allison an apology.

“I know that there’s at least one thing that I disappointed you in, so I offer my humble apology,” Bacow said, turning to Allison. “Here it is, 50 years and counting, and I’ve still not learned to fish.”

Bacow raised his glass of champagne: “To the best fisherman in the Kennedy School.”