For 11th Year in a Row, Harvard Falls Short of Boston’s PILOT Request 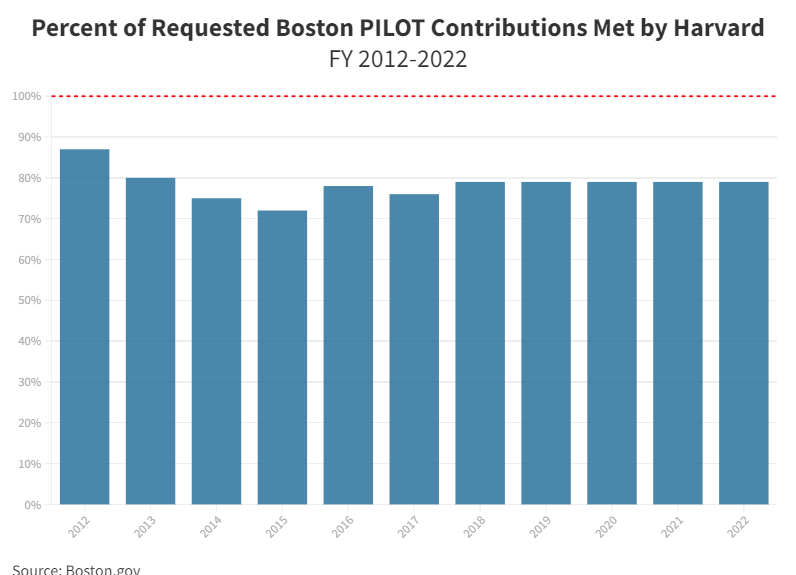 For the 11th consecutive year, Harvard fell short of financial contributions requested by the city of Boston under a program in which nonprofits are asked to voluntarily give the city money in lieu of taxes.

Under the Payment in Lieu of Taxes program, or PILOT, the city requests voluntary contributions from nonprofit “educational, medical, and cultural” institutions with property in Boston valued at upwards of $15 million. The institutions, which are exempt from paying property taxes as nonprofits, are asked to pay 25 percent of the property taxes they would have paid if not for their nonprofit statuses.

In fiscal year 2022, Harvard contributed a total of almost $10.8 million — 79 percent of the nearly $13.7 million request, according to city data. This fiscal cycle marks the fifth year in a row that Harvard paid 79 percent of the city’s PILOT request.

The 2022 payment includes $6.8 million in “community benefits credit” — programs run by institutions that are considered by the city to “uniquely benefit Boston residents.”

Harvard cites the Arnold Arboretum, Harvard Law School Pro Bono Program, and summer academies hosted on campus for underserved high school students as community benefits. Fifty percent of an institution’s PILOT payments can come in the form of such programming.

Boston is home to many nonprofits, making much of the city's land tax-exempt. The PILOT program is meant to “offset the burden placed on Boston taxpayers to fund City services for all property owners,” according to the city of Boston's website.

Harvard not paid the full amount requested by the city under PILOT since the program’s inception in 2011.

In a statement, Harvard spokesperson Amy Kamosa defended Harvard’s contributions to the city.

“As a nonprofit, Harvard’s robust engagement with its host communities, including the City of Boston, takes many forms,” she wrote. “The University reliably makes PILOT payments, pays municipal taxes on all non-exempt property, and works directly with the community through meaningful, and--increasingly more critical--community programs, initiatives and outreach.”

“These local benefits are an important extension of Harvard’s mission, serve thousands of local residents every year, and reflect years of collaboration between the University, its neighbors, and city partners,” she added.

Harvard’s 11th year of payments that fall below the requested amount comes as the University is moving ahead with ambitious development plans in Boston's Allston neighborhood, where the school owns roughly one-third of the land.

In a statement, Boston City Councilor Elizabeth A. “Liz” Breadon, who represents Allston-Brighton, called for reforms to the PILOT payment system.

“As the Boston Institutional Master Planning process for Harvard kicks into gear in the not-too-distant future, City and institutional leaders should review the efficacy of the PILOT program and more clearly define how community benefits are evaluated,” she wrote.

Breadon also called for further cooperation between Harvard and the city.

“I believe that overall, the City of Boston under-leverages the resources of its many nonprofit institutions of higher learning,” she wrote. “I look forward to strengthening partnerships with institutions like Harvard.”