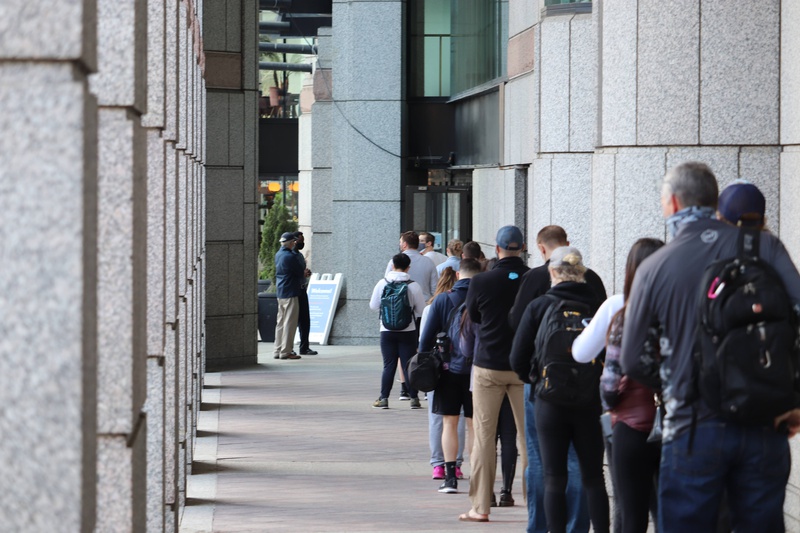 People line up for Covid-19 vaccinations outside Hynes Convention Center in Boston.

Though Harvard freshmen won’t begin moving into campus dorms until Aug. 25, Adam Zhou ’25, who lives in the Philippines, booked his flight to the United States so that he’ll arrive more than two weeks earlier.

Given the Philippines’ “extremely slow” Covid-19 vaccination rollout, Zhou said, he plans to get immunized while he stays with his sister in Maryland before the fall semester starts. The Philippines had fully vaccinated roughly 4.7 percent of its population as of Tuesday, according to a Reuters database.

“I think what’s most feasible for me now is to enter the United States a bit early, stay with a family member, and get vaccinated there,” Zhou said.

Some international students, including incoming freshmen, reported navigating hurdles to get vaccinated this summer before in-person life at Harvard resumes in the fall.

Harvard will require that all students receive a Covid-19 vaccine authorized by the U.S. Food and Drug Administration or World Health Organization in order to live on campus next semester. But while vaccines have been widely available to people 16 and older across the U.S. since April, many other countries are lagging behind in their vaccine rollouts and have yet to expand eligibility to the general public.

Some international students said they thought Harvard would force them to quarantine if they had yet to be vaccinated upon their arrival to campus this fall, based on information posted on several Harvard websites. University spokesperson Jason A. Newton clarified in an email to The Crimson Wednesday morning following the publication of this story that those websites had not been updated with the latest University requirements, which do not include a quarantine.

Harvard will vaccinate students who are unable to receive an approved vaccine in the fall, but those students will need to undergo testing after they arrive on campus, according to Newton.

Zhou said he believed he would need to quarantine upon arriving on campus based on previous University communication to international students. He said he hoped his early travel plans would allow him to avoid a travel quarantine at the beginning of his first semester.

“I’m trying not to get into the quarantine situation just because I feel it would really hinder my social interaction and getting to know people,” he said.

Dhrubhagat Singh ’25, who also lives in the Philippines and remains unvaccinated, said vaccines have been “extremely scarce” and the process for accessing them has also been opaque.

Singh said he plans to stay with a family friend in New York City for a few weeks before move-in and get inoculated then.

“It’s my first time going to America and it’s a lot of new things to adapt to,” Singh said. “I was hoping that I would potentially get the Johnson & Johnson vaccine in New York City because it’s one dose.”

Some international students said they anticipate they will only be able to get vaccinated after arriving on campus this fall.

Antara Bhattacharya ’25 said she has yet to be immunized because only people 18 and older are currently eligible to be vaccinated in her home country of India.

“I just turned 17 a couple weeks ago,” Bhattacharya said. “I would rather be on campus and then get the vaccine because I’m not sure they’re going to lift the age limit.”

Other students from India said while they are partially vaccinated, seeking their second shot has been complicated.

Arhan Kumar ’23 said he received his first dose of the Covishield vaccine — a version of the Oxford-AstraZeneca vaccine manufactured in India and one of the vaccines authorized by the WHO for emergency use — at home in New Delhi in early May. Kumar said he was unable to receive his second shot before he left India to live on campus this summer because revised government guidelines postponed his appointment.

Since Covishield is unavailable in the U.S., Kumar said he is mulling over his possible options if Harvard requires him to begin a new vaccine regimen.

“It’s really just too much for me to now restart with the two doses of vaccines,” he said. “If they say that I need to just start over, I might go and get the Johnson & Johnson since it’s one shot.”

Sasha Agarwal ’25 said she is awaiting her second Covishield dose at home in Kolkata.

While the Indian government has reduced the minimum 84-day interval between the two doses of the Covishield vaccine to 28 days for students studying abroad, Agarwal said there are still challenges to securing full inoculation.

“Only government hospitals can give out second doses with a shortened dose gap,” she said. “Most of the slots that are available to us are private hospital slots, and so it’s been a little hard reaching out to a hospital, getting those formalities in place, and being able to qualify.”

Still, Agarwal said she expects she will be fully vaccinated by the fall term — even if she has to wait the usual 84 days.

“Even if, in the worst-case scenario, it’s extremely close to when I fly out and move in, I should still be able to get it in time,” she said.

—Staff writer Alex Koller can be reached at alex.koller@thecrimson.com.