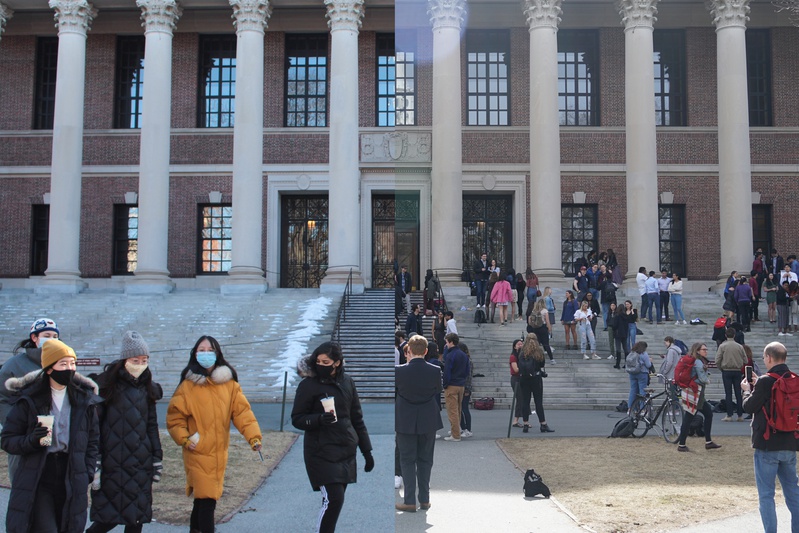 Exactly one year ago, Harvard administrators informed undergraduates that they would need to evacuate campus in just five days, due to the Covid-19 pandemic. From March 10 to 15, 2020, students packed up their rooms, made travel arrangements, and said goodbye to their friends and classmates. The Crimson’s Multimedia Editors documented those hectic five days, and one year later, they revisited some of the same locations to capture the new normal on campus.

After students were notified that they needed to depart campus by Sunday, many members of the graduating senior class gathered on the stairs in front of Widener Library to pose for an impromptu senior class photo. One year later, Widener Library is still closed to students and public visitors, leaving tourists to roam the yard wearing protective masks.

In the days leading up to the evacuation, students scrambled to pack their belongings and arrange for storage or shipment. Students frantically purchased cardboard boxes and storage equipment, while simultaneously making travel arrangements to leave campus. One year later, the same street is deserted except for one woman wearing a face mask.

Amid the uncertainty of Harvard’s campus de-densification, some undergraduates gathered with their classmates to play sports and spend time together before having to depart. One year later, a small group of students, wearing protective masks, walk together down Mill Street to take a break from remote classes and enjoy the sunny day.

While many were busy arranging plans for departure, some students gathered in Harvard Yard to spend their last moments with friends and classmates. Students played frisbee in the mildly warm weather, walked along the Charles River, and experienced the feeling of campus one last time. One year later, many seniors and juniors are back on campus, but the Yard is still relatively empty. Although domestic and international travel has been heavily discouraged by national authorities, some tourists continue to frequent Harvard Yard and place their hand on John Harvard’s foot.

Many undergraduates also congregated at parties organized by final clubs and other social organizations to celebrate their last moments together; for many seniors, parties like these would be the last time they saw many of their classmates and friends. Final clubs, like the Owl, had lines spilling out the doors. One year later, Holyoke Place is deserted, only frequented by the occasional jogger or Lowell House resident.

The Richard A. and Susan F. Smith Campus Center, once bustling with students and Harvard affiliates, has been recently reopened to students under strict guidelines, as part of Harvard’s phased campus reopening. The Smith Center’s Harvard Commons has been completely rearranged to guarantee social distancing at all times, and visitors are required to book a spot in advance.

Over the past year, Harvard’s campus has dramatically changed. Traditionally, students would be preparing for midterms, enjoying the occasional warm day, and living in campus accommodations during March. However, due to the impact of Covid-19, undergraduates are scattered across the world, attending classes from their computers. As the pandemic continues through the spring, some students are living on campus, but many are looking towards the fall 2021 semester to potentially return to what was previously viewed as “normal”.

In Photos: The Front Lines of Harvard Square