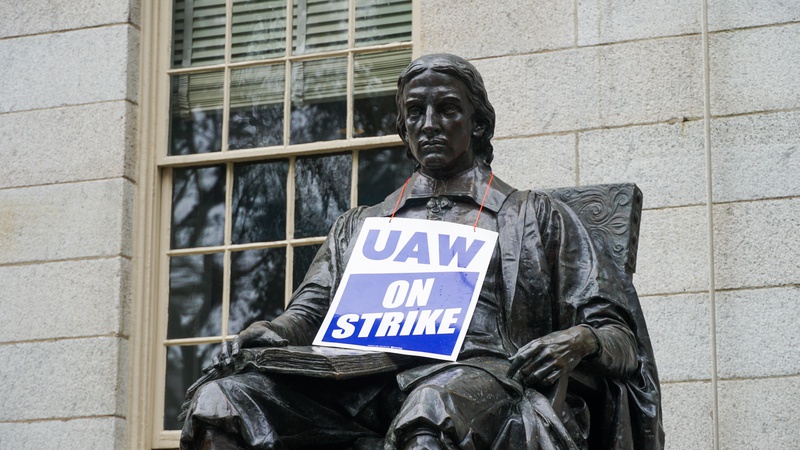 On Wednesday morning at 6:00 a.m., Harvard Graduate Students Union-United Automobile Workers began its second strike in two years. Graduate and undergraduate student workers planned to stop teaching and conducting research for three days, as members of the union picketed through Harvard Yard and the Longwood campus. After failing to reach a contract agreement with the University, the union decided to go on strike to demand greater raises, agency shop, and reforms to Harvard’s procedures for handling discrimination and harassment claims.

The Crimson’s Multimedia Editors documented the union’s three days on strike, capturing their picketing through Harvard Yard and Longwood campus.

On a cold, rainy Wednesday, Harvard’s graduate student workers assembled the picket line and marched through Harvard Yard. From blocking delivery trucks at 6 a.m. to rallying in the Science Center Plaza at noon, the picketers were chanting and shouting all throughout the day.

Around Harvard Yard, a variety of chants, songs, and call-and-response shouts could be heard throughout the three-day strike. Picketers carried buckets to hit with sticks, adding noise on top of their chants.

On both Wednesday and Thursday, picketers circled around the entrance to the Smith Campus Center, attempting to prevent Harvard affiliates from entering the building. This picketing technique forces others to “cross the picket line” in order to attend lectures, visit office hours, or access labs.

Over the past few months, the union and the University have clashed on a number of issues, including compensation, third-party arbitration for claims of identity-based discrimination and sexual harassment, and agency shop. These issues are the same sticking points that led to the union’s December 2019 strike that lasted for 29 days.

During Thursday’s pickets in Harvard Yard, the weather stayed free of rain after a series of showers Wednesday. More graduate and undergraduate students in support of the union joined the picket line.

On all three days of the strike, the union hosted rallies in the Science Center Plaza to update picketers and strikers on the status of bargaining committee meetings, discuss the importance of striking for their demands, and demonstrate their strength in numbers. A variety of speakers shared their thoughts with the crowd and tried to boost morale for the rest of the day, despite the cold weather.

During Thursday’s rally in the Science Center Plaza, the union’s Sergeant-at-Arms Maya I. Anjur-Dietrich spoke about Wednesday’s bargaining session with the University. “Our disruption and our strike, and your walkout and everything that you’re doing to your professors is working and is going to get us a better offer when we get back to the table when they’re ready to bargain again,” she said.

Throughout Thursday afternoon, picketers carried around a structure with the phrase “Harvard consumes our labor” outside the Smith Campus Center.

As the picketing continued on Thursday afternoon, strikers marched their way through the Smith Campus Center, attempting to disrupt the usually quiet space. With two days complete of the three-day strike, picketers were looking toward their final day to demonstrate in numbers.

On the third and final day of the Harvard graduate student union’s strike, picketers continued to march across campus forming picket lines near the Science Center and Memorial Hall to prevent students and parents from attending large courses. With a large set of events related to First-Year Family Weekend on Friday, strikers desired to disrupt the atmosphere of campus.

At a 12 p.m. rally for the Harvard graduate student union, HGSU Bargaining Committee member Cory W. McCartan spoke to a large crowd of student workers and supporters of the union. Strikers were near Sanders Theater in order to picket large undergraduate courses including CS50 and Ec10a, which allowed both students and parents to attend.

During an event in Sanders Theatre for First-Year Family Weekend, more than three dozen supporters of the graduate student union interrupted a speech by University President Lawrence S. Bacow. The protestors chanted “fair contract now” in the theater before walking out and encouraging students and parents to join.

Demonstrators walk in a circle outside the main entrance to the Science Center on Friday afternoon. As the three-day strike reaches its end, student workers await to see if any possible outcomes arise following their picketing and demonstrations.