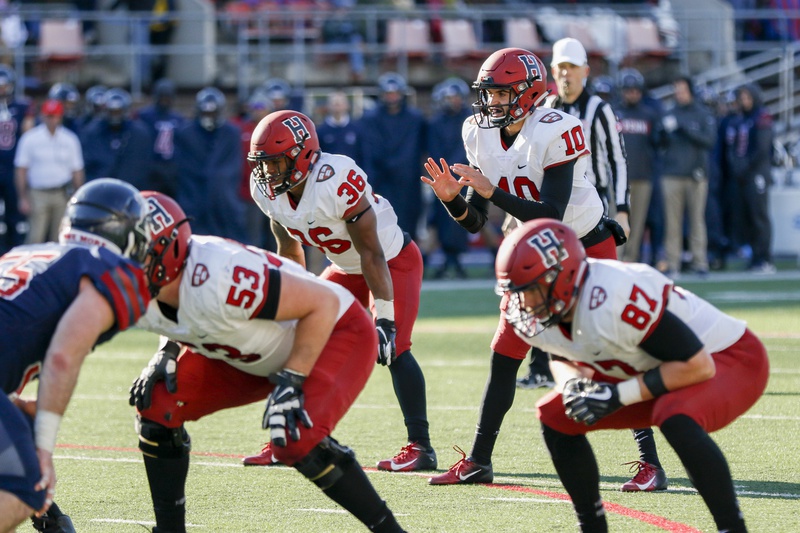 Harvard looks to take down Howard during the first matchup between the two programs in history.

{shortcode-4876d1e643776ac1f519649d79c6adf3db040869} CAMBRIDGE, MASS. — In the historic Harvard Stadium, the Crimson and Howard met for the first time in either program’s history. The Bison had never played an Ivy League team, and Harvard had never squared off against a historically black college or university (HBCU) team. From the opening whistle, the landmark contest was all Harvard, as the team trampled its opponent, 62-17.

“For me it meant a lot more family coming to the game,” said sophomore defensive lineman Truman Jones. “They were really excited to see me playing an HBCU, they didn't really recognize what kind of football Harvard played and so I think playing an HBCU was a good showcase of that. If I wasn't here I probably would be at an HBCU.”

For the Crimson (2-1, 1-0 Ivy), the defensive unit and the running back squad shined brighter than they have all season. In the first 30 minutes of play, the Crimson logged three blocked punts. This tied the FCS season record for any team prior to the contest — held by Arkansas Pine Bluff — and was one short of the FCS record for a game at four.

Receiving the opening kickoff, Bison (1-5, 1-1 Mid-Eastern Athletic) sophomore Jemichael Jones was the first casualty of the brutally defensive first quarter. The sprinter cradled the kick at the three-yard line, only to lose his helmet in the vicious hit leveled by Harvard junior Jack McGowan. The opening kick might as well have been a metaphor for the rest of the contest as the Crimson leveled its opponents.

The ensuing drive net nothing for the visiting Howard. After three plays, the Bison sent out their special teams squad to punt the ball to Harvard. Instead, the Crimson defense collapsed on the kick and freshman Khalil Dawsey stuffed the attempt, sending the ball teetering toward the friendly goal line where junior Jason Brown fell on the runaway ball, eight yards from six points.

The first play from scrimmage, junior Harvard quarterback Jake Smith dished the ball to classmate and running back Devin Darrington who looked to be swallowed up at the four. The pile of Howard defenseman then started shuffling toward the goal line. With the help of a few Crimson big men, Darrington fell into the end zone for six.

Harvard’s second touchdown came in much the same fashion as the first. To start the second quarter, the Bison lined up yet again to punt, this time from its own 19. Much like its first punt of the contest, the Crimson broke through the offensive line like water. This time it was sophomore running back DeMarkes Stratford who touched the ball first, sending it ricocheting back into the endzone and falling on it himself, his first career score.

Two wasn’t enough for the punt return squad. With only two minutes left in the half, Dawsey grabbed his second block of the contest and of the season. This time, Howard recovered and the runaway ball, granting the home team good field position rather than six points.

The two might as well be the same thing, however. Three straight gives to sophomore Aidan Borguet earned Harvard the requisite 19 yards needed for the score. Those 19 yards were not given easily, with Borguet breaking upwards of six tackles and carrying four men into the touchdown with him on the final push.

The Crimson returned the ball with only 1:24 left in the half and the Bison needed only to make it to the halftime whistle. The visitors failed to do so. Wasting only 29 seconds, Harvard earned possession again after yet another near blocked punt. Darrington grabbed 44 rushing yards on two plays, opening the pass from Smith to junior B.J. Watson for another score. The Crimson entered the locker room up, 41-3.

{shortcode-4b8c780f2817e68f73676d6d2c966d9521144d63} The running backs catalyzed the team’s offensive production. Harvard managed 288 yards on the turf and seven touchdowns on the afternoon. Darrington led the squad with 12 carries for 115 yards and three touchdowns. The production statistics are stinted, as they’re only through two quarters. Halfway through the third stanza, Smith, Darrington, and Borguet were sent to the sideline and replaced by sophomore quarterback Luke Emge and sophomore running backs Daniel Abraham and Stratford.

The replacement did little to impede the Crimson’s offensive production. Stratford, in his first collegiate contest at the spot, averaged 18 yards a carry as he went for 108 yards and two touchdowns on six carries. Both of his touchdowns were from over 30 yards out.

“This is my first game, so I just embraced the opportunity that I had and wanted to be the best addition to my team that I could be.” Stratford said. “I just went out and did my best to do my job and everything ended up working.”

Smith has been nearly perfect over the past two contests, setting a career-high in pass yards in week one against San Diego and another personal best in touchdowns in last week’s routing of Brown.

Against Howard today, Smith struggled through the first quarter. His first pass of the contest was directly into the hands of Bison corner CaSaan Dixon, knocked to the ground be the targeted receiver senior Jack Cook. Smith went back to the air again only after the first down was secured by Darrington. This time cook wasn’t there to knock down the pass that flew into the hands of Rodney Dennard.

The start following drive was Howard’s only bright offensive spot. Bison quarterback Quinton Williams threw a strike to Kyle Anthony across the middle of the field. Crossing routes removed Anthony’s defenders, allowing him to maneuver his way to the Harvard seven. Then the Crimson defense recovered.

Two sacks for six and nine yards, both by Jones, forced a Howard field goal from the 17. Kicker Nick Fariss rose to the occasion and granted the Bison their first points of the contest with three.

Smith’s performance leveled out for the rest of the game as he finished with 113 yards and a touchdown, hitting 50 percent of his targets.

Williams has risen to the occasion. Only last week, Heisman winner and NFL quarterback Cam Newton’s brother, Caylin Newton, announced his decision to transfer from Howard. Newton served as the starting quarterback of the team only until last week. The contest in Cambridge then, is Williams’ — a freshman — second game.

“Quinton WIlliams was the first player I went to go see after my press conference,” Howard coach Ron Prince said. “Quinton Williams is a winner, a state championship in high school, he’s got poise, he works to prepare, he’s got ability both with his arm and with his feet, he’s got it. “We didn't give him enough protection today we didn't do a good job as coaches putting him in a position where he could be successful but we’ll go back and try to improve next week.”

Last week, in his first collegiate start, the rookie threw for 179 yards and three touchdowns. He performed as well today, notching 13 completions on 23 attempts for 224 yards. He also added one touchdown and didn't throw an interception despite the pressure leveled by the Harvard defensive line that amounted to seven sacks.

On multiple occasions, Williams found a man deep over the Crimson secondary, granting the Bison good field position. As a result, twice Howard went for it on fourth down deep in Harvard territory. The first attempt landed incomplete out the back of the endzone. The second attempt, this time in the third quarter, landed true, as Michael Cornwell hauled it in with one hand.

The Crimson’s defense was close to immaculate through the first half. By the end of quarter two, the Bison had managed exactly zero yards on the ground. Through the final whistle, Harvard managed seven sacks for 47 yards lost. In comparison, Howard pulled down the home team’s quarterback only once.

“Their offensive line was pretty tall and all big guys upfront,” Jones said. “We’ve been working all week on different pass-rush moves, different line games, to just try to confuse them. I think tonight, we just played fast. We didn't have too much on our game plan, so we just played fast and played hard.”

Aside from the near-record setting punt block performance by the Crimson, the squad was seven points away from tying the program record for points. In 2012, Harvard scored 69 points against Columbia. The home team had a chance to best the record.

With just under three minutes remaining in the final quarter, the Bison’s punter opted to go down with the ball rather than grant the Crimson it’s fourth, and record-tying block. Harvard took over possession at the Howard 15-yard line. Seven points from a program record, Emge knelt the ball four times rather than make an attempt at the goal.

Present for the game, but unnoticeable in the statistics, was the Howard University “Showtime” Marching Band. Halftime included a performance from this renowned band that has been featured in various National Football League games and the second inaugural parade of President Barack Obama.

“I think [Harvard Howard game] is great,” Prince said. “Like minded institutions — we believe in the student-athlete model, and we’re really pleased with our young people. We went into some of the schools in the Boston area yesterday to read to kids in elementary schools. That’s who Howard is, that's who we should be. We want to build a better team but the event itself is important and I think it's very symbolic of a lot of things.”