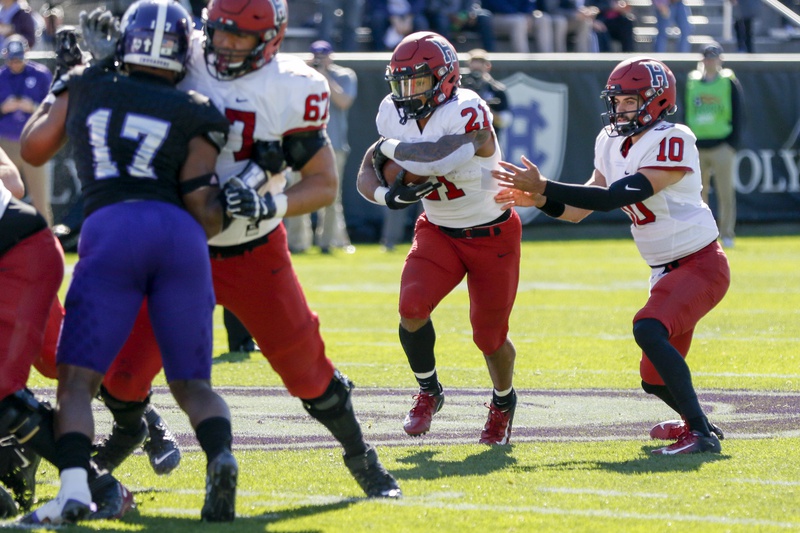 On the heels of its victory over Holy Cross last weekend, Harvard is looking to overtake Ancient Eight rival Princeton.

When it comes to rankings, Harvard just can’t seem to outscore Princeton. There’s the oft-cited U.S. News National University Rankings, which the Tigers have sat atop the past eight years (Harvard coming in at a measly second place). You’ve got your pre-season Ivy League football power rankings, where the Crimson fell just below Princeton’s third-place start. Harvard even loses when it comes to food – the Tigers’ dining services beat HUDS by over 200 spots (though I’m not sure how a school without Red’s Best Catch even clawed its way out of the top 500). However, the Harvard football team is hoping to change that narrative in this weekend’s battle on the gridiron.

“Princeton’s a very good team — they’re obviously scoring a lot of points out there,” head coach Tim Murphy said. “But at the end of the day, every game we go into is a game we believe we can win. This weekend is no exception.”

Coach Murphy’s optimistic outlook may not be enough to cage the undefeated Tigers, who haven’t lost a game since 2017. The Powers Field-powerhouse outscored their opponents by a margin of 340 points last season; however, last year’s battle against the Crimson was certainly a speed bump on Princeton’s road to the Ancient Eight title. Though Harvard ended up losing to the Tigers by a touchdown, the Crimson defense ensured that Princeton was never ahead by more than two possessions.

“It's definitely a sour taste in our mouth,” said Harvard quarterback Jake Smith on last year’s loss to the Tigers. “We're looking forward to getting back on the field and showing them how we started this team.”

The Crimson is currently riding a win streak of its own. The squad leads the nation in sacks, blocked kicks, and blocked punts, its most recent win coming in a 31-21 crusade against Holy Cross last Saturday. Coach Murphy cites his team as being “much improved” since the last time it took on the Tigers, a sentiment that many players seem to echo.

As the trend goes, Princeton leads Harvard in scoring offense this season — the Tigers are ranked first in the Ivy League and second nationally to the Crimson’s second and 10th-place standings, respectively. Quarterback Kevin Davidson has truly taken the Tigers’ reins, the California native leading the FCS in both passing efficiency and completion percentage.

Even more prominent for Princeton this season has been the team’s game on the ground. A trio of top running backs have propelled the Tigers to offensive dominance, with junior Collin Eaddy coming in at sixth in the country in scoring.

“[Eaddy] is a speed guy and a big guy — he’s a little bit like our DeMarkas Stratford but bigger,” Murphy said. “He’s a guy you’d better focus on and contain because he’s an elite track athlete and can take it to the house on any snap.”

Though Harvard’s defense may have its hands full, the Crimson’s special teams squad is hoping to maintain its punt-blocking prepotency. Harvard has blocked five of 34 attempted punts this season, adding yet another first-place statistic to the team’s national repertoire.

On the other side of the pigskin, Harvard will certainly have the tiger by the tail in taking on the Princeton defense, the Tigers second only to the Crimson itself in sacks per game.

“We're expecting to see an athletic defense out there on the field,” Watson said. “Their defense is pretty straightforward, but they're a fast and physical football team that's going to come out there and go until the last whistle.”

Aside from the potential of snapping Princeton’s win streak, Harvard has a few records of its own that the team is coming closer and closer to breaking. Smith is a mere eleven touchdowns shy of breaking the squad’s single-season touchdown record, and Murphy is only two wins away from beating out Yale’s Carmen Cozza for most total wins in Ancient Eight history.

“That’s just a testament to how great Coach Murphy is as a coach,” Watson said. “We don’t ever really look into statistics — we’re all about wins and losses. The fact that he has so many of those just shows how great he is. Hopefully, we’re going to go out there and get those wins for him.”

—Staff writer James Joyce can be reached at james.joyce@thecrimson.com.