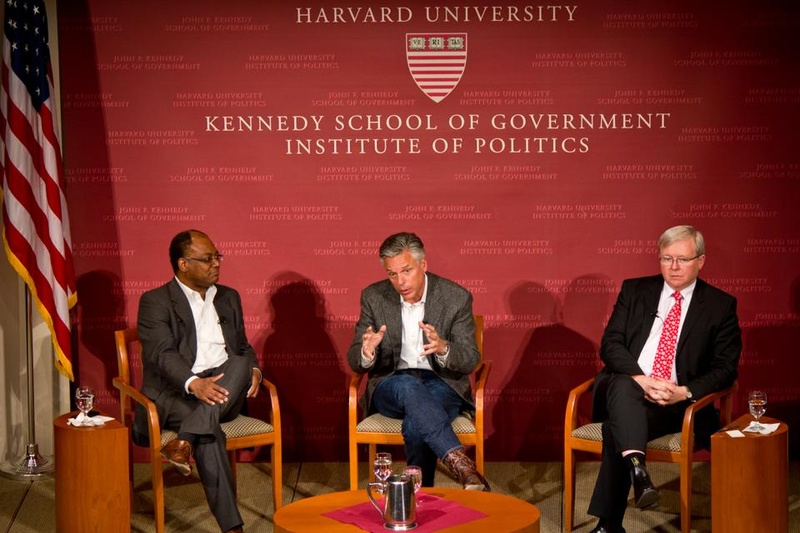 Huntsman, who sought the 2012 Republican presidential nomination before becoming a fellow at the Institute of Politics this spring, joined Rudd in saying that the nature of domestic politics in both China and the U.S. presents a rare window of opportunity for dialogue and cooperation between the two nations.

“Why do I think that the next year or two is so important? Because we’re away from the rhetoric of leadership changes and election cycles,” Huntsman said.

Whether or not China’s replacement of the U.S. as the world’s largest economy would create conflict is “the central question of the first half of the twenty-first century,” Rudd said.

Rudd noted that tension already exists between the U.S. and China in the form of “cyber conflict,” the use of the Internet to destabilize another country or entity’s technological infrastructure.

This does not rule out the possibility of cooperation, however. Huntsman said that in order to improve U.S.-China relations in recent years, the U.S. State Department has begun to place more value on individuals with expertise in Chinese politics, economics, and language.

“My fear is that we’re not producing a level of talent to serve our needs longer term,” Huntsman said.

Huntsman told The Crimson he sees a “profoundly sincere interest” in Chinese affairs at Harvard. ‘“As one of the leading institutions in the world, Harvard can’t help but recognize the shifting dynamics in terms of global order,” he said.

Michael Szonyi, director of undergraduate studies of East Asian Studies, said that despite growth of enrollment in China-related courses, “China is probably still not studied at Harvard to the extent that would be warranted by its international importance, though that is changing.”

“Beginning around 2000 the rise began and continued until four or five years ago when we hit are current number [of approximately 350]” Szonyi said.

The study of China has also expanded to various Harvard departments in recent years.

In China, a similar emphasis on cross-cultural studies has gained popularity. When Huntsman first visited China in the early 1980s, officials there were uneducated former revolutionaries, he said. Since those “old days,” officials in China have shown marked improvement in their knowledge of U.S. affairs and the English language.

“They have brought forward a capable cadre of top-level management,” he said.

Stanford To Collaborate with EdX on Online Learning Platform