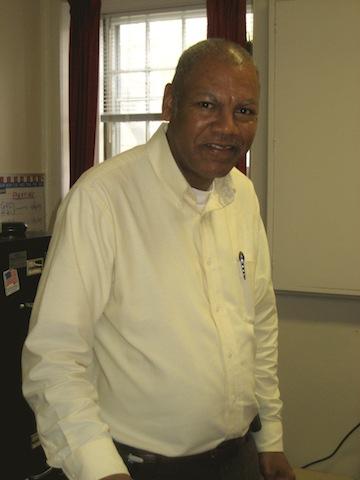 David D. Simms Jr., who served as superintendent and building manager of Winthrop House for 38 years, was remembered for his dedication, warmth, and humor. Simms died on Dec. 28 at 65.

Over the past nearly four decades, there have been few constants in the Winthrop House community. David D. Simms Jr., Winthrop’s superintendent and building manager for 38 years, was one of them.

Simms, who held the post since October 1974, died at Mount Auburn Hospital on Dec. 28 after suddenly falling ill in his office the week before. He was 65.

An email thread over the House list that began after the House Masters announced that he had been hospitalized tells story after story about how “Mr. Simms”—as he was known to the House community—had affected many members of the House in different ways. Usually, it was the small things they remembered—the times he gladly gave them a spare key when they were locked out of their rooms or went to great lengths to ensure that incoming mail packages efficiently reached their owners.

Undergraduates who had built personal relationships with Simms or worked with him remembered Simms as someone who, without fail, cared deeply about each student who passed through Winthrop House.

“He wanted to make sure that there wasn’t a student who came to the office and couldn’t get what they needed there,” said Alexis C. Gomez ’13, a Winthrop resident and Dorm Crew head captain who had worked closely with Simms.

Sitting in his office on the first floor of G-entryway with his door open, Simms would greet each person who walked past with an unmistakably warm “How you doin’?” He would then strike up a conversation and listen to students talk about their successes and struggles.

“You’re in the middle of exams. It’s winter. It’s cold. It’s dark. He’d make a joke—something about the news—he’d crack a joke, and you’d laugh,” said Jonathan M. Padilla ’12, a former Winthrop House resident who would frequently stop by Simms’s office to discuss politics and current events. “We needed the two to three minutes of humor a day to keep us sane.”

Sometimes, Simms would share his own stories as well—stories about Texas, where he went every summer to visit his extended family and indulge in warm weather and Southern barbecue. He told students that before coming to Harvard, he was a veteran of the U.S. Army who had served a tour in Vietnam, and that on the weekends he worked a second job as a guard for Eastern Security at the Longy School of Music of Bard College.

“He loved every one of those students,” said Mary A. Simms, Simms’s wife. She recalled that her husband would come home every day and talk about his work. “No two days were the same because it was always an adventure. Something always happened.”

For Winthrop students, Simms was the man to turn to when that something happened amid the hustle and bustle of academic and residential life. When the radiator stopped working or the roof started to leak, Simms would call for backup immediately. When a package arrived from home, Simms already had the student’s mailbox number memorized. When students forgot to put their boxes into storage in the spring or needed help removing them in the fall, Simms was there.

“He worked all of his time, and he never really asked for anything for himself,” said Zachary H. Goldberg ’14, who worked for Simms as a building manager assistant.

Raul A. Campillo ’09, a Winthrop resident tutor who also lived in the House and worked for Simms as an undergraduate, put it another way.

“He really understood that Winthrop House was everyone’s home away from home,” Campillo said. “He was synonymous with the House.”

Mary Simms said that in recent years, she would ask her husband when he would finally leave Harvard. Each time, Simms would say that “next year” he would retire and return to Texas, but “next year” never seemed to come. Even in the few months before he died, Simms repeatedly told her that 2013 would be the year.

“He was one of the longest serving building managers at Harvard—someone who clearly wasn’t doing it because he made fantastic money or because he wanted it to be some platform to some other position,” said Alexander G. Smith ’15, the current Dorm Crew captain of Winthrop House. “He really genuinely enjoyed the company of the students in Winthrop and was someone who, at the end of the day, cared about the well-being of the students.”

A funeral will be held on Friday morning at the Mount Olive Kingdom Builders Worship Center in Boston. Visitation begins at 10 a.m., and the service begins at 11 a.m.

—Staff writer Xi Yu can be reached at xyu@college.harvard.edu.