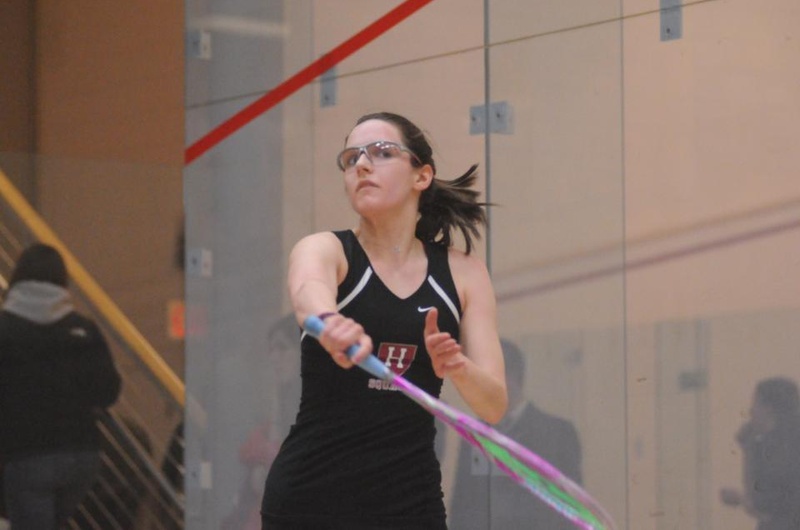 Playing at the No. 1 position, senior Laura Gemmell, shown in earlier action, swept her opponent to help the women's squash team top Williams, 9-0.

At the end of the Harvard squash teams’ matchup against Williams College on Wednesday night, the Crimson men’s and women’s teams had both shut out the Ephs, 9-0.

But for a night that came out perfect on paper, the meeting was marked by many a close call, especially for the men’s team.

“For our guys in a number of matches, the guys got into a deficit—too many to mention, about five matches like that,” Crimson coach Mike Way said. “They were in the trenches; they had nervous energy because they lost the first and they were down in the second; and they pulled it out.”

That pattern repeated itself in one nail-biter after another. Four of the top nine men’s players and one of the top women lost their first games before coming back to take their matches.

Many of the games were closer than the Harvard women (3-0)—the defending national champions—and the No. 3 men’s team (6-0) had anticipated going into their duel with Williams, whose women's team (2-6) is ranked 10th in the country and whose men's squad (3-5) is ranked 12th.

“We’re definitely going to have to raise our game,” said women’s co-captain Natasha Kingshott, noting that though the Ephs did not take a single match off the Crimson, Harvard’s upcoming challengers Princeton and Penn have already shown they can shut out the Williams women too. “This was a good wake-up call, matches like this where we have a couple results that were tight.”

Playing at the No. 4 spot, Kingshott took her own games by some of the widest margins of the meeting, beating Williams junior Alyssa Northrop, 11-3, 11-7, 11-2.

Senior Laura Gemmell—who also posted three easy wins in her match against Williams’ No. 1 Laura Henry with scores of 11-4, 11-3, 11-3—said the women, six of whom swept their opponents, were pleased overall with their performance.

“Everyone thought they were playing well was the overall vibe,” Gemmell said. But she said she wanted to focus on lessening her nerves so she can play “smart squash” instead of “scrappy squash.”

“I think on paper we’re a way stronger team. But we lost games we shouldn’t have lost,” she added.

The coach agreed, saying, “On paper we were supposed to win and we have—but how we did, the individual games, wasn’t perfect.... There are some things to work on: coming in maybe with a higher level of preparation, not being too relaxed even when you’re the higher-ranked team.”

Way praised the Williams squads. “Both teams looked very well prepared. The men’s team is very fit and just biting at the bit to play. You could just see it.”

Crimson freshman Matthew Roberts—who, competing at the No. 8 position, was one of two players whose matches went to five games—said, “I certainly didn’t underestimate my opponent. I just had an off day.”