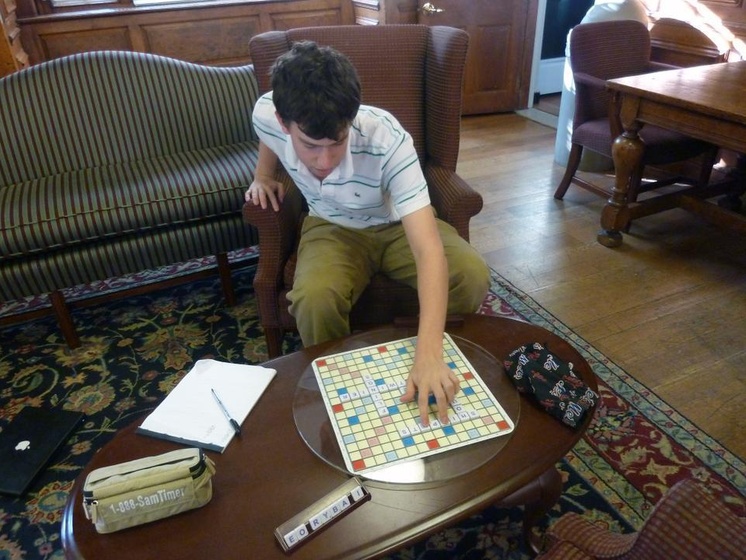 Courtesy of Sam P. Rosin Sam P. Rosin ’15 will compete in a competitive Scrabble tournament in Warsaw, Poland on Oct. 12 as part of the 15 member U.S. team.

A Champion Down to Scrabble

YZAZVYZ—the average Harvard student would dismiss these seven letters as gibberish, but Sam P. Rosin ’15 can rearrange them to ...

YZAZVYZ—the average Harvard student would dismiss these seven letters as gibberish, but Sam P. Rosin ’15 can rearrange them to form a word in a mere three seconds. To him, it’s obvious that these letters spell “zyzzyva,” a type of weevil and the name of a computer program he uses daily to train for the World Scrabble Championship.

Rosin will compete in the tournament in Warsaw, Poland from Oct. 12 to 16. As part of the 15 member U.S. team, Rosin will play 34 games over the course of the biennial championship. “It’s intense,” Rosin said, but he’s excited to meet the other contenders. “At Worlds two years ago, I had opponents from Uganda, Nigeria, Bahrain, Thailand, Singapore ... all over the world. [For many of the contenders,] English isn’t even their first language.”

Rosin’s Scrabble career began at the age of eight. He came across a book that his grandfather had given his father: “Word Freak: Heartbreak, Triumph, Genius, and Obsession in the World of Competitive Scrabble Players.” The book’s author, Stefan Fatsis, narrates his transition from sports writer and casual Scrabble fan to tournament-level contender. Rosin was fascinated by the story and joined his first Scrabble club. At age nine, he started beating his father and participated in his first local Scrabble tournament.

At age 16, Rosin was the youngest U.S. representative to ever make it to the World Championships and placed 39th at the 2009 Malaysia competition. In addition, Rosin has competed in the U.S. National Scrabble Championship seven times. In 2010, he came in 12th place.

Rosin’s most epic move ever? The word “LIQUORED.” Falling on two triple word score spaces, the move gained him 221 points. In the same game, he also achieved his highest final score of 723 points. “I don’t complain about my letters,” Rosin said. “It’s not about your tiles, it’s about the play you make.”

There are tricks of the trade to help him make these high-scoring plays—musical notes (such as do, re, mi), Greek letters, and Hebrew letters are all fair game. Moreover, if your opponent doesn’t challenge a word, the word stands. Rosin has successfully bluffed his opponents with made-up words such as “rootset” and “bosic.”

Rosin knows nearly all the words in “The Official Scrabble Players Dictionary,” and his career came full-circle when Fatsis chronicled his journey in the recently-published 10th edition of “Word Freak.”

Rosin is always looking to spread the joy of Scrabble. “Every game is very different; there’s always a new challenge,” he said. “I’ve played thousands and thousands of games, and I still make mistakes.” In high school, Rosin coached two young players, and he is now looking to start a club at Harvard. His one requirement to join? You must be DTS—Down To Scrabble.

Rosin can’t count the number of Scrabble boards he has at home, but FM challenged him to play on the one he brought with him to Harvard. A typical match should last approximately 45-50 minutes, as players have no more than 25 minutes to consider their moves throughout the game. As a result, Sam is consistently putting words on the board before we’ve even picked more tiles from the bag. In the course of the game, Rosin uses four triple-word spaces and uses all seven tiles in one move twice (called a “bingo,” this move awards the player an extra 50 points).

His highest single move gives him 67 points. The game is also a vocabulary lesson—we learn words such as “twinier,” “oho,” and “qat.” Unsurprisingly, FM was creamed 447 to 241, despite the fact that he passed up two turns to exchange tiles.