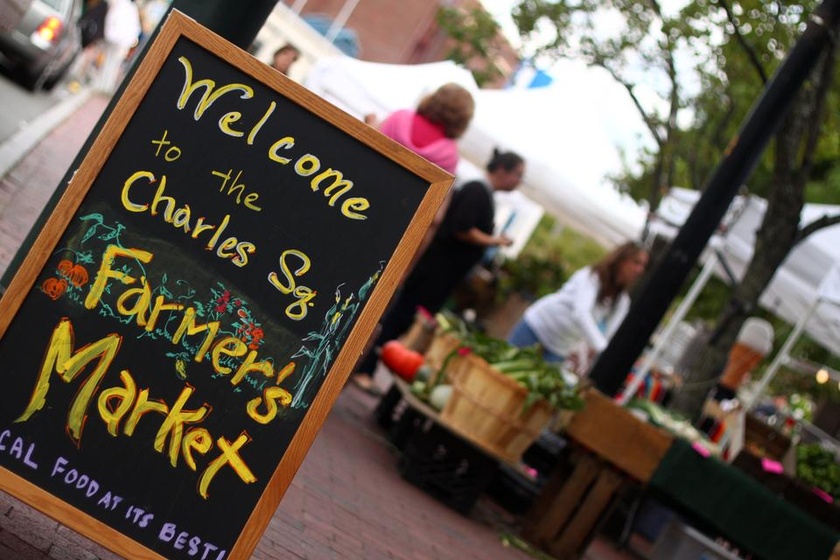 Keren E. Rohe A sign advertising the Charles Square Farmers Market stands in front of customers browsing through produce. The market offers produce, greeting cards, and baked goods, and will be open in front of the Charles Hotel every Friday and Saturday until November 21.

Satisfying a nagging addiction to homemade pasta after your summer in Tuscany, pursuing a passion for fresh goat cheese after ...

Satisfying a nagging addiction to homemade pasta after your summer in Tuscany, pursuing a passion for fresh goat cheese after working on a farm in Alaska, or satiating a craving for stone-ground chocolate after a month in Guatemala—interesting food experiences don’t have to end when summer does. With three local farmers markets to choose from, all three of these foods—and a wide variety of other fresh, locally produced products—are within walking distance of any Harvard dorm.

In addition to the two Harvard-run farmers markets—the Tuesday market outside the Science Center and the Allston market by the football stadium—locals and members of the Harvard community also have a third option: The Charles Square Farmers Market, which operates on Fridays and Sundays outside the Charles Hotel.

“It’s a societal piece we’ve been missing,” says farmer Andy H. Pollock, who harvests and sells his own produce from Silverbrook Farms in Dartmouth, Mass. “For 10,000 years, markets have been where you meet your community and exchange information.”

And as these three local markets show, farmers markets are indeed just as much about embodying and enriching their specific neighborhoods as they are about selling produce and crafts. Here’s FM’s roundup of your fresh local food destinations:

Every Friday, the Allston market transforms a vacant parking lot beyond the stadium from a colorless asphalt surface into a virtual country fair ground. From June to October, the market features fresh produce, baked goods, coffee, tea, pasta, soap, herbs, flowers, and hot sauce. With the most space of the three, the market is also able to host live music performances, set up tables with free samples, and host community events including scavenger hunts for children and food demos for senior citizens.

Robert F. Breslin, a n Allston resident, laments the brevity of the farmers market season, truncated by the arrival of inhospitable and persistent Massachusetts winters. “I can shop here without turning on the car, and it gets me experimenting,” he says. “I’ll buy things like striped pasta and blue potatoes that I’ve never heard of before.”

While the Allston market primarily serves members of the Allston community, the business school, and the athletics department, the Harvard market is mostly frequented by the wider Harvard community. According to Dara B. Olmsted ’00, manager of the Allston and Harvard markets and project coordinator for Harvard’s Food Literacy Project, the Harvard market sees more circulation because of its location just outside the northern gates of Harvard Yard. Students, staff, faculty, and locals can pass through and buy fresh produce, cheese, eggs, chocolate, crafts, flowers, and fresh fish.

“The markets bring the community together,” says Olmsted. “You can meet the farmers—the same farmers who supply the dining hall with local produce—and ask them about the squash you’re buying.”

As part of the Food Literacy Project’s mission to educate the Harvard community on food, the Tuesday market also features cooking demonstrations by professional chefs every week at 12:30 pm, including a yearly demonstration by famed chef Mollie Katzen.

For herbs, pastries, jams, crafts, pickles, pies, chocolate, and of course, fresh produce, check out the Charles Square market. Roger P. Allan, who owns and runs a “one man farm” in West Brookfield, Mass., explains that the products he sells at the Charles Square market have been picked either the morning of the market or the night before. “People come for the quality. The taste is so much different,” he says. “It’s all organic, it’s a lot of work, and I love doing it.”

According to Amanda R. Mallen, who runs the Taza Chocolate stand at several local markets, the Charles Square market is set apart from its neighbors by the demand it sees for specialty products. “Because of the location, we get a lot of leisurely tourists looking for gifts, guests at the hotel, or people from the neighborhood who are entertaining and want something special,” she says.

Mallen has observed that because of the importance of their surrounding neighborhoods, each market tends to reflect different social and economic realities. At the other location for the Taza Chocolate stand in Central Square, the market is more produce-based, and Mallen sees a more frequent usage of food stamps.

Bordering the low-income Charles View apartments, the Allston market also accepts food stamps through a program called Boston Bounty Bucks, cosponsored by the city of Boston and the Food Project based in Boston, which allows participants to get half off their purchase of up to $20 made at Boston farmers markets.

“It’s incentive for people to come who are out of the habit. You don’t find health food in low-income neighborhoods; you find lots of fast food restaurants,” says Campbell Watts, director of community programs at the Food Project. “If we can build the habit of eating healthy, fresh food, then stores in the area will be more likely to follow,”