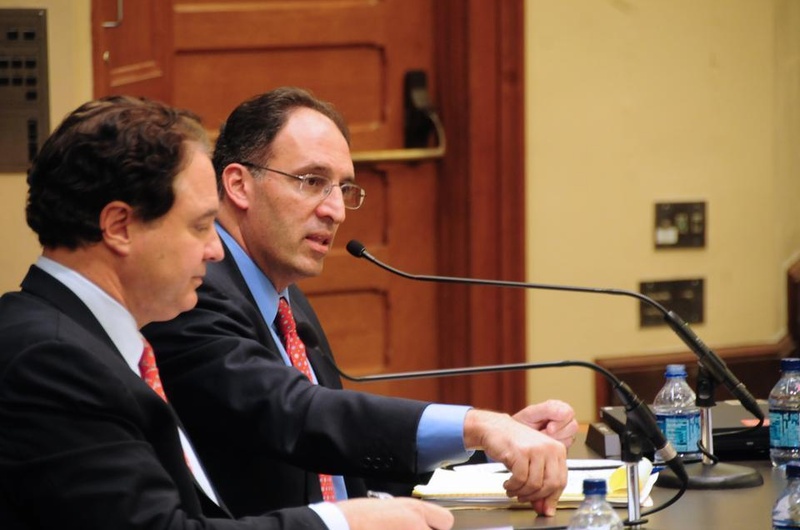 Businessman Stephen Pagliuca and social activist Alan Khazei ’83 battled it out yesterday in a debate held in Austin Hall at the Harvard Law School. Both men are running in the Democratic primary on December 8 to fill the seat of former Mass. Senator Edward M. Kennedy ’54-’56.

This discussion, portrayed as a battle of the alumni—Pagliuca graduated from Harvard Business School—brought together over 50 students and community members, drawing attention to the fast approaching primary elections. The debate was sponsored by the Harvard Law School, Business School and the Harvard College Democrats.

Khazei framed himself as a “social entrepreneur,” one who has spent his whole career in public service.

“We need a new approach, to get out of the tired debate of not Big Government versus Big Business, but rather Big Citizenship,” he said. “All of us need to get involved in politics. We each need to be involved in service. We all need to pick our causes we care about and join others for change.”

Pagliuca stressed both his experience in business, starting a venture capital fund that invested in health care companies, and his middle class roots.

“The issues that we are facing today: we have a job crisis. People are either out of work or they think they will be out of work.” He added, “I am really a representation of the American Dream...the number one thing you have to do is get an education.”

The only direct confrontation occurred with a question about accepting money from lobbyists or PAC’s, which both candidates eschewed. However, Khazei highlighted the personal wealth that Pagliuca, co-owner of the Boston Celtics and managing partner at private equity firm Bain Capital, was pouring into the race. Besides that, the two largely agreed on issues such as immigration reform and the current health care bill.

Students supporting the candidates stood outside Austin Hall with campaign signs and posters, and enthusiastically expressed their endorsements.

Jackson F. Cashion ‘13, said that he was supporting Alan Khazei because “he’s really inspiring with his work in public service”, which includes founding the non-profit organization City Year for urban development in Boston.

“[Mr. Khazei] does have a big group on campus, and does have youth support,” Cashion added.

Gabriel S. Neustadt ‘13, an intern on the Pagliuca Campaign, said that he thought Pagliuca’s character was needed in the Senate, even if he was an outsider and not a career politician.

“He pulled himself up and has the business experience to know how to work on the issues,” Neustadt said.