Popular Pub and Grille back in Square after year-long absence 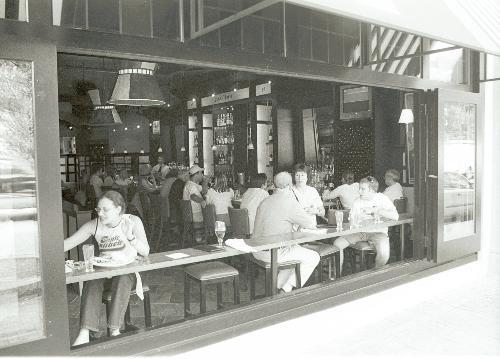 More than a year after it closed its doors on Massachusetts Avenue, Grafton Street re-opened at One Bow Street in the Square, about a block from its former location.

Grafton Street Pub and Grille bustled with activity this week, as the popular restaurant and bar reopened its doors for lunch for the first time in over a year on Monday.

The bar, now located at the One Bow Street Building that previously housed the legendary Bow & Arrow Pub, closed its original 1280 Mass. Ave. location last April to make way for renovations, including the expansion of the neighboring Cambridgeport bank.

Grafton owner Patrick M. Lee says that the new location has worked out well in the first weeks back in business. The new location opened for dinner on June 21, and lunch for the first time on July 1.

“Things have been going really well [since the opening],” Lee says. “There are a lot of old faces. We’re getting a lot of positive feedback.”

As Lee says, Grafton has quickly drawn back a group of regulars that had made it one of the most popular locations in Harvard Square.

“I now have a space to go again,” says Jerry J. Justin, a buyer for the Harvard Bookstore, who says he was used to conducting most of his business meetings from within the old Grafton.

He is happy to detail his frustrations with other similar establishments in the Square, which he says did not measure up to Grafton.

“Redline was kind of a replacement, but not quite,” Justin says.

“And at Deadalus, you can’t smoke... People tend to smoke a lot in the book business,” he explains, exhaling in perfect puffs between sentences.

Justin used to meet not only his business contacts at Grafton, but also members of the competition.

“A lot of people from the Harvard Coop also used to come here. We have a really good relationship with them,” he says.

However good the relationship, Justin is amused by the fact that Grafton Street’s new location may end up increasing the business of Harvard Bookstore, which is now located just a few businesses over from Grafton.

“It’s ironic, because this space belongs to the Coop, but it’s going to help us out—having such a hot spot right next door will get more people to come in,” Justin says.

But the relationship is synergetic, he adds.

“Oh, we send everyone [from our store] over here,” he says.

Customers and co-workers are not the only people Justin likes to meet at Grafton. His girlfriend used to come in every day to the old Grafton location for her lunch hour—a tradition he says they intend to reinstate.

The Best in Boston

With its reopening, bartender Paul Barry can once again be found behind the bar almost without fail everyday from 11 a.m. to 6 pm.

Barry has been named the best bartender in Boston by both the Improper Bostonian and the Boston Herald—a fact he isn’t shy about sharing.

“It has the best bartender in Boston!” Barry interjects about himself as Justin tries to explain his reasons for coming to Grafton.

Barry says he will soon have the awards on proud display in the bar when he has had time to settle in fully.

But immodest as he may be about the “Best Bartender” title, he seems even more proud of being “known as the Grafton Street bartender,” as he puts it.

Though he has worked behind numerous other bars, including Hard Rock Cafe Boston and Redline during the last year, he says Grafton is is most ideal fit.

“I resisted it at first,” Barry said in his Irish accent. “But then I realized I can’t get away from that.”

For Barry, who claims not only to have been bartending since the age of 12, but also to have been conceived behind a bar, his life vocation has as much to do with socializing with the customers as with mixing drinks and tapping beers.

After only a few hours at the bar on its opening day, Barry says “the customers have been flooding in,” with many regulars returning to their former lunch-time watering hole.

“It’s been like a family reunion—and I can still remember each person’s drink,” Barry says.

As in the old Grafton days, Barry sees himself as a cornerstone of his regulars’ lives.

On his first day back, he had already related a message between two of his old regulars, telling one former customer that her boyfriend will be late.

Grafton Street’s new layout lives up to its name. Like discreet side-streets off of bustling thoroughfares, the large space is filled with seating in nooks and crannies half-hidden behind the prominent tables and a highly-visible bar area.

The inventive set-up conjurs the spirit of the real Grafton Street, a fast-moving avenue in Dublin, Ireland.

And like any prominent public space, many different groups of people have transformed Grafton Street into their own private meeting grounds, regardless of its location.

Victoria Hicky sits at the end of the bar, having successfully reunited with her boyfriend Steve Walker-Rose after his late arrival, which had been relayed by Barry.

An outsider, Fred Dolman, joins them. He is an annointed “Hard Rock Cafe VIP” who grew to know Barry well while he worked there, and decided to follow him to his new locale for the day.

Dolman buys the last round for the group, who are roudily and good-naturedly joking with Barry, reminiscing on the old Grafton days, and gossiping about the more recent opening night party, to which Barry had invited them.

Grafton’s lunch hour attracts a very different crowd than the University students and young professionals who show up at night. But both groups mingled together for opening night.

For many, Grafton had served both as an extension of the office to a certain extent as well as as a regular gathering place—so much so, that at the party, Hicky says she knew or at least recognized many of the guests.

“Everyone was there!” Barry exclaims.

“It was strange seeing faces you hadn’t seen in so long,” Justin adds, explaining that “at the height of lunch time, you always saw the same people.”

One of those old steadfast lunch people, Jack F. Kaminski, has Barry refill his glass of Shiraz—he says red wine is good for his blood pressure—and joins in the conversation.

But while he says he is happy to have Grafton back, Kaminski says he will not become the regular he used to be.

Over the last year, he has gotten used to lunch at Daedalus and Redline, both of which opened since Grafton’s closing, and he plans on juggling the three for lunch.

“I also think I’ll wait a bit before coming here often again,” he adds matter-of-factly. “They’re still new here, and they’re going to need to get things ironed out.”

But the others are looking fondly ahead to a lasting number of Grafton lunches down the line.

They like the Grafton scene they have created—which is definitely Grafton by day.

—Staff writer Eugenia B. Schraa can be reached at schraa@fas.harvard.edu.

Law School To Produce ‘The Crucible’